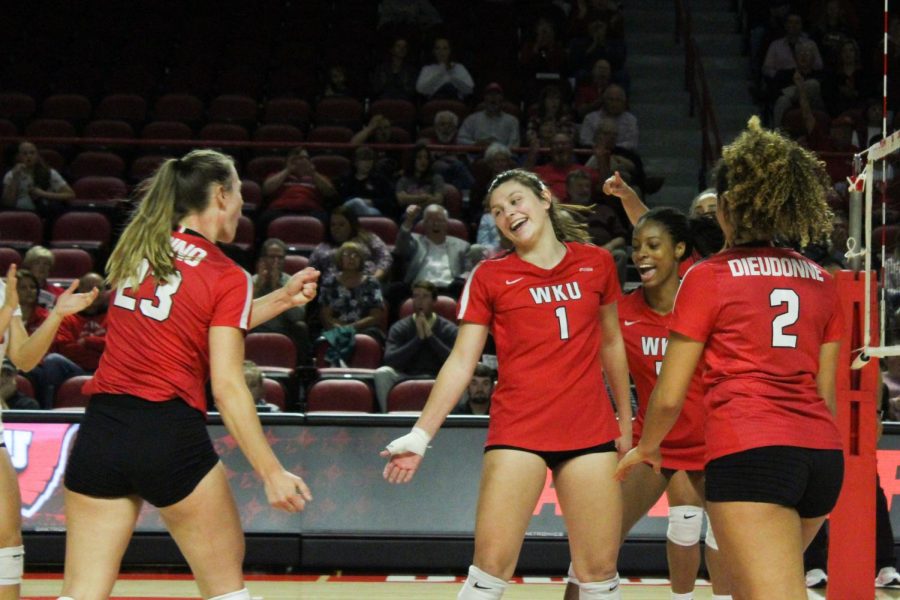 The Lady Toppers celebrate a point scored by freshman Paige Briggs (1) during Sunday’s game in Diddle Arena. Briggs had a total of 10 kills, five blocks, five digs, one ace and ended the game with a .320 hitting percentage.

WKU Volleyball sophomore Paige Briggs has been named to the 2021 CoSIDA Academic All-District II Team, the organization announced Thursday. Briggs is the first WKU Volleyball student-athlete to earn the distinction since Heather Boyland and Rachel Engle both accomplished the feat in 2014.

Briggs is just one of two C-USA volleyball athletes to be honored, joining Rice’s Nicole Lennon. The Ortonville, Michigan native is the 13th All-District selection in program history.

District II consists of all FBS and FCS DI programs in Kentucky, Delaware, Maryland, New Jersey, Pennsylvania, Washington D.C. and West Virginia. Nominees must be starters or contribute significantly to their respective programs while keeping a minimum 3.3 GPA.

Briggs maintains a 3.89 GPA while working towards a degree in visual studies with a minor in graphic design. She was named to the 2020-21 C-USA Volleyball All-Academic Team and has earned a spot on the President’s List during all four of her semesters at WKU.

Briggs is now eligible for the CoSIDA All-America ballot, which is set to be released later this summer. She joins WKU Football’s John Haggerty III and Juwuan Jones as the other eligible Hilltoppers for the ballot. WKU Volleyball’s one and only CoSIDA All-American is Natalie Furry, who earned third-team honors in 2000.

The full list of honorees can be found here.