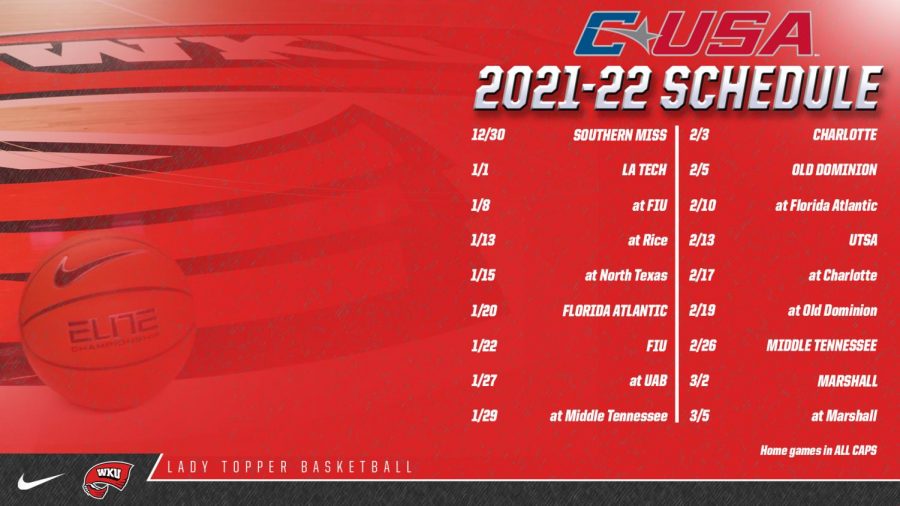 The Lady Topper Basketball program’s 2021-22 Conference USA schedule was announced by the league on Thursday afternoon.

WKU will play a total of 18 conference games, playing every East division team two times as well as six West division opponents once.

The Lady Toppers will play an even number of home and away games with nine home games and nine away games currently on the schedule.

As of this moment, streaming times and dates are undecided, but will be announced at a later date.

Louisiana Tech is coming to Bowling Green after splitting the series last season in Ruston, Louisiana. The Lady Toppers took game one 61-55 but would fall short to the Techsters 58-52 in the second game of the series. LA Tech leads the series 27-23 all time, but WKU has a 15-9 advantage on the Hill. The Lady Techsters finished last season with a 14-10 record, going 8-8 in conference play.

The Lady Toppers also split a series with FIU on the road last season, taking down FIU in game one 66-56, but falling short in game two 82-79. WKU is 32-10 all time against the Panthers, including an 18-2 record in Bowling Green and a 13-7 record in Miami, Florida. C-USA’s Coach of the Year, Jesyka Burks-Wiley led FIU to a 15-13 record with an 8-8 conference record in her first season as the Panthers head coach.

Rice was the 2021 C-USA West Division Champions with a 23-4 overall record as well as an impressive 12-2 record in conference play last season. WKU would fall short in both games in the series against the Owls but would not make it easy for Rice. The Jan. 13 matchup will be the fourth straight game between the two that will take place in Houston, Texas. The Owls have a 6-3 advantage over the Lady Toppers, including a 4-2 mark at home. Head coach Lindsey Edmonds will be in her first season as the head coach of Rice.

Although WKU and North Texas were scheduled to face off in 2019-20, hazardous weather conditions postponed last season’s matchup indefinitely. WKU has a 20-8 edge over the Mean Green, but the series is tied at 6-6 in Denton, Texas. The Mean Green went 13-7 last season with a 10-4 conference finish.

The Lady Toppers split a pair of games with Florida Atlantic last season in Bowling Green. WKU is 21-3 all-time against the Owls, including a 12-1 record at home and a 9-2 record in Boca Raton, Florida. The Owls finished 11-11 and 8-8 in conference play last season and will be under the direction of first year head coach Jennifer Sullivan in 2021-22.

Middle Tennessee was the C-USA East Division champion and tournament champion in 2020-21 with a 17-8 overall record and a 12-4 conference record. WKU fell in both games against the Blue Raiders at Diddle Arena last season. The Blue Raiders have a 45-33 advantage over the Lady Toppers. WKU has a 23-15 advantage at home, but the Blue Raiders are up 27-9 in Murfreesboro, Tennessee.

WKU and Charlotte played perhaps one of the most exciting series of the 2020-21 season within C-USA. The Lady Toppers won the first game 100-99 in triple overtime with a miracle buzzer beater three-pointer by WKU junior Meral Abdelgawad. WKU would take down Charlotte again the next day 65-64. The Lady Toppers are 15-0 against the 49ers at home and extended a seven-game winning streak. WKU leads the series 22-5 overall against the 49ers but is tied 5-5 against the 49ers in Charlotte, North Carolina. The 49ers would be crowned second in the East Division with a 10-12 overall record and a 9-5 conference record.

WKU played the Old Dominion Monarchs three straight times in the span of six days to end the 2020-21 season, taking on the Monarchs twice in Norfolk, Virginia and then again in the preliminary round of the C-USA Tournament in Frisco, Texas. The Lady Toppers fell in all three games but lost by a combined difference of 10 points. WKU is 17-12 against Old Dominion all time, including a 10-1 record in Bowling Green and an 8-6 record in Norfolk, Virginia. The Monarchs finished last season with a 13-11 overall record and a 7-9 record in conference play.

WKU and Marshall split their series last season with the Lady Toppers falling to the Thundering Herd in Huntington, West Virginia, but bouncing back with a 69-60 win in Bowling Green. The Lady Toppers are 15-2 overall against Marshall with a 9-0-win streak against Marshall at home and a 6-1 record in Huntington. The Thundering Herd finished last season 8-11 overall and were 7-9 in C-USA.