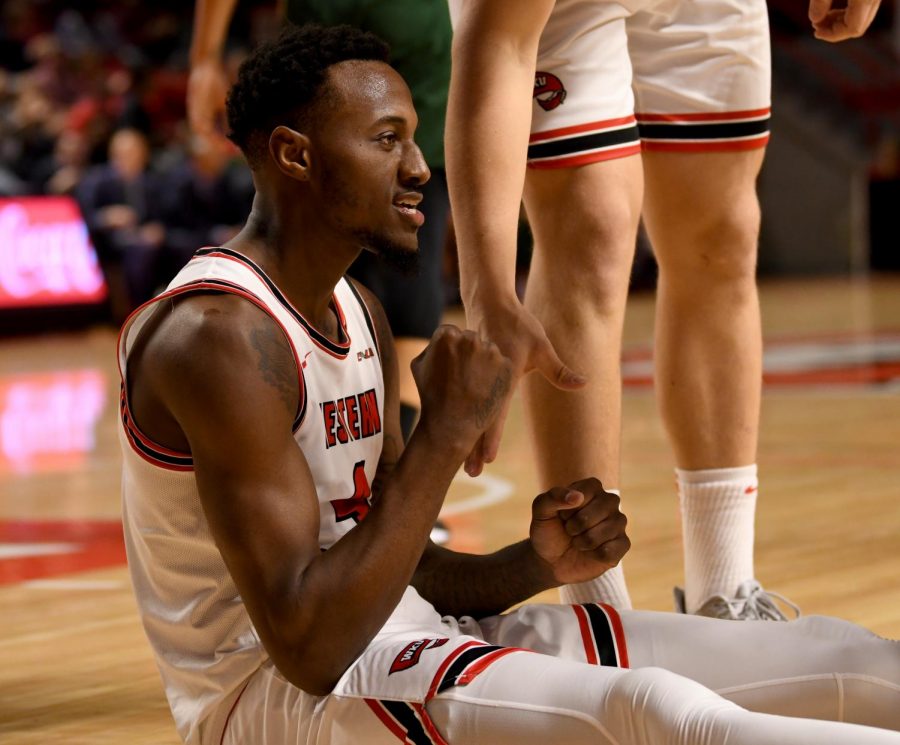 WKU guard Josh Anderson (4) celebrates after making a basket at the Charlotte v WKU basketball game on Feb 22, 2020 in Diddle Arena. The Hilltoppers were defeated 72-20.

A bye week will follow WKU’s matchup with the Bulldogs. The Hilltoppers then return to Diddle Arena for three straight games against FIU on Jan. 8, Rice on Jan. 13 and North Texas on Jan. 15. It will be just the fourth time in 11 meetings the Mean Green have faced WKU in Bowling Green and the Hilltoppers will be looking retribution after falling to UNT in overtime in the 2020-21 C-USA Championship Game.

A trip to Florida will see the Hilltoppers face FAU on Jan. 20 and rematch FIU on Jan. 22. A busy January will come to a close after WKU hosts both UAB on Jan. 27 and rival MTSU on Jan. 29.

The Hilltoppers will begin February with a pair of road games, traveling to Charlotte to face the 49ers on Feb. 3 and visiting Norfolk, Virginia to take on Old Dominion on Feb. 5. The Hilltoppers will return to Bowling Green for their second matchup with FAU on Feb. 10 before traveling to San Antonio to play UTSA on Feb. 13. Home rematches against Charlotte and Old Dominion will occur on Feb. 17 and Feb. 19 respectively before WKU travels to Murfreesboro, Tennessee to play the Blue Raiders for a second time on Feb. 26.

A home-and-home series against Marshall will close out the Hilltoppers’ regular season, with the first matchup taking place in Huntington, West Virginia on March 2 before WKU ends the year in Bowling Green on March 5 on Senior Day. The 2022 C-USA Basketball Championships will once again take place in Frisco, Texas on March 9-12.