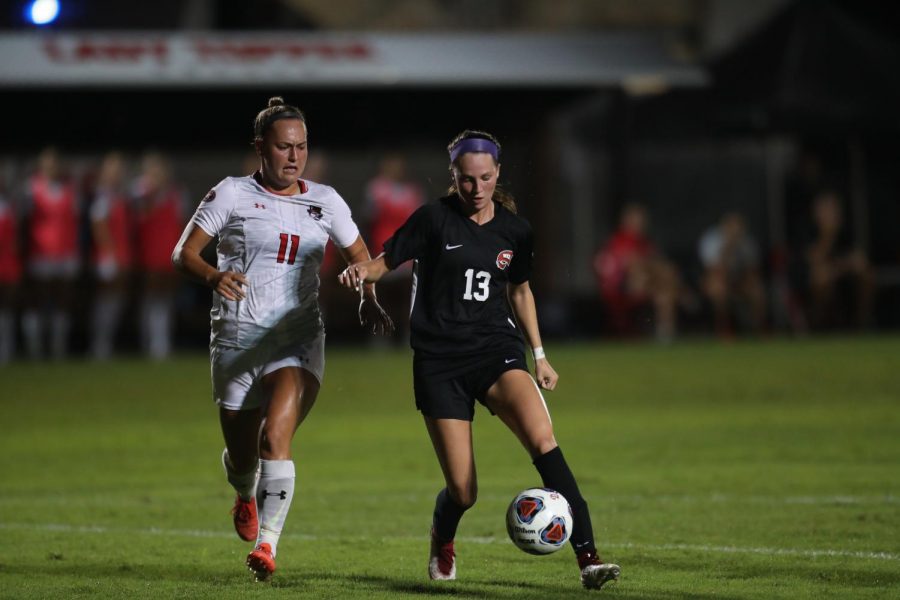 Junior forward Katie Erwin keeps the ball away from a defender during the Hilltoppers' season opener against Austin Peay on Aug. 19, 2021. Erwin would score a goal and provide an assist during the match.

WKU has found success in C-USA competition so far this year, defeating Marshall 2-1 in overtime on Sept. 16 and taking down the Middle Tennessee Blue Raiders 2-1 at home this past Sunday.

The UAB Blazers kicked off their season on the road for their first two matches. They were shut out 1-0 by Chattanooga but bounced back to take down Kennesaw State 2-1 before returning to Birmingham for their home opening match against Samford, which they lost 2-1 as well.

The next two foes on UAB’s schedule were powerful ranked opponents. The Blazers suffered a 5-1 defeat to no. 21 Arizona State at home and a 4-1 loss to no. 11 Auburn on the road. The next two matches in Birmingham wound up as draws with the Blazers tying 2-2 with Mercer and 0-0 with Alabama State before concluding their non-conference schedule with a 2-0 shutout loss to Alabama.

The Blazers opened conference play at home with a 2-0 shut out win over LA Tech and concluded the first week of conference play on the road in a 1-0 shutout loss to Old Dominion.

Senior midfielder Stella Kiss is perhaps the strongest weapon at the Blazers’ disposal with five points on the season coming from a pair of goals and an assist. Junior midfielder Asha Zuniga is the next-best performer on the roster with four points coming from two goals.

The Lady Toppers and Blazers will take the field at BBVA Field on Friday, Sept. 24 with opening kickoff set for 7 p.m. CT.