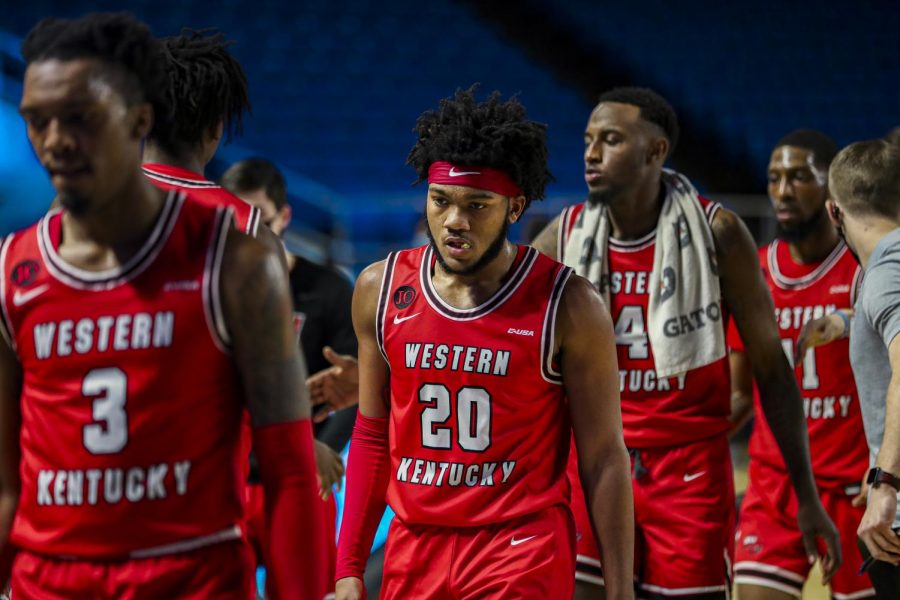 WKU freshman Dayvion McKnight makes his way over to the Hilltopper sideline during their game at MTSU on Jan. 24, 2021. McKnight was held scoreless in game two on Sunday.

WKU’s non-conference schedule for the 2021-22 season was revealed via Twitter on Thursday.

The slate features matchups with Power Five programs like Ole Miss, Minnesota, South Carolina and Louisville along with contests with other fearsome programs like Memphis and Buffalo.

“This is one of the most challenging schedules we’ve had, but at the same time, it presents lots of great opportunities,” head coach Rick Stansbury said in a press release. “All of those challenges will help prepare us for conference play and competing for another championship. We can’t wait to have Diddle Arena back at full capacity this season, and there’s no better way to welcome back Hilltopper Nation than with a record number of home games in front of a packed house. We also hope to see our fans on the road this season for several marquee games within driving distance in our region.”

The team will play 18 home games throughout the season, a record-tying amount. Five of WKU’s non-conference games are against programs that finished in the top 90 of last season’s NET ratings. There is still room for one more game in the Hilltoppers’ non-conference selection.

The regular season begins in Diddle Arena on Nov. 9 against the Alabama State Hornets. WKU will then hit the road for a three-game stretch.

WKU will participate in the 2021 Asheville Championship on Nov. 12-14, facing the Big Ten’s Minnesota Golden Gophers on Nov. 12 and facing either South Carolina or Princeton on Nov. 14.

Stansbury’s squad will then travel to Memphis, Tennessee to face the Tigers, who are projected to begin the year ranked in the top ten. Memphis is the reigning NIT champion, but WKU defeated the Tigers 75-69 last season in the Crossover Classic.

The Hilltoppers then return home for six out of their next seven games. Alabama A&M comes to town on Nov. 24 and the UT Martin Skyhawks visit on Nov. 27. EKU will come to Diddle Arena on Dec. 4, the 159th all-time meeting between the programs in a rivalry that dates back to 1914.

Buffalo will visit Bowling Green on Dec. 8 to wrap up the homestand. It will be the first time the Bulls have faced the Hilltoppers. Following this, WKU heads to Atlanta to face Ole Miss in the Holiday Hoopsgiving event at State Farm Arena on Dec. 11.

Centre College comes to Diddle Arena on Dec. 14, the alma mater of legendary WKU coach E. A. Diddle. Louisville will then pay a visit to the Hill on Dec. 18 for a battle of in-state rivals. It will be just the third time WKU has hosted the Cardinals and first since 2014.

Non-conference play will close with a trip to Tennessee to face the Austin Peay Governors on Dec. 22. WKU’s full conference schedule can be found here.