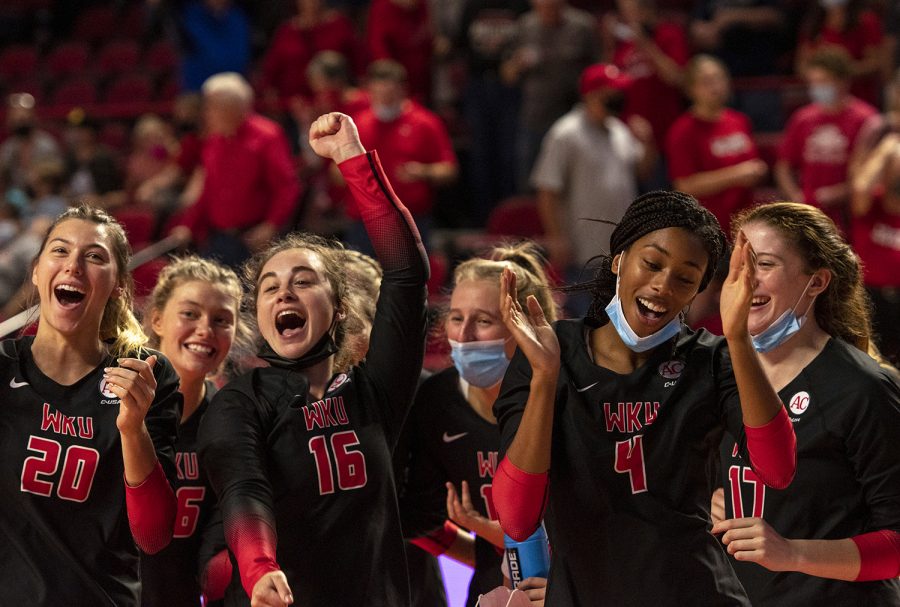 The WKU volleyball team celebrates after winning the match against St. John’s University at Diddle Arena on Sept. 18, 2021.

The Hilltoppers are heading into conference play with some major momentum.

WKU, the No. 22 team in the nation, hosted the WKU Volleyball Invitational at Diddle Arena last weekend and swept Ohio, Austin Peay and St. John’s 3-0.

This weekend, the Hilltoppers will be facing long-time rival Marshall at home on Friday, Sept. 24 at 6 p.m. and Saturday, Sept. 25 at noon to kick off WKU’s conference schedule.

In a press conference held on Monday morning, assistant coach Craig Bere took the time to share what he thought were some highlights from his team’s performance at the WKU Volleyball Invitational.

“Our blocking for the weekend was good, we averaged over three blocks a set on the weekend which is a really high number for us,” Bere said.

Despite a perfect weekend at home, serving is still an area that needs focus.

“Our serving kind of ironed out a little bit too, that’s something we’ve been focusing on,” Bere said. “We’ve been inconsistent, we’d had a great weekend of serving then we’d have an ok weekend, and this weekend we kinda bounced back and that really impacted play significantly.”

Bere also emphasized some of the things the Hilltoppers will need to watch out for against Marshall, a tough defensive program. WKU defeated the Herd 3-0 and 3-1 last season, but both matches proved tough.

“They’re returning six starters I think, plus their libero, so the talent is there,” Bere said. “They’ve got a lot to challenge us with. One category that stands out for them that will create a challenge for us is their blocking, [Marshall] is probably leading Conference USA if I’m not mistaken.”

“They’re a very good blocking team so that will definitely create a challenge for us,” Bere continued. “We’re going to have to play pretty clean offensively.”

Admission is free for students for both Marshall games and guests who show their WKU Football ticket for Saturday night’s game against Indiana will receive free admission to the match as well.