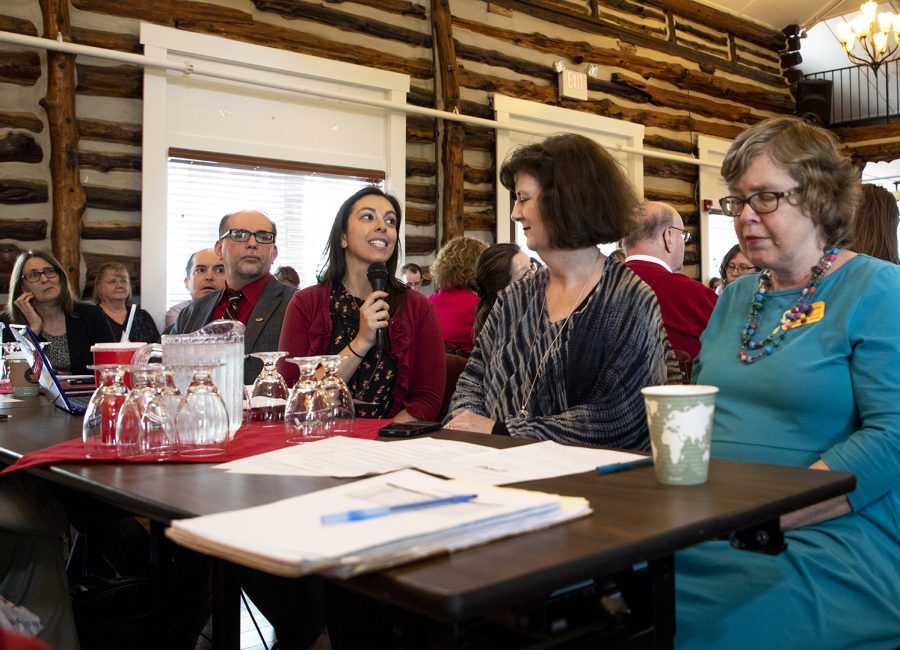 Associate professor of sociology Lauren McClain speaks in front of fellow faculty and staff during the monthly University Senate meeting on April 18, 2019.

Editor’s note: In a previous version of this story, a member of the faculty senate was quoted without context. The quote has been removed and the story has been corrected. The Herald regrets the error.

The Faculty Senate discussed the possibility of mandatory coronavirus vaccinations, changes to the spring semester calendar and the recent COVID-19 numbers in the Sept. 23 meeting.

As colleges and universities across the country implement mandatory COVID-19 vaccinations for their students and employees, WKU has not followed suit.

During the meeting, the question of enforcing such a mandate came up for discussion with strong feelings on both sides of the debate.

One such opinion came from Kirk Atkinson, a senator from the Gordon Ford College of Business, who was “very much opposed” to the idea of a mandate.

“I believe that is a choice between the medical professional and the individual,” Atkinson said.

Although some senators favored a mandate, they were hesitant to make such a resolution citing enrollment concerns. Matt Pruitt, a senator from the Potter College of Arts and Letters, expressed such reservations.

Requiring a vaccination mandate for students “might affect enrollment,” Pruitt said. Prior to Pruitt’s comments, Associate Provost Rob Hale reported that this year’s enrollment was down 741 students, both graduate and undergraduate, compared to last year’s number of 15,313 students.

Following discussions on a resolution proposal, senators voted on whether or not they support a university-wide mandate. 48% voted yes, 23% voted no, with 18% voting yes but with an opt out feature in favor of weekly testing and natural immunity.

Even if the senate recommended a mandate resolution “it is unlikely for the administration to follow” Pruitt said.

In a final vote, the senate recommended the idea to the WKU Faculty Welfare Committee with 85% approval.

Hale, speaking for Provost Bud Fischer, said that President Caboni, the provost and the president’s cabinet have talked about making changes to the schedule.

“I don’t think there’ll be any drastic tweaks, and [we] hope to have that information finalized in the next week or two,” Hale said. “The cabinet has to review these tweaks before we can move forward.”

As the fall semester has progressed, Environmental Health and Safety Director David Oliver has noticed a decline in COVID-19 cases within the WKU community. Since the university added 96 cases during the Aug. 31-Sept. 2 reporting period, individual case counts have dropped into the teens. The newest report documented 13 new cases.

“We noticed no major spike in cases, even after our first football game,” he said. “[Vaccinations] are not where we want them to be, but we’re moving in the right direction.”

Other business discussed at the meeting can be found on the full Faculty Senate agenda.