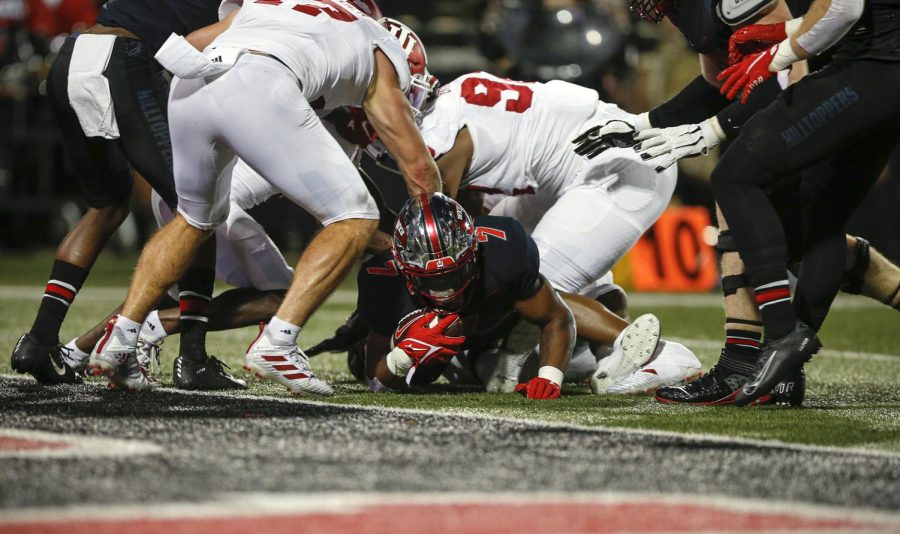 Western Kentucky University senior running back Adam Cofield (7) is tackled at the one yard line during Saturday night’s game against the Indiana Hoosiers in Houchens-Smith Stadium. The Hoosiers won 33-31.

WKU lost a thriller to the Indiana Hoosiers on Saturday night, playing its Big Ten opponent close but ultimately coming up short 33-31. WKU could have walked out of Houchens-Smith Stadium with its first-ever win over a Big Ten program if some fourth down plays were called differently and if the Hilltoppers avoided a handful of costly penalties.
4th Down Mishaps
First things first, let’s talk about the fourth down mishaps the Hilltoppers had against the Hoosiers on Saturday night.

WKU drove up the field down 17-7, putting itself in field goal range. The Hilltoppers had a third-and-one, but instead of going for a quarterback sneak they opted for a shotgun handoff that was stuffed.

WKU head coach Tyson Helton then made the call to go for it on fourth down instead of opting for a 40-yard field goal attempt from redshirt sophomore kicker Brayden Narveson, who made all six of his attempts from 40-49 yards in 2020.

Narveson’s stats aside, going for it on fourth down is all about momentum, and WKU had the game flow on its side after scoring its first touchdown and forcing Indiana into a long field goal the drive prior.

Still, the play chosen on fourth down was baffling. WKU handed the ball off to six-foot, 215-pound running back Kye Robichaux who was stuffed at the line of scrimmage. A play to get quarterback Bailey Zappe moving with the option of both running or passing would’ve made for a much better play call.

Helton’s decision to punt the ball on a fourth-and-one just past midfield in the fourth quarter with the Hilltoppers down 26-24 was also puzzling.

WKU drove the ball 46 yards to the Indiana 48, building momentum along the way. The crowd unleashed a chorus of boos once the punt unit came onto the field.

As stated previously, the decision to go for it on fourth down depends on the momentum of the game. Choosing to punt took the wind out of the Hilltoppers’ sails.

The Hoosiers then put together a 14-play, 86-yard drive that led to their first touchdown since the first quarter to put the game out of reach.

“We had stopped them two times in a row, we had made them punt two times in a row, and so we were playing solid defense,” Helton said after the game on Saturday, explaining the decision. “… I wanted to make them have to go the distance, and there was plenty of time left on the clock… if we had crossed midfield, if we’d have been in that 38 [yard range], somewhere in that range I probably would have [gone for it].”

Trusting a defense that had surrendered 414 yards of offense up that point is not the best decision.
Penalties, Penalties, Penalties
The Hilltoppers shot themselves in the foot repeatedly throughout the game with game changing and momentum swinging penalties.

Indiana lined up for a 51-yard field goal to increase its lead to 17-7 in the second quarter. The kick was no good, but an offsides call on WKU gave Hoosier kicker Charles Campbell another chance, this time converting his attempt.

“We had some penalties in the first half that were costly in my opinion,” Helton said on Saturday. “Fact of the matter is, we lined up offsides on a field goal. Take that away, it’s a different game, right? Those are the things that lose games, so we’ve got to do a better job in the first half of not having the penalties that hurt us.”

Neither of the fourth downs Helton made a questionable call on exist if there wasn’t a WKU penalty on first down that pushes the offense back. WKU totaled four penalties on offense and seven on defense.
Defense Continues to Struggle
The Hilltoppers’ defense allowed 507 yards of offense and 11 third-down conversions in the game, seven coming on third-and-five or longer.

WKU’s struggles in run defense continued, allowing Indiana running back Stephen Carr to rush for 118 yards on 4.4 yards per carry and two scores.

WKU defensive coordinator Maurice Crum needs to figure out how to slow down opposing team’s rushing attacks, especially since WKU is scheduled to face the No. 17 Michigan State Spartans on Saturday. The Spartans boast a top 25 running offense and junior running back Kenneth Walker III is averaging 7.3 yards per carry, 12th best in the country.