Lady Toppers to clash with Rice Owls, perfect C-USA records on the line 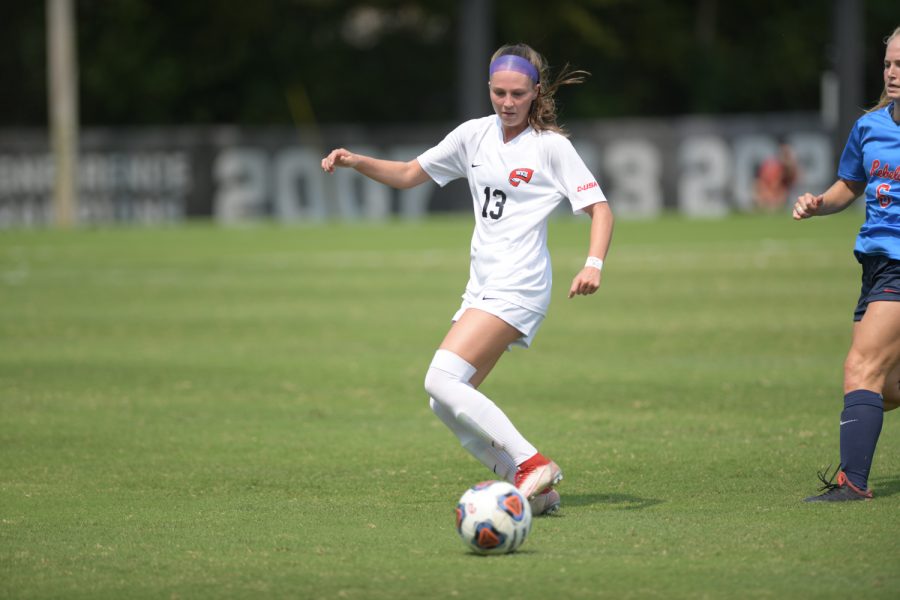 WKU junior forward Katie Erwin (13) dribbles past a defender during the Lady Toppers' match against the Ole Miss Rebels on Sunday, Sept. 12 2021 at the WKU Soccer Complex. Ole Miss went on to win 1-0.

The Lady Toppers are currently ranked no. 31 in RPI, suffering only one loss to Ole Miss. WKU is currently undefeated in conference play and most recently took down the UAB Blazers 1-0 in double overtime.

Freshman midfielder Briana Sayoc scored the golden goal in that contest, firing a shot into the back of the Blazers’ net in the 109th minute of play to prevent a draw.

Junior forward Katie Erwin continues to anchor the Lady Toppers’ offense, notching two goals and four assists for a total of eight points so far this season. Graduate defender Avery Jacobsen has scored three goals and two assists this season for eight points of her own.

Rice shut out Charlotte 2-0 in the C-USA championship back in the spring to qualify for the national playoffs. This season the Owls have defeated every one of their opponents except SMU, Penn and Texas and the program received 52 votes in this week’s United Soccer Coaches Top 25 poll.

Rice junior midfielder Delaney Schultz is one of the Owl’s most reliable scorers, contributing six goals and six assists for 18 points this season. Junior forward Caleigh Boeckx will be another tough opponent for WKU as she has tallied nine points off three goals and three assists.

The Lady Toppers will be facing off against the Owls at the WKU Soccer Complex on Saturday night with kickoff coming at 7 p.m. CT.