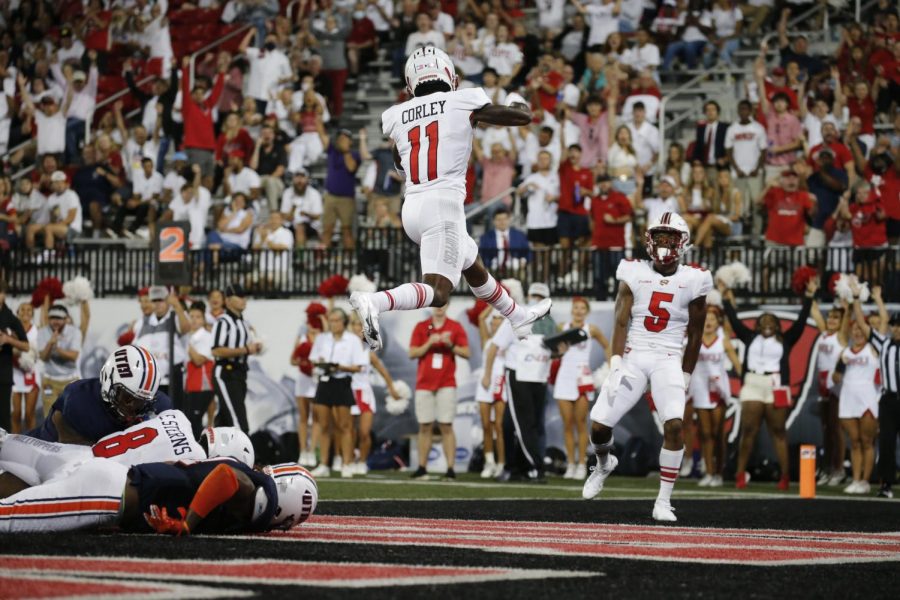 WKU travels up to East Lansing, Michigan to face the No. 17 Michigan State Spartans at 6:30 p.m. CT Saturday night. Below are the key things the Hilltoppers need to focus on to pull off the upset and win their first-ever game against a current Big Ten program:
Stopping Kenneth Walker III
The Spartans boast one of the nation’s best rushing attacks, averaging 215.5 yards per game on 5.9 yards per carry. Michigan State junior running back Kenneth Walker III leads the nation with 554 rushing yards on the season. His 7.3 yards-per-carry average is tied for 15th in the nation.

“He’s so talented with his ability but he’s hard to tackle as well,” WKU defensive coordinator Maurice Crum said on Wednesday. “He’s a strong runner. He has a great burst, great speed and exceptional vision behind that offensive line that works well together. It’s kind of like the perfect cake. They put it all together, baked it, and it came out just right.”

WKU ranks 11th worst in the nation at stopping the run, allowing an average of 224.7 yards per game while allowing 4.8 yards a carry. Last week, the Hilltoppers allowed Indiana’s graduate running back Stephen Carr to rush for 109 yards on 4.4 yards per carry and two scores.

“I think the main thing is just tackling,” redshirt senior defensive tackle Jeremy Darvin said on Wednesday. “Just keeping it simple football and just tackling. Going back to film this past game against Indiana,  there were a lot of missed tackles that we could have had… We missed those opportunities, so cherishing those tackling opportunities is definitely a thing we’ve been focusing on this week.”
Protecting Zappe
Michigan State has gotten to opposing quarterbacks with ease this season. The Spartans rank fifth in the nation in sacks with 16. WKU has protected graduate quarterback Bailey Zappe well all season, allowing just four sacks. This great protection has allowed the Hilltoppers’ air raid offense to flourish with the nation’s best passing attack.

“I think we’ve been really, really good in pass protection all year,” WKU offensive coordinator Zach Kittley said on Tuesday. “I think that’s been one of the strengths of our offense so far. The offensive line and coach Hamby, they’ve done a tremendous job keeping [Zappe] off his back and that’s of high importance.”

Zappe has thrown for over 350 yards while completing at least 70% of his passes in all three games this season. Zappe has found the endzone 14 times through the air while hitting seven different Hilltopper wide receivers.

Junior wide receiver Jerreth Sterns has led the way with 23 catches for 360 yards and four touchdowns while freshman wide receiver Malachi Corley has come out of the gate hot, catching 20 passes for 184 yards and two scores.

“I think the best thing Malachi has done is he’s really taken it upon himself to understand the offense, and he’s done a phenomenal job,” Zappe said. “He’s a very smart player. He understands what I’m looking for and he understands the checks that I want. Also, he’s a heck of a blocker, he’s one of our best blockers on the receiving corps.”
Starting Hot
The Hilltoppers have enjoyed abysmal starts in all three of their games this year. Zappe threw an interception on the first possession of the first two games and last week against Indiana WKU went three-and-out to start its first drive.