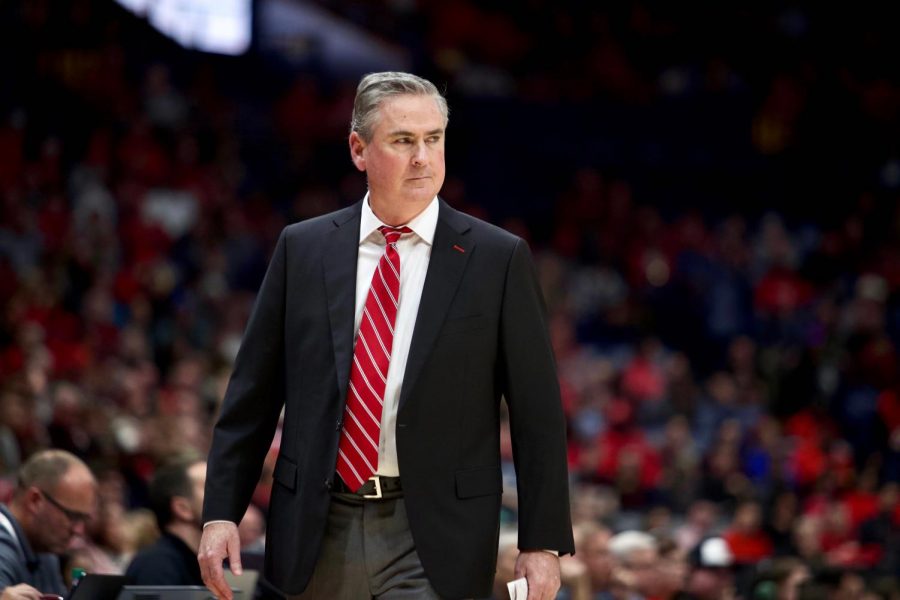 WKU head coach Rick Stansbury looks toward the floor while his team plays the Cardinals. The Cardinals defeated the Hilltoppers 71-54 in Bridgestone Arena on Sunday, Nov. 17, 2019, in Nashville.

“We started two-a-days last Monday…we got a lot of new pieces…I like my pieces, we just have to put our pieces together but we’ve made progress and we have miles and miles to go,” head coach Rick Stansbury said. “Early in your practices you are just trying to establish how you are going to do things. The effort and attitude you play with, that’s your foundation always. At the end of the day we have good people and we’re making progress with that everyday.”

WKU turned to the transfer portal this offseason and brought in a lot of transfers from both junior college and division one schools. A total of six players have transferred in from different schools and three true freshmen have joined the roster.

Conference USA will return to division leagues for conference play for the 2021-22 season but without back-to-back games. WKU will play each team in its division twice, at home and away, while playing teams in the C-USA West Division once.

“Our league has gotten really good from top to bottom,” Stansbury said. “It’s not like several years ago when the Florida schools were bad or the Texas schools were bad, any of those teams can beat you. Those top four or five teams in our league can beat anybody anywhere on any given night.”

Stansbury spoke on the Hilltoppers’ tough non-conference schedule, a slate that includes meetings with strong Power Five teams in Minnesota, Ole Miss and Louisville as well as early tough matchups against Memphis and Buffalo.

He mentioned that in C-USA, it doesn’t matter how well you perform in the non-conference part of the schedule. If you lose in conference play, it puts you in a bad place in terms of Rating Percentage Index, so winning as many conference games as possible is extremely important. WKU is 9-6 against the Power Five as a whole in the last four years.

Stansbury also talked about how his team never had a full film session together and never ate a meal together where they weren’t extremely spread out last season. During the stretch of time when WKU played just four games in the month of February, the team only practiced for 19 days and on 14 of those days only four players were able to participate due to others getting covid or contract tracing protocols.

Stansbury closed by sharing that all but one of his players is vaccinated. All members of the coaching staff have also returned for the upcoming season.

WKU will open up the season on Nov. 9 against Alabama State at Diddle Arena. Tip off is set for 7 p.m. CT.