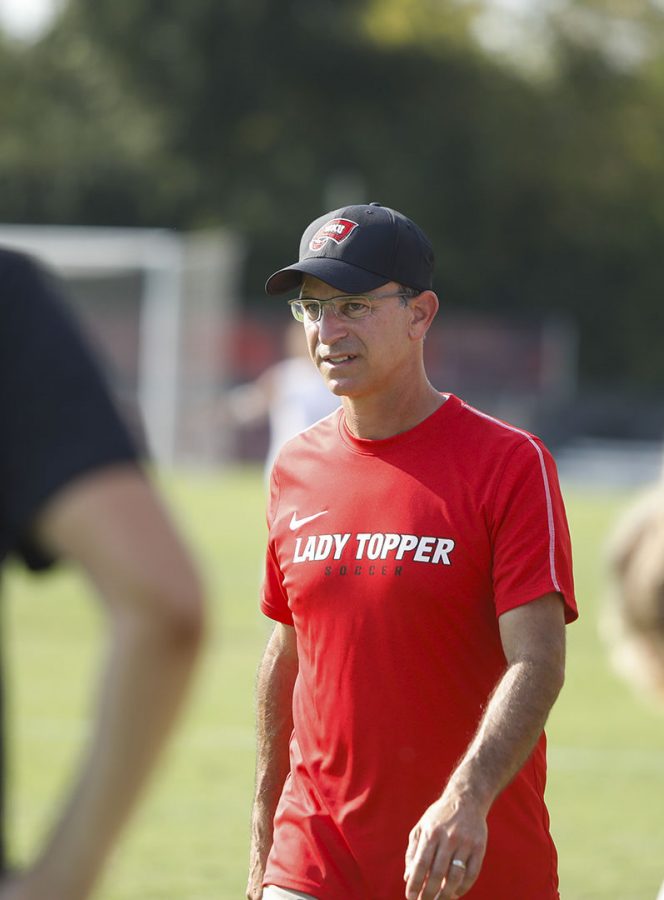 WKU women's soccer head coach Jason Neidell walks towards a Lady Topper reserve to give her directions in the second half of overtime during a game at the WKU Soccer Complex on Sunday, Sept. 29, 2019.

ODU and WKU are both perfect in conference play and the top spot in the Conference USA East Division is on the line. Neidell is confident that Friday’s meeting between the two programs will be a defensive showdown.

“ODU is an enormous challenge,” Neidell said. “They are a very good team defensively, they don’t give up a lot of opportunities on goal, and then they are very dynamic and creative, building through the middle of the field. They’re going to present some pretty big challenges for us. Your guess is as good as mine, it should probably be a low-scoring but entertaining affair.”

Neidell also expressed how pleased he has been with the team’s performance this season as a whole.

“The season has been an incredible joy,” Neidell said. “All the credit to our student-athletes. They have been exceptional in every respect. Their preparation for matches, their total buy-in, their commitment to the game, the commitment to each other. It’s been a really fun ride up to this point and we’re just excited to be in the mix, to be having this conversation right now.”

The Lady Toppers finished up the 2020-21 season in the spring due to the COVID-19 pandemic’s effects on scheduling and the team only had a handful of months off to prepare for the fall season. Neidell shared how his group is doing health-wise after such a short offseason.

“We are doing extremely well,” Neidell said. “We played a lighter schedule this year. A normal fall season is 20 games. We only have 15 regular season matches this year; we did that on purpose because it was a quick turnaround. Now we’re in the segment of the season that we only have one game a weekend besides the following weekend after ODU.”

Neidell went on to recap his team’s performance against the Rice Owls on Saturday, a 2-0 shutout for the red and white.

“We finished out the Rice game extremely well last week, but I think that’s game to game,” Neidell said. “I think we’ve done a pretty good job in training of trying to replicate situations and trying to train those kinds of situations.”

Neidell also laid out who on the Monarch’s roster presents the biggest threat to his program on Friday. His answer? The whole squad.

“All of them,” Neidell. “They’re a very good team, they don’t have a weakness on the field. They are incredibly good through the midfield. They’ve got a center forward who’s quite good… anyone can hurt us at anytime.”

The Lady Toppers will battle the Monarchs for the top spot in the C-USA East Division on Friday, Oct. 8 at the WKU Soccer Complex with kickoff set for 6 p.m. CT.