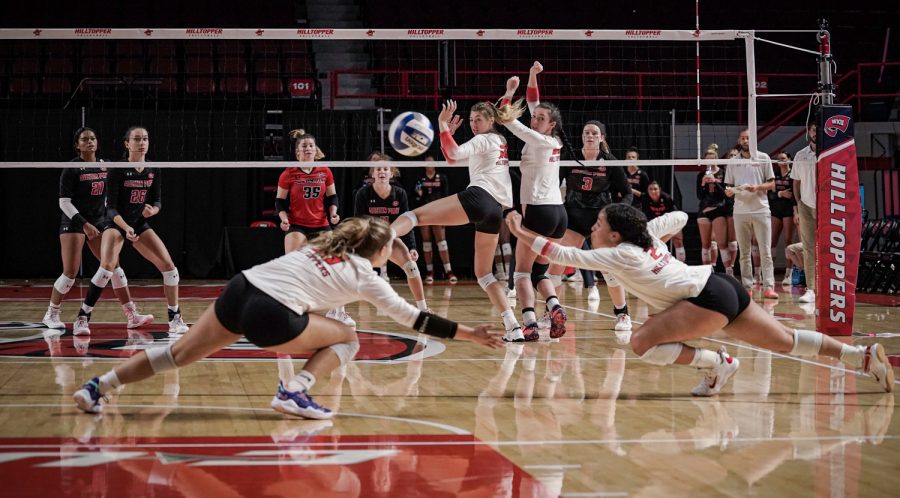 No. 20 WKU Volleyball (16-1, 4-0 C-USA) swept the Eastern Kentucky Colonels (5-14, 2-3 OVC) in Richmond, Kentucky on Wednesday evening in the Hilltoppers’ first match in McBrayer Arena since 1995. It was the program’s ninth sweep in a row and 19th consecutive road victory, the longest streak in the nation.

Junior outside hitter Paige Briggs led the way for WKU with 20 kills and senior middle hitter Lauren Matthews was in close second with 15 kills on the night.

The Hilltoppers quickly raced off to an 8-4 lead in the early stages of the first set A Hilltopper offensive barrage led by Briggs pushed WKU’s lead up to six. WKU held a 15-9 lead over the Colonels at the first media timeout.

The Colonels called their first timeout of the match shortly after the media timeout ended as WKU put another two points on the board and led by eight.

The Hilltoppers took the first set 25-16 as Matthews and Briggs led the way with five kills each.

WKU went up 3-0 in the early stages of the second set. Matthews and Briggs continued to lead the team as Briggs reached 10 kills and Matthews took her eighth.

The Colonels called another timeout trailing by five when Matthews hit her ninth kill of the match.

WKU took the second set 25-17 with the Hilltoppers compiling a .368 hitting percentage.

A service and an attack error by the Colonels gave WKU the first two points of the third set. WKU continued to dominate, taking a 10-4 lead with Briggs sitting at 16 kills and Matthews at 12.

WKU soon had an 11-4 lead and the Colonels were forced to call another timeout. Two consecutive kills by senior middle hitter Katie Isenbarger put WKU up 18-9.

Briggs’s 18th kill forced EKU to call a timeout as the Hilltoppers led the Colonels 21-13. A comeback effort from EKU made it a four-point game with WKU leading 23-19.

The Hilltoppers took the last set of the match 25-21 as Matthews recorded the final kill of the night to complete the sweep of Eastern Kentucky.

The Hilltoppers will return to Diddle Arena on Oct. 15-16 to continue conference play with a two-match series against Middle Tennessee.