Sparky Notes: Where oh where has the defense gone? 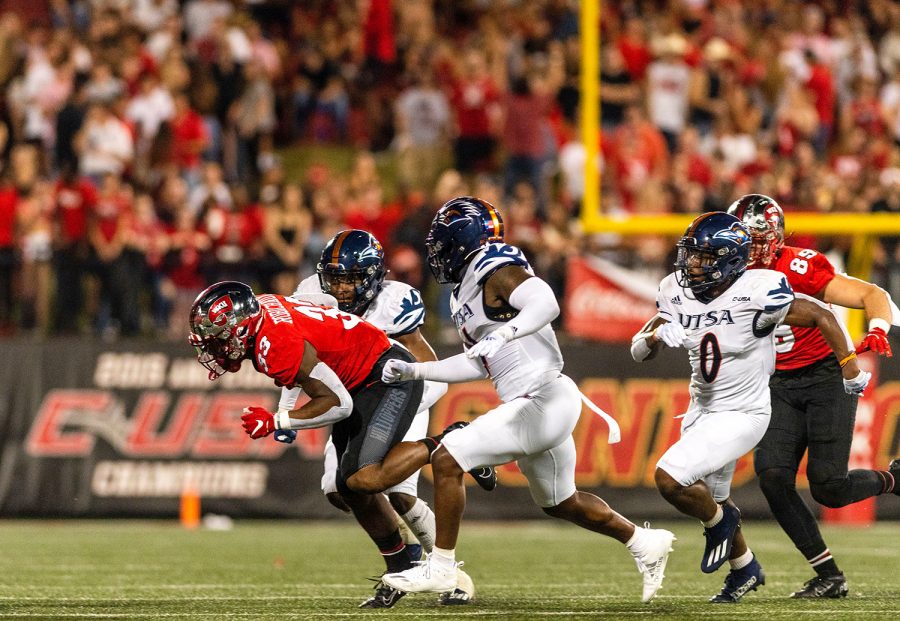 WKU freshman running back Kye Robichaux is hounded by UTSA's defense during the Hilltoppers' 52-46 loss to the Roadrunners at Houchens-Smith Stadium on Oct. 9, 2021.

WKU lost its first Conference USA game Saturday night to the UTSA Roadrunners in a 52-46 heartbreaker. The Hilltoppers put up one of the best offensive showings the nation has seen this year, but two things stood in the way of victory: undisciplined football and the underperforming Hilltopper defense.
Undisciplined football
The Hilltoppers repeatedly shot themselves in the foot at crucial points in Saturday’s game. Let’s first highlight the chop block call on freshman guard Quantavious Leslie and redshirt senior tackle Cole Spencer that took WKU from a second-and-goal on the one-yard line back to a first-and-goal on the 20-yard line with just over a minute left in the game.

The play was designed to get the ball out quickly to junior wide receiver Jerreth Sterns, but on the opposite side of the field, Spencer and Leslie performed an illegal chop block on a player that wasn’t going to be involved in the play at all. Three plays later, graduate quarterback Bailey Zappe tried to force a tight pass that ended up in the hands of UTSA’s Clarence Hicks, ending WKU’s comeback.

This was not the only crucial fourth quarter penalty of the night for the Hilltoppers. At the start of the quarter, WKU’s defense faced UTSA with a third-and-five at the WKU 44-yard line.

UTSA senior quarterback Frank Harris was forced outside the pocket into a bad throw, but WKU safety Antwon Kincade interfered with his receiver on a ball that most likely would not have been caught, putting UTSA in field goal range and handing the Roadrunners a first down.

If WKU gets off the field at that moment, Zappe doesn’t have to force a pass on the last drive because the Hilltoppers would have been down by a field goal instead of a touchdown. These plays sum up the whole season for the Hilltoppers – a bunch of what-ifs.

WKU totaled eight penalties on the night. The first didn’t come until the third quarter.  Freshman running back Noah Whittington converted a third-and-five on a 22-yard dash, but a holding call on Leslie nullified the conversion.

WKU had their third-and-15 conversion nullified on the very next play after Mitchell Tinsley ran out-of-bounds for an illegal touching call.
The disappearing act of the Hilltopper defense
The Hilltopper defense has given up over 500 yards of offense to opposing teams in three consecutive games, 1,590 yards in total. The defense has just been plain bad this season. Last year, under former defensive coordinator Clayton White, the defense never gave up more than 500 yards in a single game.

The Hilltoppers’ pass rush, led by senior defensive end DeAngelo Malone, has been disappointing to say the least. WKU has totaled just five sacks this season, tied for fourth-worst in the nation.

The defense struggled to get off the field on Saturday, allowing UTSA to go 3-for-3 on fourth downs, one attempt going for a touchdown. This is something the Hilltoppers have struggled with all season. They are worst in the nation in third-down defense and 12th worst in allowing fourth-down conversions.

This has led to WKU giving up 30 or more points in its last four games while ranking seventh-worst in the nation in points allowed on the season. To add insult to injury, If WKU puts up 46 points against any other FBS team this past week, the Hilltoppers beat all but 12 out of the 100 programs that played.

WKU has one of the best offenses in the nation capable of beating some elite teams, but football is a team sport for a reason. The phrase “defense wins championships” couldn’t ring more true for WKU this year.