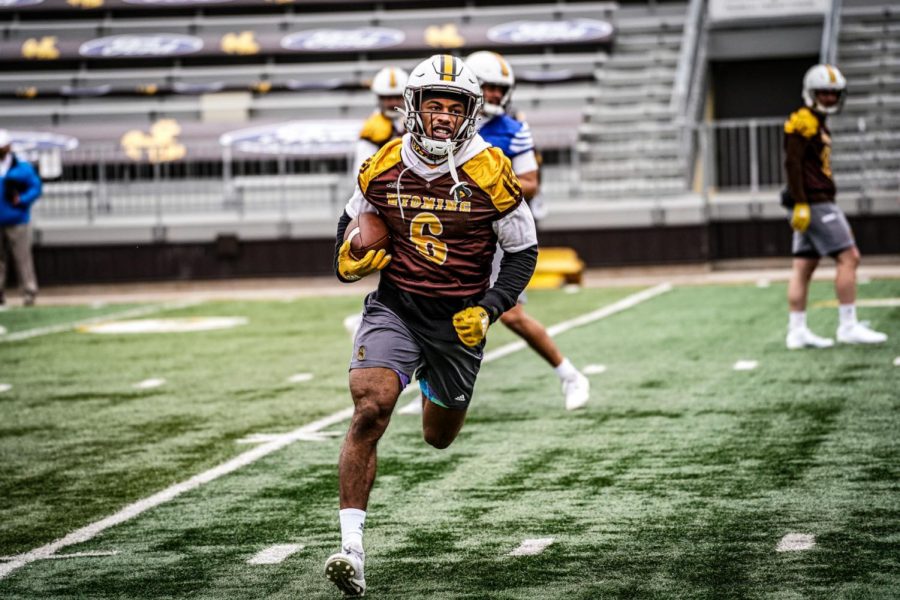 Wyoming running back Xazavian Valladay runs through a drill during spring practice April 6 at War Memorial Stadium in Laramie.

LARAMIE — Sean Chambers isn’t the only significant piece to Wyoming’s offense looking to get through a full season with a relatively clean bill of health.

Sure, Wyoming’s quarterback will garner most of the attention in that regard given his well-documented injury history, but Xazavian Valladay also has aspirations of getting through the spring and this fall as close to full strength as possible. The Cowboys’ No. 1 running back admitted it’s been on his mind a lot this offseason.

“I was thinking to myself that, playing football, I haven’t been through 12 games without an injury,” Valladay said. “That’s one of my biggest goals that I’m trying to focus on is what can I do to stay better, stay longer on the field and just be more of a durable back instead of leaning more toward (being) injury-prone?”

Fortunately for Valladay, the injuries he’s sustained haven’t been significant enough that he hasn’t been able to finish a season. But they’ve been nagging enough to slow him down and even keep him on the sideline at times.

In his first season as the Cowboys’ primary tailback, Valladay led the Mountain West in rushing (1,265 yards) despite injuring his knee late in the 2019 season and needing braces and wraps to help him get through it. In the fourth game of UW’s abbreviated season last fall, Valladay suffered a lower-leg injury in the second quarter against UNLV that was severe enough to keep him out the rest of that game and all of the next one. Valladay returned for UW’s season finale against Boise State but was limited to just 11 carries, a far cry from the 27.3 carries he was averaging before the injury.

He still finished second in the league in rushing on a per-game basis (110), but Valladay is fully healthy again this spring and would like to keep it that way through next season. There are no guarantees for players who touch the football as much as Valladay normally does over the course of a game, but Valladay said he’s doing as much as he can off the field to take care of his body and get it more prepared for the rigors of a full season.

“Spending more time on the little things as far as being in the training room more and treating my body,” said Valladay, who’s up to 198 pounds. “The moneymakers are my legs, so if I don’t take care of my legs, I’m not going nowhere.”

Being part of a backfield that’s fully intact again should also help. Valladay’s primary running mate, Trey Smith, took advantage of the NCAA’s free year of eligibility by choosing to return for a third season with the Cowboys, giving UW what should be one of the Mountain West’s top 1-2 punches on the ground next season.

Smith had a pair of 150-yard rushing games in Valladay’s absence and averaged 5.5 yards per carry last season. Titus Swen, UW’s third-leading rusher in 2019 as a true freshman, has returned to the team after opting out last season. Dawaiian McNeely, who served as the No. 3 back last season, is also back.

With that many experienced options, carries could be more evenly distributed, which would help limit the number of hits Valladay has to take.

“For (Smith) to get his time going, get his reps in and for me to take a blow, I like how the rotation is,” Valladay said.

But UW still figures to get plenty of touches for its most versatile back in Tim Polasek’s offense, which Valladay said utilizes backs as receivers out of the backfield as much as runners. Valladay, who’s already racked up 2,575 all-purpose yards at UW, had the second-most receptions on the team last season (13) and has caught two touchdowns.

“That’s one thing I’m trying to improve in my game is catch the ball and be more of a slasher,” Valladay said. “Whatever I can do to help this team better ourselves and better our offense, I’m just excited for that. Taking what (former offensive coordinator Brent) Vigen did and just expanding it a little bit more, which I think Coach Polasek is doing.”