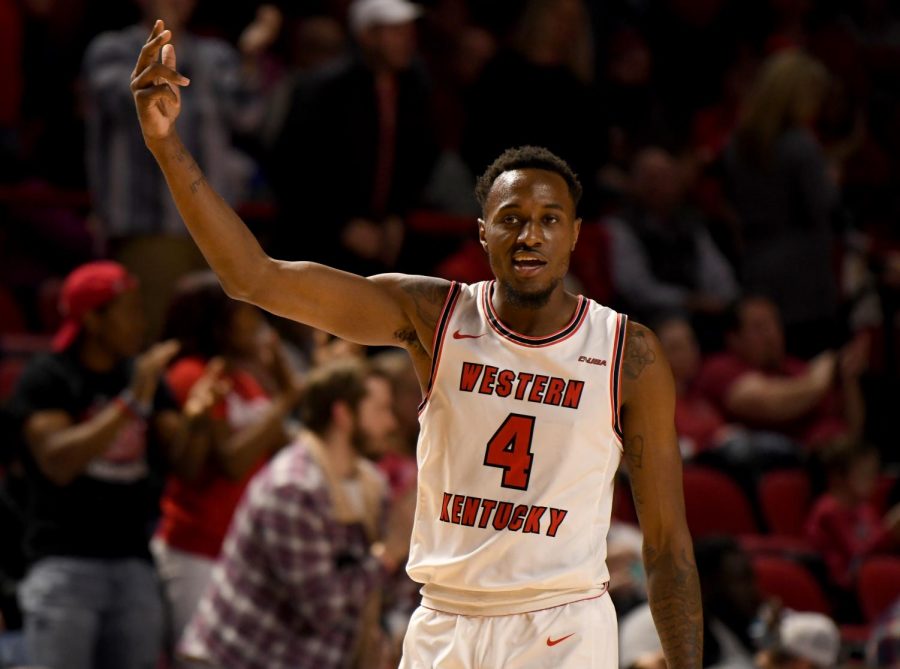 WKU guard Josh Anderson (4) encourages the crowd to get louder after the referees made a call against Charlotte at the Charlotte v WKU basketball game on Feb 22, 2020 in Diddle Arena. The Hilltoppers were defeated 72-20.

Another season of Hilltopper basketball is almost here.

This is Anderson’s first award of this kind as former teammates Taveion Hollingsworth and Charles Bassey were both selected for the honor for the last two seasons.

Anderson is set to become the first Hilltopper in program history to earn five letters with the team. He enters his fifth season ranked 37th in WKU history with 1,136 career points and fifth all-time in steals with 168.

He shot 84% from the charity stripe, 45.6% from the floor and 33.3% beyond the arc. Anderson also finished fourth in the league in free throw percentage and fifth in steals.

The fifth-year guard was named to the league’s All-Defensive Team following the 2020-21 season.

The Hilltoppers were also picked to finish third in the league this season, the first time the program has not been the favorite since 2017-18. WKU was selected as the highest-ranking east division team as UAB picked up eight first place votes and Louisiana Tech garnered six to leapfrog the Hilltoppers.

Additionally, the Hilltoppers’ 2021-22 broadcast schedule was announced. 13 of WKU’s games, including its away matchup against Memphis, will be available on ESPN+. The Hilltoppers’ game against Minnesota in the Asheville Championship on Nov. 19 will be shown on ESPNU and WKU’s game in the second round will air on ESPN2 or ESPNU.

Five of the Hilltoppers’ home games will be streamed via ESPN3, which is free with a valid cable or satellite subscription, and will also air locally on WKU PBS. WKU’s Feb. 13 matchup against UTSA will only be available via CUSA.tv.

The 2021-22 roster will take the court for a pair of home scrimmages, the first against Campbellsville on Nov. 1 and the second against the University of the Cumberlands on Nov. 5. Neither of the exhibitions will be televised.