‘This Is Us’: Will Kevin’s Exes Disrupt His and Madison’s Wedding Plans? 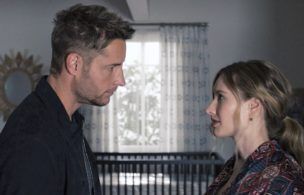 [Warning: The below contains MAJOR spoilers for Season 5, Episode 12, of This Is Us, “Both Things Can Be True.”]

This Is Us is expert at dropping juicy bombs and, in the April 6 episode, “Both Things Can Be True,” the sudden reemergence of past characters could throw a wrench into some pretty big plans. See Also‘This Is Us’: Will Uncle Nicky’s First Love Sally Be His Future Wife?
The Pearson patriarch seems to have taken his first healing steps toward that Season 4 wedding band.

The various former loves of Kevin’s life notice news of his engagement on the cover of a tabloid magazine and, with smiles on their faces, pick up copies to peruse. While it’s a nice nod to the Pearson son’s past, we’re wondering if it’s a sign of things to come.

Sure, it could be nothing more than a fun tipping the hat to Kevin’s relationships, but it just easily portend some loosening of the bond he’s worked hard to nurture with Madison, with whom he now has twins. They’re growing closer with each passing day, and Madison’s relationships with the rest of the Pearsons have flourished since first making friends with Kate (Chrissy Metz) years ago. But is she the right woman for Kevin? Which leads to another question: Are his emotional ties to any one of the other women stronger than the stability he’s found with Madison?

Sophie will always hold a special place in Kevin’s heart as his first and longest love. Meanwhile, he and Zoe ended things amicably, but it was Kevin’s drinking and her personal demons that eventually drove a wedge into their life together. And Cassidy came into Kevin’s world when he began chumming around with long-lost Uncle Nicky (Griffin Dunne), bonding over shared struggles and eventually coming together in Pennsylvania before he returned to Los Angeles. While it seems as though the book has closed on Kevin’s previous relationships, could any of them be invited to the wedding, or cause some pre-wedding disruptions? Sophie’s ties to the Pearsons are lengthy and her respect and admiration for Kevin make us believe that she’d attend such a milestone event if asked. As for Zoe, she’s Kevin’s sister-in-law Beth’s (Susan Kelechi Watson) cousin, making her family by marriage, and she could slip into the guest list that way. And with Cassidy serving as an emotional crutch for Nicky, we could easily picture him bringing her as his guest to the upcoming shindig. There’s always a chance these three could amount to nothing more than Season 4’s brief appearance of Breckenridge’s Sophie, who spots her ex on a billboard in New York, laughs, and then carries on with her day. Or, it could be the gateway for more returns.

Let us know what you think in the comments below — did Kevin’s exes pop up for brief cameos, or will be hearing more from one or more of them as the wedding plans progress?