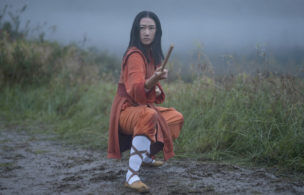 Are you looking for shows that both adults and kids will love? There’s plenty of options with new and old titles to entertain a range of ages. Below, we round up 8 excellent choices for everyone in the family.

Inspired by the old-school David Carradine TV Western, this modern take follows young Chinese American Nicky Shen (Olivia Liang), who returns to her San Francisco home after a life-changing trip to China. She battles street crime with her fists and feet — and definitely not as the lawyer her parents expect her to be. Teens

See Also8 Shows Families Will Love Watching Together, From ‘Mighty Ducks: Game Changers’ to ‘Kenan’
Fluff the couch, gather round and enjoy some cross-generational entertainment.

All aboard! The fourth and final season of the fantasy anthology—which moved from Car-toon Network to HBO Max in 2020—is pulling in to the station. On deck for the last ride: a fresh tale about a pair of BFFs and aspiring rock stars who wake up on the mind-bending locomotive. Tweens

This small-town sitcom is the latest project from The Good Place creator Michael Schur. It follows Nathan Rutherford (Ed Helms, also an exec producer), a descendant of the Northeast town’s founder, who goes to battle over a long-standing monument that has become a traffic hazard. Teens Former Superman Dean Cain hosts this two-hour celebration of the best in family TV and movies. Nominees include Daisy Ridley for Star Wars: Episode IX–The Rise of Skywalker and Angelina Jolie for Maleficent: Mistress of Evil. Plus: The Brady Bunch cast receives the Best Iconic Television Series Award. Everyone

Spend a night with the spooky Addamses on Sunday, April 18, starting with Season 1, Episode 29’s “Morticia’s Favorite Charity” (9/8c). As we know, “their house is a museum,” so when the annual charity bazaar comes up, matriarch Morticia (Carolyn Jones) offers to donate the original flogging table used by Ivan the Terrible. “Just picture the addition it would make to someone’s home,” she croons. Just wiggle your nose and tune in for weekday magic in the noon/11am c hour with stars (from left) Elizabeth Montgomery, Dick York, and Agnes Moorehead of the 1964–72 series. On Monday, April 12, enjoy both parts of Season 5’s “Cousin Serena Strikes Again,” and see witch Serena (Montgomery) take a spin through Samantha’s (also Montgomery) house on a noisy motorbike.

Hi-yo, Silver! This classic Western, which aired for five seasons, from 1949 to 1957, gallops in and out of FETV’s nostalgic schedule throughout the week. Don’t miss the four-hour marathon on Saturday, April 17, that shows off a slew of Season 4’s 1955 episodes in order. It starts at 2/1c and goes from “The Bounty Hunter” to “The Return of Dice Dawson,” in which the Lone Ranger and his Native American companion Tonto (Clayton Moore and Jay Silverheels) save the day. The Lone Ranger  (Credit: Courtesy of the Everett Collection)

On Netflix, you’re bingeing The Crown, but your kid wants to watch Sofia the First — don’t let it become a royal issue! Create a new profile so you can track your favorite shows separately. Choose the “Add Profile” plus sign on the “Who’s Watching?” page. Type in a name and, if you want, check off “Kids,” which will only show content rated for age 12 or under.