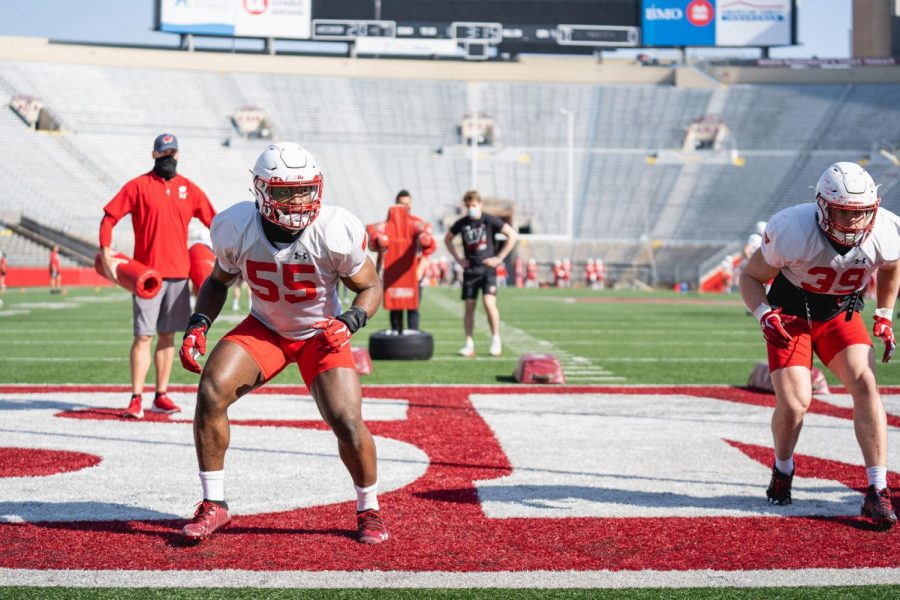 UW linebacker Maema Njongmeta (55) dealt with a hernia and a torn groin along with COVID-19 and a heart-health scare in 2020, limiting him to one game.

Maema Njongmeta was wracked with fear for a few weeks last September.

Njongmeta, a sophomore inside linebacker for the University of Wisconsin football team, tested positive for COVID-19 in the early days of that month. It was his second significant health scare of 2020 following a hernia that required surgery in July.

Njongmeta underwent a heart scan after his COVID diagnosis, part of the Big Ten Conference’s protocol after a player contracted the virus. That scan revealed a pericardial effusion, or excess fluid between the heart and the sac surrounding the heart, and doctors were concerned it was caused by COVID.

“That was probably one of the least good days, one of the worst days I’ve had on campus. Just panicking,” Njongmeta told reporters Wednesday. “Especially at the time, we didn’t know a lot about COVID, and so it was like, ‘All right, is this the end of the season, end of my career type situation?’ The doctors didn’t have any answers at that point other than, ‘Hey, you can’t practice or play until further notice.’ So that was definitely a rough stretch.”

Njongmeta said all doctors and trainers could tell him in the short term was that he wasn’t allowed to practice or play with the Badgers, and that more tests would be run. Those tests revealed that his EKG — a measure of the electrical signals from the heart — was altered by the effusion, but not as drastically as once thought.

An issue doctors encountered was that Njongmeta never had his heart scanned in these manners, so they didn’t know if the effusion was natural or a symptom of COVID.

“There’s just some naturally occurring things I already had in my heart, certain structures looked a certain way that normally you either have that because you were born like that or because of COVID,” Njongmeta said.

Doctors were able to determine the effusion wasn’t related to his COVID diagnosis and he was cleared to return to action after a seven-day acclimation period. He got back to practice with UW in early October.

That unfortunately wasn’t the end of Njongmeta’s health problems last year. He tore his groin less than a week after returning to practice, which kept him out of action until he was able to play in the Duke’s Mayo Bowl.

He’s healthy now and has been a standout in the Badgers’ spring practices, according to position coach Bob Bostad.

“He’s doing some really good things, kind of things that we saw when he was a high school player that we really, really liked,” Bostad said.

Njongmeta is just happy to be back on the field after a 2020 beset with health issues.

“I’m good now, healthy,” he said. “But boy, a situation like that really makes you grateful to be able to practice every day because you realize just how close you were to not practicing or continue playing.”