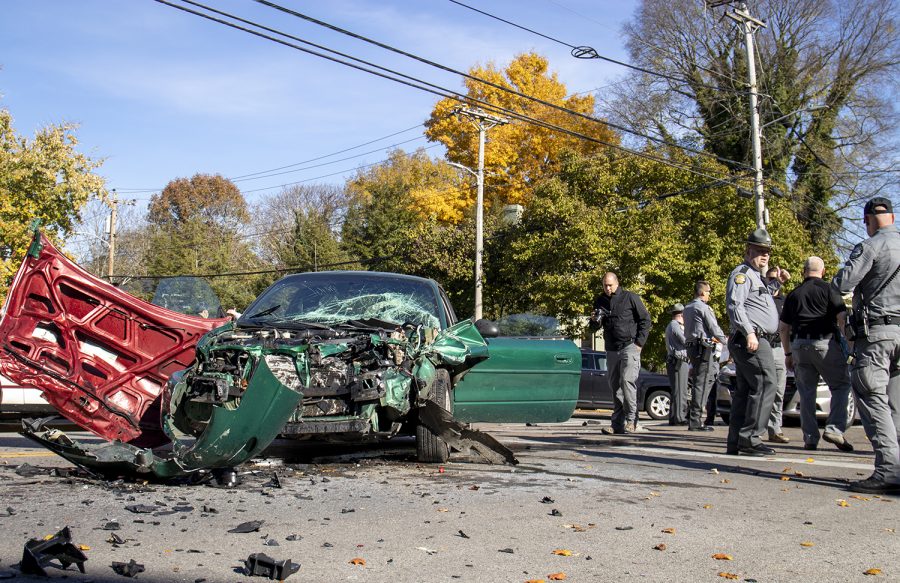 State troopers work to secure the premises after a pursued stolen vehicle wrecked at the intersection of East 13th Avenue and State Street on Nov. 9, 2021. The driver collided with two other vehicles, and the occupants of the those vehicles did not report injuries.

A high speed pursuit that began in Logan County ended at 13th and State Street in Bowling Green on Tuesday, Nov. 9 after the driver of a stolen vehicle led police on a chase that spanned three Kentucky counties and later collided with two occupied vehicles.

Mitchel Hazelett, lieutenant for the Kentucky State Police, said while he doesn’t know the top speeds of the pursuit, it was well above the posted speed limit and the only reported injury is the driver of the vehicle.

“There was a reckless driver called in Logan County, and at some point the Simpson County Sheriff’s Office observed the vehicle and got in pursuit with it,” Hazelett said.  “It came into Warren County, up Scottsville Road and then onto where it finally ended there at 13th and State.”

KSP received a request for assistance at 8:53 a.m. from the Simpson County Sheriff’s Office regarding an active vehicle pursuit, according to a news release from the agency.

The suspect was identified as Paul Edward Eden of Tennessee and is charged with attempted murder of a police officer, wanton endangerment, theft by unlawful taking (Automobile) and several other drug and traffic offenses, according to the release.

The Simpson County Sheriff ‘s Office located the subject around the Golden City area and began a pursuit shortly after that led towards Warren County, according to Hopson.

Kendall Gott, a sculpture student at WKU, has lived in Bowling Green for around six months and was woken up by the rush of activity that happened right outside of her apartment on State Street.

“I was asleep, and I heard two really loud bangs, and then ‘get on the f******g ground,’” Gott said. “I’m like, oh, I need to get out.  I look out my window and I see these two cops pointing a gun at the green car right here, and they drag this guy out of the car, and then pull them over to where I can’t see.”

Gott said the whole experience was frightening, as she was concerned about getting in the middle of gun fire, as well as the safety of onlookers who’d gathered on the street to watch the arrest.

Eden is currently being housed in the Warren County Regional Jail.