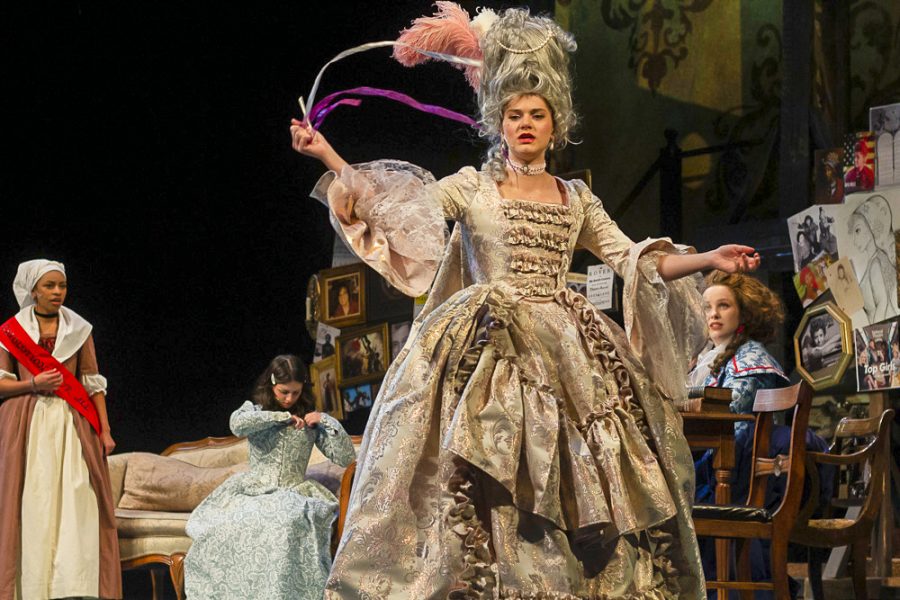 Marie Antoinette (Ella Shahn Hagan) twirls her ribbons in emphasis while pacing in Olympe de Gouges' office. She details her experience of waking up in a grand palace bedroom and finding herself falling asleep in a prison cell by nightfall– without any cake or sugar. Meanwhile, Marianne Angelle (Jorah Graham), Charlotte Corday (Katarina Johnson), and de Gouges (Elizabeth Garapic) listen intently during a technical run-through of The Revolutionists.

In the midst of bright footlights and scribbled blocking, or stage directions, four young female actors took on the challenging role of embracing heroic women from all aspects of the French Revolution in Western Kentucky University’s Department of Theatre & Dance’s rendition of “The Revolutionists” by Lauren Gunderson.

The play follows four women: Olympe De Gouges (Elizabeth Garapic), a feminist political playwright; Marianne Angelle (Jorah Graham), a fictional character portraying the women of the forgotten Haitian revolution; Charlotte Corday (Katarina Johnson), a young assassin who avenges those who were beheaded at the hands of journalist Jean-Paul Marat; and Marie Antoinette (Ella Shahn Hagan), the Queen of France during the reign of terror.

Over 72 days of  vigorous work and training, from cast list announcement to opening night, student technicians and performers worked hard to tell these women’s stories, which are often forgotten or widely fabricated to meet another’s narrative. The work done to construct a guillotine and embody the fear of losing one’s head help portray these women’s stories as vividly and accurately as possible. Emma McGee, a junior performing arts-theatre major, served as dramaturg and researched the setting, costumes, and script for historical accuracy.

“We don’t know these women because their stories aren’t told,” McGee wrote in her program note. “In ‘The Revolutionists,’ Olympe de Gouges is passionate about bringing their stories to the stage. Just like Lauren Gunderson. And just like the women who have shaped this production, both on and backstage.”