‘An art, not a science’: As WKU enrollment decreases, other state universities see increases 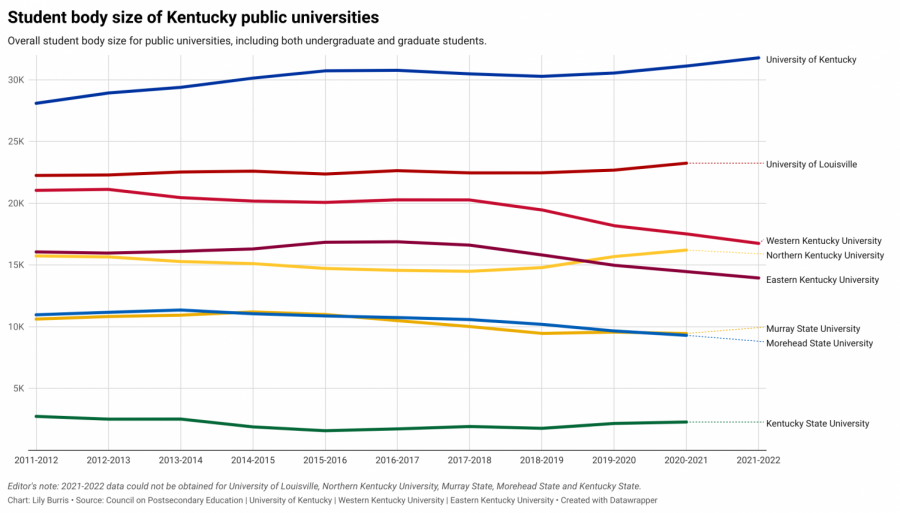 In contrast, Northern Kentucky University, the other regional university, is experiencing an upward enrollment trend.

For the 2020-2021 school year, WKU’s total enrollment was 17,518 students, according to data from the Council on Postsecondary Education. For the Fall 2021 semester, enrollment is 16,750 students, a 4% decrease from the previous year.

Ethan Logan, vice president of Enrollment and Student Experience, described 2020 as a good year for enrollment.

“There’s a lot of things that happened, I think, which contribute to that, but for the most part, it’s anecdotal,” Logan said.

In terms of participation and engagement, Logan said he thinks things are going well for WKU. He described the “funnel” when considering enrollment performance and consideration, a tool used to see how many possible students there are to how many actually attend the university. 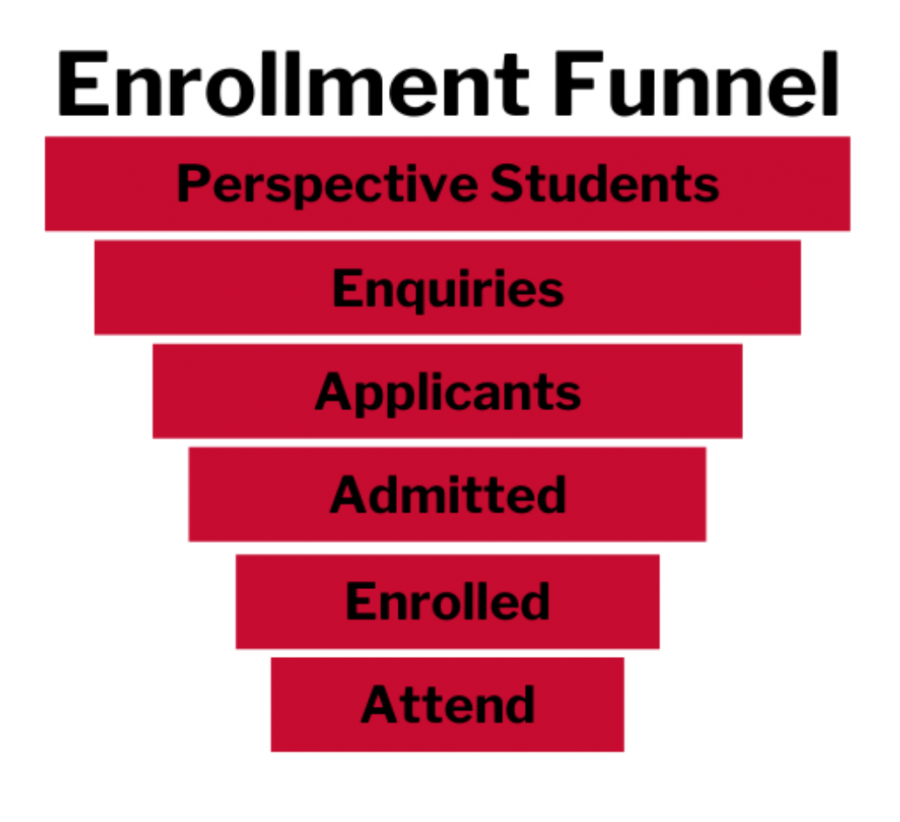 Ryan Padgett, assistant vice president for enrollment and student success at NKU, said the university saw a decrease in enrollment of new freshmen and new transfers through the pandemic, but a steady increase in graduate students.

Padgett said NKU’s graduate program makes up about 25% of the overall student body. WKU graduate students make up just under 14%, according to the Office of Institutional Research.

Padgett said the push for online learning access at NKU before the pandemic ensured that the necessary infrastructure was already in place for the sudden transition to at-home classes in 2020.

“We introduced this accelerated online approach to learning, and that took place about four or five years ago,” Padgett said. “Since then, that has grown significantly over the last few years. We’ve seen significant growth within that online learning, and I’d say that has really been a significant part of the growth that we’ve seen in our overall headcount for enrollment.”

WKU announced the Hilltopper Guarantee last year, which waives tuition for all Pell Grant recipients, and the Border State Scholarship Program, which provides in-state tuition to students from all seven of Kentucky’s border states.

“I feel like those are scholarships deferred, right now, in that we saw some lift from them, but not the lift that we anticipated,” Logan said. “In the sense that, I think there’s a lot of COVID still impacting that conversation. I think they will see that grow, for sure.”

Logan described the scholarships as a “long game” and not something that immediately “makes a splash.” He said the Hilltopper Guarantee had slightly fewer students than projected, and the Border State Scholarship Program had slightly more students.

Emma Myers, a freshman nursing major from Nashville, Tennessee, said her decision to attend WKU largely came down to the discounted tuition from the Border State Scholarship Program.

“I’m from Nashville, and most everyone goes to [University of Tennessee],” Myers said. “I almost went there, and then Western offered me a lot more money, and I get partial in-state tuition here.”

Tennessee, Indiana and Illinois
are the top three border states WKU receives students from. Logan believes that before he came here, WKU was focusing on metropolitan areas in border states, but the new scholarship provides further reach into more rural areas.

While WKU, EKU and NKU are regional universities with comparable enrollment, UK and the University of Louisville are not. UK is the state’s flagship university, and UofL is a research university.

UK grew by roughly 4,000 students in the last 10 years, the highest increase of any public university in the state. The total enrollment from 2011-2012 was 28,094. There was a brief decrease in total enrollment at UK from 2016-2017 to 2018-2019. The student population this semester reached a record high of almost 31,800, according to preliminary reports from the university.

Jay Blanton, chief communications officer for UK, said intentional planning on the part of UK President Eli Capilouto and his administration were major factors in class growth over the last decade.

“There’s a lot of institutions across the country that have dropped significantly, and we’ve not done that,” Blanton said. “We’ve been able to basically be flat or grow overall enrollment, and we think we’re well-positioned now. And as we come out of COVID, we hope to grow again in a smart way.”

“What we found is that with as little as $5,000 in unmet need or debt, a student was much less likely to be retained and ultimately graduate,” Blanton said. “[Since implementing LEADS] you’ve seen our retention rates go up to historic highs, and then when retention rates go up, graduation rates tend to follow.”

“I started looking at the actual cost, and [UK] is well over double the cost to go to Western,” DeRossett said. “Eventually I narrowed it down between here and Murray, just based on cost, which was very similar.”

His final decision came down to the level of engagement that WKU offers potential students, including setting up orientation and responding to his emails.

“When it came down to actually talking to them, getting information together and understanding what I want to do, Western ended up being a lot more responsive, and that’s ultimately what made me stick with Western,” DeRossett said. “You’ve got a big school with a small school experience, it’s not very expensive, and they’re actually willing to work with you and give you money to come here.”

A wide range of factors go into a student’s choice of college, but Blanton said students regularly tell him their highest priority is finding a job quickly after they graduate.

“Students are going to change careers a lot, particularly early in their adult lives, but they want to know that they have the skill sets, that they’re getting prepared to be really successful when they leave,” Blanton said.

UK also encourages students to study across different disciplines, which Blanton said makes them much more competitive in the job market after graduation.

“What employers actually tell us is that, in many fields, they want students who have quantitative skills, or critical thinking skills, or [STEM experience],” Blanton said. “But they also tell us they want potential employees who have really good communication and presentation skills, and who can work in teams, who can think critically and analyze complicated topics, not just quantitative ones, but text and narrative that may contain complicated proposals and ideas.”

Mya Rashada, a senior architectural science major from Nashville, Tennessee, said the interdisciplinary approach to her program was prominent in her decision to stay at WKU.

“Other schools that focus on architecture usually only do the design part, but here we learn the construction part too, so it’s like we get two different educations at once,” Rashada said. “[Future employers] wouldn’t have to hire another person to go over my initial drawings because I know how to do it.”

Rashada said finding a job after graduation might be difficult as her program isn’t accredited, but she’s not worried.

COVID-19 has posed significant problems for recruitment and finances for all institutions, but Blanton said UK has navigated the pandemic to the best of its abilities.

“What we’ve tried to do is work together as a community, our faculty, our staff, and our students, to keep people safe, healthy, keep them well,” Blanton said. “But also, keep positioned so that we can grow again and continue to prepare students, and I think our community is really rallied around that idea.”

It decreased the following year and then increased until the 2020-2021 school year, reaching 2,290. The Herald was not able to obtain data for the school’s Fall 2021 enrollment.

Logan said WKU wants to be effective and purposeful in using its enrollment and recruitment data because there’s an infinite list of reasons why a student may or may not come to the Hill. Some predictable examples he provided were cost, alumni parents and distance.

There was one big factor in Logan’s mind on what made things different.

Other examples that Logan provided as things outside of what WKU can control included relationships, feelings on the color red and whether or not a student likes the feel of terry cloth towels.

“Enrollment management is an art, not a science, and there’s a lot of value in that,” Logan said. “We put a lot of effort and a lot of focus on data, data acquisition and analysis.”