OPINION: Way too early predictions for the 2022 Kentucky Senatorial race 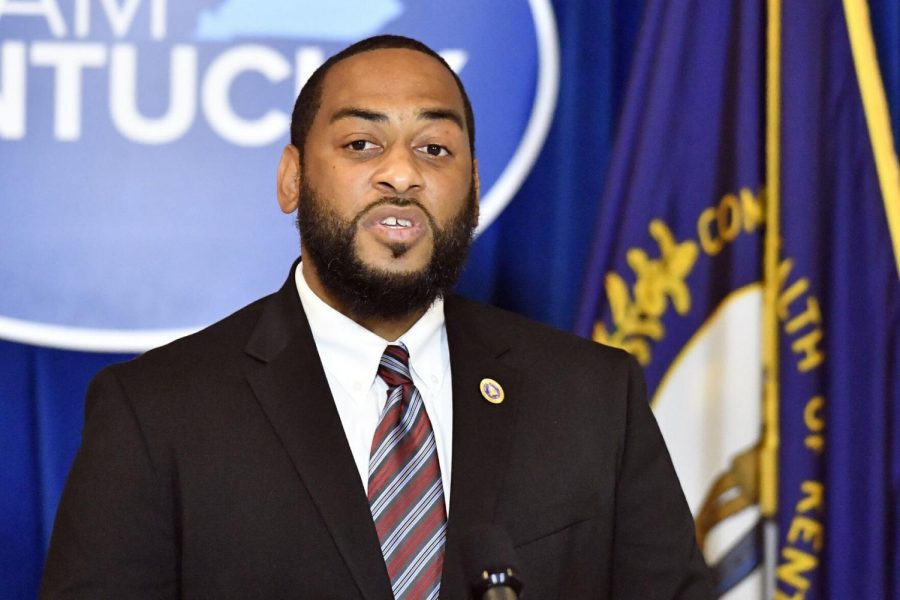 In this Sept. 23, 2020 file photo, Kentucky State Rep. Charles Booker addresses the media following the return of a grand jury investigation into the death of Breonna Taylor at the Kentucky State Capitol in Frankfort, Ky. Booker, who nearly pulled off an upset in last year's Senate primary, said he's “strongly considering” another run for the Senate against Republican Rand Paul.

For as long as I can remember, I’ve always found politics fascinating. As I’ve grown older, I’ve taken in as much information as I can. While I would never claim to know everything about Kentucky and American politics, I would say that I have a good understanding.

I joke with everyone and tell them that election days are my Super Bowls. I love watching the returns and seeing how races are going to play out. I’m a nerd, I know.

This year’s midterm elections are extra-special for me–it’s the first time I’m going to be able to vote. I always pay close attention to the races, but this year, I’ll be watching them even closer.

In 2022, one of Kentucky’s Senate seats is up for reelection. Republican Rand Paul has held the seat since 2010. He won his second term in 2016, defeating Jim Gray, former Mayor of Lexington and current Kentucky Secretary of Transportation.

Paul’s biggest challenger will be Democrat and former Kentucky State Representative Charles Booker. You should recognize that name–Booker ran against Amy McGrath in the 2020 Democratic Primary to challenge Mitch McConnell. It was a close race, too. McGrath won with 45.4% of the vote to Booker’s 42.6%. Booker built name recognition and momentum that cemented him as the early frontrunner in the Democratic Primary, but can he defeat Paul in a head-to-head matchup?
What does Rand Paul need to do to win?
To put it bluntly, nothing. Kentucky has been a red state since before I was born. The last Democratic Senator was Wendell Ford, who held the seat eventually filled by Paul until he retired in 1999. Mitch McConnell has held office since winning the election in 1984, defeating the Democratic incumbent Walter Dee Huddleston. The state of Kentucky has also been awarded to the Republican candidate for President in every election since 2000. Outside of Louisville and Lexington, every county tends to lean Republican.

The election of Donald Trump changed American politics for the foreseeable future. Trump’s grasp and influence on the Republican Party has been seen in the year since he left office. As president, the Republican Party shifted from a more moderate base to one farther to the right.

Trump created a party that appeals to working-class America’s hopes and fears. The independence and freedom from government involvement in their lives, not paying more taxes and the playing to religious beliefs. The fear that jobs will be lost overseas and the belief that the Democratic Party is not willing to work for them. These beliefs are what the modern Republican Party uses to mobilize their base, which today consists of those that may not have voted before Trump because they didn’t feel represented.

Throughout Trump’s presidency, Rand Paul became one of the President’s most vocal supporters. This support has only wavered once or twice, and not enough to prevent Trump from endorsing senator Paul. Paul received the former President’s endorsement, which stated that Paul “fights against the Swamp in Washington, the Radical Left Liberals, and especially the destructive RINOs [Republicans in Name Only], of which there are far too many, in Congress.”

The statement painted Paul as a loyal Trump supporter in a loyal Trump-supporting state. This is all Paul needs to win.
What does Charles Booker need to do to win?
Booker has a steep uphill battle. Trump’s makeover of the Republican Party has mobilized farther-right voters, pushing Kentucky deeper in the red. In 2020, Booker ran as a farther left candidate than Amy McGrath. Put simply, these two things do not mix.

On his website, Booker proposes a “Kentucky New Deal” that will be the largest investment in the people of Kentucky that we’ve ever seen. Ending poverty, delivering quality healthcare to everyone in our Commonwealth, and fixing our crumbling infrastructure.”

These ideals are some that fundamentally contradict the beliefs of the majority of Kentuckians. The idea may make sense, but the required tax increases will dissuade voters. While Booker believes in a wealth tax to prevent tax increases for the middle class, this will be largely ignored or debated against by Republicans.

In order to win, Booker must move closer to the center without giving up the core beliefs in his plans. It’s a tough line. Moving away from the left alienates those that truly believe Booker will bring meaningful change and be a different kind of senator and politician.

Staying farther left alienates not only the members of the Democratic Party that are on the verge of voting for a moderate Republican, but also the moderate Republicans who do not feel comfortable voting for Paul. Adopting moderate policies will appeal to voters in rural areas that don’t agree with Senator Paul, Trump, or the base of the Republican Party.

I do believe that Booker has a path, however narrow and steep it may be. During the summer of 2020, Booker was an active voice supporting the family of Breonna Taylor and the Black Lives Matter movement. He spoke at the March on Washington, calling for unity and justice. He marched in Louisville with protestors.

This hands-on activism not only gave Booker name recognition but is bound to win him support from most Kentucky Democrats. His actions will mobilize support from the African-American community. He will draw on his service and record to show how he has worked for the people of Kentucky. When support like this grows, it can be difficult to stop.

This mobilization in the midterms could give Booker the push he needs to defeat Paul. Midterm election voter turnouts tend to be much lower than presidential election years. If Booker is able to gain large amounts of support from those who do not usually vote in non-presidential years, victory could be in reach.
My way too early prediction
This race will be a close one. In 2020, Senator McConnell won with 57.8% of the vote to McGrath’s 38.2%. McConnell won fewer votes than Donald Trump in 2020, with McGrath winning more than Joe Biden. This shows that a moderate Democrat can pull voters from a Republican in a majority Republican state.

Booker will have a tough time doing the same. The strong support Rand Paul has from the Republican base will be hard to beat. Booker will have to make concessions in order to reach more Kentuckians. He must stand strong in his beliefs yet compromise where necessary. Where Paul only has to run as a supporter of Donald Trump, Booker must run as a moderate willing to bring change.

President Biden does not have much support in Kentucky, meaning that the Democratic party doesn’t either. Booker also doesn’t have the name recognition that twelve years in the Senate, a prominent Republican father and support from the former president–possible 2024 Republican nominee–will give one in the Commonwealth of Kentucky.

Charles Booker will gain large support, but Rand Paul has a consistent base that will stick with him because he sticks with Donald Trump. Where Rand Paul can be a stereotypical 2021 Republican, Booker cannot be a stereotypical 2021 Democrat. If Booker is to have a chance, he must remember that he’s running in Kentucky for all Kentuckians, many of whom don’t agree with him.

My way too early prediction? Rand Paul will win, but not without a fight from Charles Booker.