‘A pillar of the WKU community’: A WKU alumna starts fundraiser for local liquor store demolished during tornados 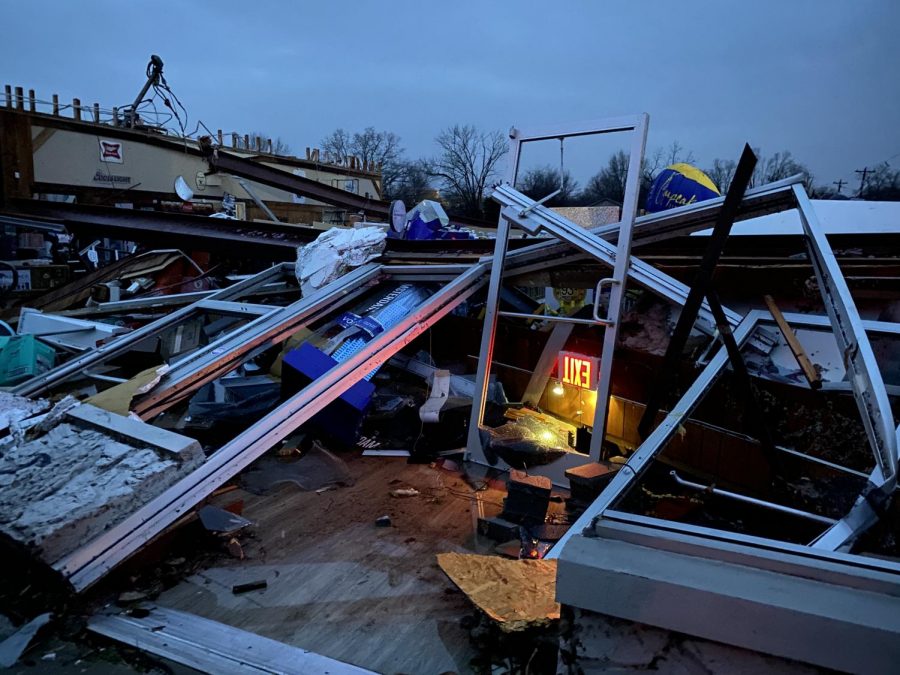 The remains of WK Liquors on the morning of Dec. 11. Manoj was already on the scene saving what he could.

Anyone who has wandered into WK Liquors has been greeted by Manoj, the friendly face behind the register. The well-known liquor store located on the 31W Bypass near WKU’s campus was reduced to rubble during the storms on Dec. 11.

A WKU alumna, Natalie Kelley, started a GoFundMe for the business that has surpassed its $10,000 goal in one day. Currently, Kelley has raised $11,920. She plans to deliver the donations to Manoj in person once the fundraiser closes.

In the fundraiser description, Kelly wrote, “He is a pillar of the WKU community, and he is one of the most caring and generous people that I have ever encountered.”

Proving Kelly’s point, dozens of people visited the remains of the structure over the weekend to help salvage whatever was left intact. Volunteers dug out hundreds of bottles and cans from the wreckage to be stored for when Manoj’s business is back on its feet.

“When I was attending WKU, they took the time to learn my name and details about me,” Kelley said. “Every time I came into their business, Manoj would ask me about things we had talked about previously, remembering even the smallest details.”

Since Kelley has graduated from WKU, each time she visits Bowling Green, she makes sure to visit Manoj at WK Liquors.

“When I saw the photos of the damage that had been done to WK Liquors, my heart broke for Manoj and Kalyani,” Kelley said. “I knew that the rest of the WKU community was sharing in my sadness as they are truly friends to all of us. I just wanted to do my small part in providing whatever relief to their family that I could, seeing as they have given so much love to our community over the years.”

The goal is to help Manoj’s family in whatever way possible, Kelley said. She intends to keep the fundraiser going for as long as donations are being received.

“Following such devastation and with the holidays right around the corner, my only goal is to make them feel as loved as they have made all of us feel” Kelley said. “I have been so amazed at the outpouring of support, which seems to be unending.”

While the Bowling Green community has a deep love for Manoj, Kelly said she wasn’t sure she had a big enough network to raise money. The city came through.