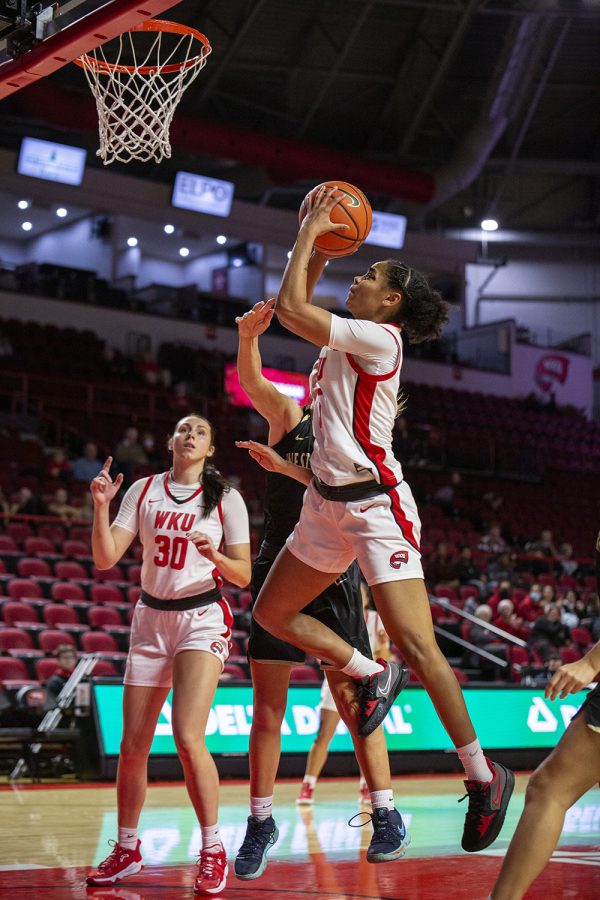 The Lady Toppers were shorthanded as sophomores Hope Sivori, Selma Kulo and Teresa Faustino didn’t make the trip to Miami due to COVID-19 protocols. All three average over 10 minutes played per game.

“I’m  proud of them and shoutout to the young ladies that are back home,” WKU head coach Greg Collins said. “We can’t wait to get back and get you back on the court because this is the team and we always talk about it. It doesn’t matter who steps up, just somebody going to step up. That’s what makes us strong.”

“We’re not the most efficient team, I told them after the game,” Collins continued. “We’re not always the most efficient, we turn the ball over too much, we make some bad decisions and miss some easy layups, but we’re probably the grittiest, gutsiest, maybe the biggest hearts of anybody that we play. We just keep on trying to find a way to win. We keep on believing in each other and believing what we’re doing and we [can] overcome our shortcomings right now.”

WKU overcame 26 turnovers by shooting 51.2% from the field and 14-of-17 from the charity stripe while holding FIU to 34% total shooting. The Lady Toppers also outrebounded the Panthers 32-22 while leading the game from start to finish.

“It felt pretty good,” Meredith said. “We were down three players, so we had to stay in the game, keep going, keep that momentum up. That was the main thing today, just keeping the momentum even when we got down, just keeping that energy.”

FIU graduate forward Ariel Colon led FIU with 15 points, shooting 6-of-7 from the charity stripe. She was the only Panther to score in double-digits while coming away with four rebounds.

WKU won the tip and freshman guard Macey Blevins drained a three to open up the game. Both teams went back-and-forth before turnovers and bad shots slowed the game down. Abdelgawad hit a layup to end a two-minute scoring drought for both teams.

The Lady Toppers shot 63.6% from the field in the first quarter while the Panthers shot a measly 22.2%, but turnovers were the story early on as both teams combined for 11 turnovers in the opening period. WKU led 15-7 at the end of the first frame and FIU failed to hit a shot for the last five minutes of the quarter.

Freshman guard Jenna Walker hit a layup on WKU’s opening possession of the second quarter, giving the Lady Toppers a 17-7 lead. Walker ended the game with a career-high nine points. FIU senior Raquel Ferrer-Bernad hit a three, sparking a quick 8-0 run in just 1:11 of play. The Panthers answered every blow the Lady Toppers gave them.

FIU made more field goals in the second quarter than points they scored in the first quarter. WKU’s turnover woes continued, turning the ball over nine times. Even while they struggled to take care of the ball, the Lady Toppers led the entire first half and took a 31-27 lead into the break.

“We were really trying to focus on when you’re on the road, you have to play solid defense.” Collins said. “We held them to 31 [points] outside of that second quarter. The second quarter we had some breakdowns, we let some three-pointers get free. Then we fouled them a whole lot in that second quarter and they got 20 points, but anytime you can hold the team close to 50 points, that’s pretty good, especially on the road.”

Both teams started the second half slow, not scoring for the first two minutes before freshman guard Alexis Mead opened the scoring. FIU wouldn’t make a basket until the 5:32 mark of the third quarter during a 9-2 run by WKU that opened up its lead to 40-29.

The Lady Toppers went on a scoring drought for over four minutes, allowing the Panthers to crawl back into the game with an 8-0 run. Abdelgawad ended the run and drought with an and-one with 11 seconds left in the third quarter to give WKU a 43-37 lead heading into the fourth.

Both teams struggled early on in the fourth quarter, making just three shots combined in the first four minutes of play. Two of those shots were threes that came from Meredith. Meredith scored the first eight points of the quarter for the Lady Toppers before they went on another scoring drought for almost three minutes of play.

The drought allowed the Panthers to get within four points with three minutes left in the game. After a Macey Blevins make, Abdelgawad scored the next six points for the Lady Toppers to keep the Panthers at arms’ reach.

Walker and Blevins iced the game with two free throws each as WKU won its fifth consecutive game 63-51.

Up next, WKU will continue its three-game road stretch against the Rice Owls on Jan. 13 at 7 p.m. CT.