WKU’s dominant second half leads to win over Rice 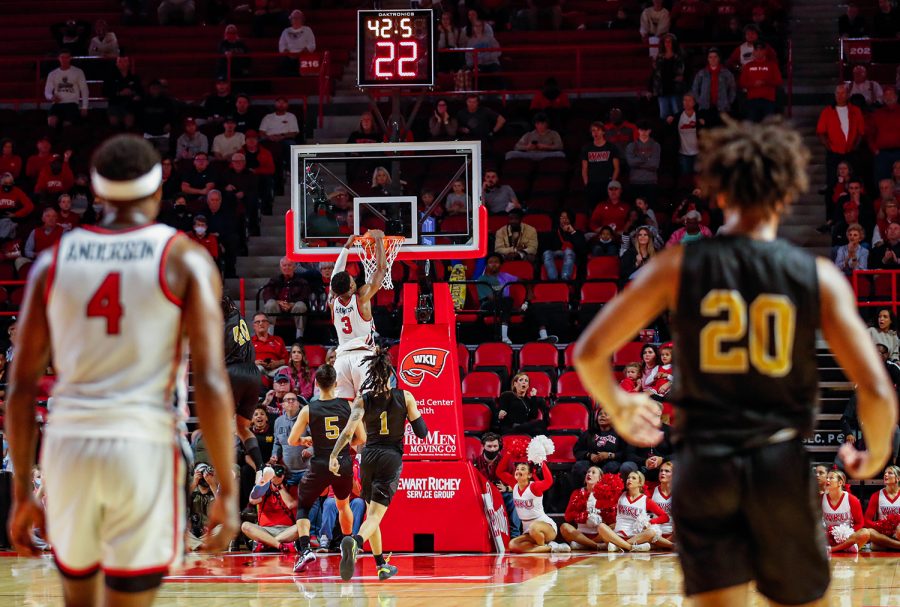 WKU senior forward Jairus Hamilton dunks the basketball with 42.5 seconds left in their game against the Alabama State University Hornets in Diddle Arena on Nov. 9, 2021.

“They’re a really good basketball team,” WKU head coach Rick Stansbury said. “We knew coming in this thing they’re hard to defend. They got a bunch of shooters out there. Like I said, there’s nobody in the league that had one player that’s made 40-plus threes, they have two of them in that lineup. They’re really difficult to guard with all that movement.”

“We have great players,” Anderson said. “I feel like a lot of guys can go and just have this overnight, a big night, even guys coming off the bench. I feel like when we’re just locked in we’re a dangerous team.”

It was a tale of two halves as Rice looked to have the advantage early. The Owls are known for shooting a lot of threes, and they carried out that reputation to begin the night. Four of their first seven makes were behind the three-point line with all of them coming off assists that broke down the Hilltoppers 2-3 zone.

WKU transitioned to playing man defense but it didn’t make a difference early. Rice had almost as many three pointers made as the Hilltoppers had total field goals made halfway through the first half.

Rice had the lead for all of 22 seconds in the first half due to matching the physicality of WKU on the boards and taking advantage of the open shots they were getting from breaking down the defense.

Although the Hilltoppers struggled in shooting the ball in the first half, they kept the game within arms reach at the free throw line. WKU shot 10-of-13 from the charity stripe in the first half while Rice only got to the line once.

The Hilltoppers climbed back into the game as the tempo picked up, coming off of back-to-back dunks from Anderson and Sharp. WKU went on a run the last couple minutes and hit their last four shots to bring the deficit to one possession, 42-40, going into halftime.

“I think we do a really good job of adjusting throughout the game,” Hamilton said. “Sometimes things will just go the other team’s way, but we’ll find a way to correct everything and do a good job of just fixing everything. I think that we are just really finding our groove, really understanding how we can play team defense together and I think we’re doing a better job of that as the season has gone on.”

WKU kept that momentum going in the second half. The team used a fast tempo offense that opened up lanes, allowing Sharp to make an impact on both sides of the ball with three easy baskets, forcing Rice to call an early timeout.

As the Hilltopper offense rose to occasion, the defensive effort fed off of that energy. Halfway through the second half, The Owls only had 12 points with six fouls and five turnovers on 4-of-12 shooting and 1-of-5 from behind the arc.

“We just really had to get more engaged,” Hamilton said. “They came out with a lot of energy, a lot of pep. We came out, we played good defense, but they were hitting some tough shots. We just had to really figure out how to stop them from hitting them tough shots, and I think we did a really good job of that.”

McKnight’s ball handling and playmaking allowed Hamilton, Camron Justice and Sharp to light up the scoreboard and completely take over the game.

WKU’s hot shooting was too much to overcome as they took the double digit win.

The Hilltoppers outscored the Owls 40-24 in the second half as Rice was held to 29% shooting. WKU created 11 turnovers with 10 points off of those turnovers. The Hilltoppers doubled the amount of free throws taken, going 17-of-22 from the line while the Owls went 8-of-11. Rice hit seven three-point shots in the first half but only hit one in the second.

The Hilltoppers will conclude the three-game homestand against North Texas. The last time these two programs met was in the C-USA Championship last season where the Mean Green won the conference title 61-57 in an overtime thriller. Tip-off for the Saturday afternoon rematch is set for 3 p.m. CT.