The Lady Toppers stay hot after a dominant defensive performance 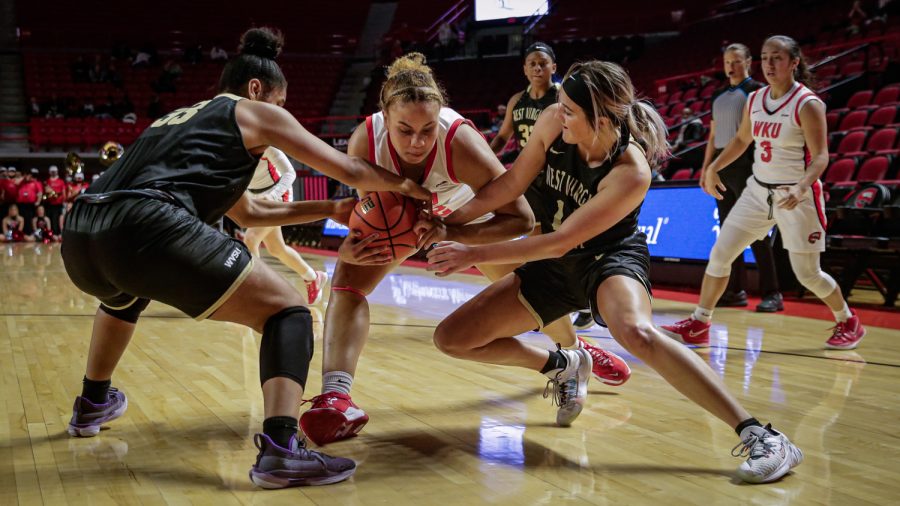 WKU head coach Greg Collins said he did not believe his team played their best basketball against North Texas but was still extremely proud of their defensive effort the entire game.

“I couldn’t be more proud of this bunch,” Collins said. “They work so hard and they really play hard together and they cheer for each other. It’s a huge win no doubt. We didn’t play perfectly, but we played well enough to win. I felt like we were in control of the game, the entire game.”

The WKU offense was incredible all afternoon. The Lady Toppers and the Mean Green both scored 24 points in the paint, but the difference in the game was shooting from outside of it. WKU shot 21-of-48 (58%) from the field and 7-of-13 (54%) from behind the three-point line and was also explosive in transition, scoring 17 fast break points.

The Lady Toppers did a good job taking care of the ball, losing just 18 turnovers and forcing 29 Mean Green turnovers. North Texas destroyed WKU on the boards 38-19, but it was not enough to propel the Mean Green against the number one team in Conference USA.

“The girls did a really good job on defense, and you have a team with five seniors and three juniors in North Texas,” Collins said. “They are well coached, well prepared and experienced, and we got 21 steals. We forced them into 29 turnovers and that’s not bad for a group of mostly freshmen.”

Senior forward Meral Abdelgawad and freshman guard Macey Blevins were the Lady Toppers’ standout performers of the game. Abdelgawad scored 18 points and grabbed two rebounds. This was her first time scoring under 20 points in the last seven games. Blevins scored 11 points and shot 3-of-4 from the three-point line.

“We have a lot of heart,” Blevins said. “Everybody sees us as a really young team. We start four freshmen so everybody’s kind of going to come into the game thinking they’re young. As far as we’re concerned, we play very mature for our age, I think. Then you have Meral, who’s a senior, she’s a great leader, [and] she steps up when we need a big moment.”

WKU won the first quarter 20-13. Abdelgawad and  Freshmen Alexis Mead and Mya Meredith scored 17 of WKU’s first quarter points. The three Lady Toppers seemed virtually unstoppable early on. WKU lost the rebound battle in the quarter seven to five but were able to run in transition to get easy baskets. The Lady Toppers had seven fast break points going into the second frame.

WKU was sensational on both ends of the floor in the first half. The Lady Toppers had 12 steals in the first half and shot 5-of-8 (63%) from the three-point line. Abdelgawad had a game-high 11 points at halftime and Blevins hit two big three-pointers in the second quarter that gave WKU a 12-point lead. WKU led North Texas 35-27 at the intermission.

The Mean Green defense came to life in the third quarter, holding the Lady Topper offense to only nine points. The Lady Toppers opened the fourth quarter on a 9-0 run with back-to-back steals and easy layups. Their defense was smothering all night, but they were outstanding defensively in the final quarter.

“We’ve grown beyond an average point and that’s what we really try to hang our hat on, who we are and where we are, and not worry about what polls or outside people might say,” Collins said. “We’re just focused on being the best that we can be.”

WKU looks to extend its winning streak to eight games next Thursday at Diddle Arena against the Florida Atlantic Owls at 11 a.m CT.

“We’re just kind of keeping tunnel vision on the next game,” Blevins said. “[We’re] not looking too far ahead. We can’t think about the past anymore. We got some good wins but that doesn’t mean anything for the next game coming. So whoever’s next, we’re just trying to focus on them right now.”