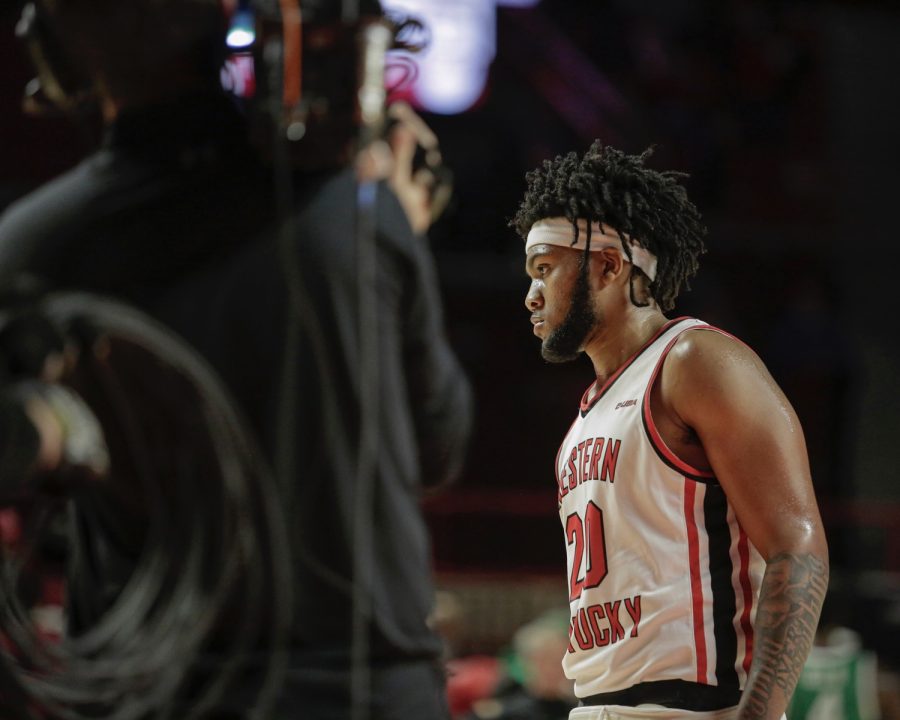 WKU Hilltoppers’ sophomore guard Dayvion McKnight (20) stands on the court after the match against the North Texas Mean Green on the afternoon of Saturday, Jan. 15 2022, in Diddle Arena. North Texas won the match 65-60.

This is the first time these two teams have seen each other since last year’s thriller of a championship game, which ended in North Texas getting the bid to the NCAA Tournament. The result stayed the same in this one as well.

“We can talk about a lot of different things but you can start with one stat, they made a lot of big timely threes,” WKU head coach Rick Stansbury said. “They made 10, which is almost half of their points…10 threes to basically none for us.”

The Mean Green came in looking to establish their play from behind the arc on both sides of the ball while the Hilltoppers looked to work in the paint. North Texas hit four of their first six three-pointers while holding WKU to just one attempt, but Sharp established himself at the rim, scoring eight of WKU’s first 14 points in seven minutes.

The Mean Green came in with the number one defense in the league, and they made the Hilltoppers earn every bucket they made. Both teams’ areas of expertise stuck out; North Texas’s three-point defense and WKU’s ability to get to the free throw line.

“They were hitting threes,” McKnight said. “We couldn’t hit threes tonight so I think that was the biggest [thing] separating between us and them tonight.”

WKU kept it within reach by going 6-of-8 from the free throw line but were trading the threes UNT were making with midrange two pointers. The Mean Green outscored the Hilltoppers 12-6 in the last five minutes including a buzzer beater from behind the arc from junior guard Tylor Perry to end the half making it 37-30 in their favor.

The second half got off to a slow start for both teams with a combined seven fouls called in the first four minutes. WKU buckled down on defense, holding North Texas to 2-of-8 from the field with six turnovers with 12 minutes left. The Hilltoppers had trouble converting on the other side, missing free throws and good looks from behind the arc.

McKnight is what kept WKU in this game in all phases. Through the first 12 minutes of the second half, McKnight had eight of the Hilltoppers’ 12 points while the Mean Green had 16 total.

The combination of the suffocating defense of North Texas and the missed opportunities at the free throw line and from behind the three-point line was just too much for WKU to overcome.

“I did a poor job of changing tempo tonight with them,” Stansbury said. “Unfortunately, that’s not kind of who we are this year with this team. We’re not really put together great to change tempo out there by pressing a lot with some of our guys. We’ve kind of been, because of [Jamarion], a guy that’s protected the basket, hides some things [that] maybe we’re not as good at defensively by playing a lot of zone.”

Graduate guard Camron Justice hit WKU’s first three pointer with 3:10 left to keep the streak of 1,086 games with a three pointer made alive, the fourth longest streak in the country.

The Hilltoppers tried to make some noise, bringing the deficit down to six with two minutes left, but couldn’t overcome it.

WKU finished the game with a higher shooting percentage but finished -24 in three-point shooting, going 2-of-12 for the game. North Texas’ bench proved to make a difference, outscoring WKU 21-2. UNT finished with nine steals and caused 15 turnovers leading to 13 points.

WKU will now go on the road for its annual Florida road trip, starting with Florida Atlantic. That matchup in Boca Raton will be on Thursday evening at 6 p.m. CT. The game will be broadcast on the CBS Sports Network.