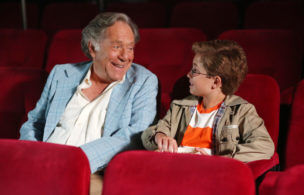 The actor who portrayed Pops for eight seasons died on March 23 due to complications from bypass surgery. In the show’s April 7 episode, “Couple Off,” Segal made his final appearance in the role, and the series made sure to honor his memory with a sweet post-show compilation. See AlsoTributes Pour in for ‘Goldbergs’ Star George Segal After His Death at 87
‘The Goldbergs’ star, a comedic and dramatic actor nominated for an Oscar, had recently undergone heart bypass surgery.

In the 45-second clip, ABC and Sony Pictures Television pulled together different moments throughout Segal’s run on the comedy, highlighting some of the more meaningful scenes he shared with his costars. The segment is “Dedicated to our friend, George.” Relive the heartwarming hilarity of this quirky on-screen patriarch in the moving dedication, which includes some sage advice like, “If you just believe in yourself like I do, you can’t lose.” Look back on a young and impressionable Adam (Sean Giambrone), who has always idolized his Pops. And don’t miss the sweet hugs Segal shares with his costars.

The video tribute concludes with a simple, “We will miss you, George.” Watch the sentimental montage for yourself below.