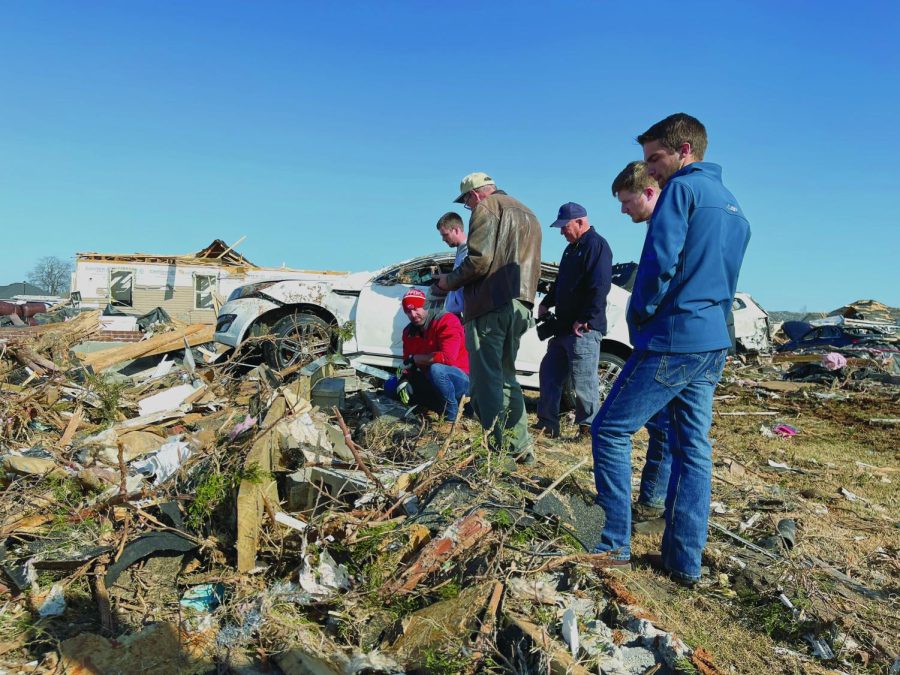 WKU’s meteorology department was wide awake in the early morning hours of Dec. 11, updating the WKU community in the time leading up to the tornadoes that tore through Bowling Green.

“We were well aware that there was a prominent severe weather threat and that a tornado threat was certainly on the table,” Joshua Durkee, WKU’s university meteorologist, said. “Trying to make an application as to whether or not a tornado is going to hit your town, that’s pretty much impossible, but the general outlook was ‘yes.’”

The system moved through town Friday night of finals week after many students had already left campus. The program did its best to warn those who were still there.

“We were already paying attention to the storm [Friday night], we were tracking the storm and warning people since it was finals week and people were still down here,” Dustin Knight, a meteorology major, said.

Once the storm touched down and left its path of destruction, those inside the program knew there was work to be done.

“We knew we were going to do something [the next day],” Knight said.

John Gordon, the meteorologist in charge at the National Weather Service of Louisville, reached out to Durkee to see if students wanted to help with the official tornado survey, which measures the strength of a tornado based on debris patterns and damage.

The group, led by Gordon, began searching for signs of major damage, such as homes destroyed to their foundations, large trees that had been twisted and mangled and pieces of debris that had been tossed through strong materials.

“[Gordon] was looking for specific things that were out of place,” Bret Garlitz, a junior in the meteorology program, said. In one case, the group came across a decorative boulder that had been tipped over and moved several feet.

“So then [Gordon] takes pictures of that, makes a note of it and plugs it into an app, which then generates a value of how much wind was needed to do that.”

Garlitz said the group found a wooden plank that penetrated a car tire, leading them to suspect a rating of at least EF2.

According to Knight, by examining the ways in which the storm affected various structures, the information from the survey can be put to use when rebuilding to ensure homes and businesses will be able to withstand severe weather in the future.

Knight knows that the opportunity came due to a terrible crisis, but takes comfort knowing this data is crucial to helping those down the road.

The event, while tragic in nature, gave meteorology students experiences they would never have had access to otherwise. Durkee was glad his students were able to participate in such a hands-on way.

“The philosophy of our program, which is the mantra of the university, is applied learning,” Durkee said. “Everything I do with my students is an attempt to offer them those types of experiences.”

As local and national news outlets spotlighted the survey team, Durkee was proud of the work his students put in throughout the process and the way his students represented WKU and the meteorology program.

“As a parent, at home, my job is very parental,” Durkee said. “You’re trying to shape these young adults in the waking moments of their future, and to see them step to the line and pull it together is impressive. It’s endearing and it’s everything that I could hope for. [I’m] always proud of these students.”

Durkee is aware that the work was optional; students could have begun their breaks or traveled home to see family. He is grateful for those that volunteered their time and effort.

“They didn’t have to do any of this stuff,” Durkee said. “A lot of these people, and rightfully so, they went home for break and whatnot, and you had a handful that were able to stick around, get up early and stay late, eat weird meals and do it all for free, just to learn. As a professor, I can’t ask for anything better. These students are wonderful.”