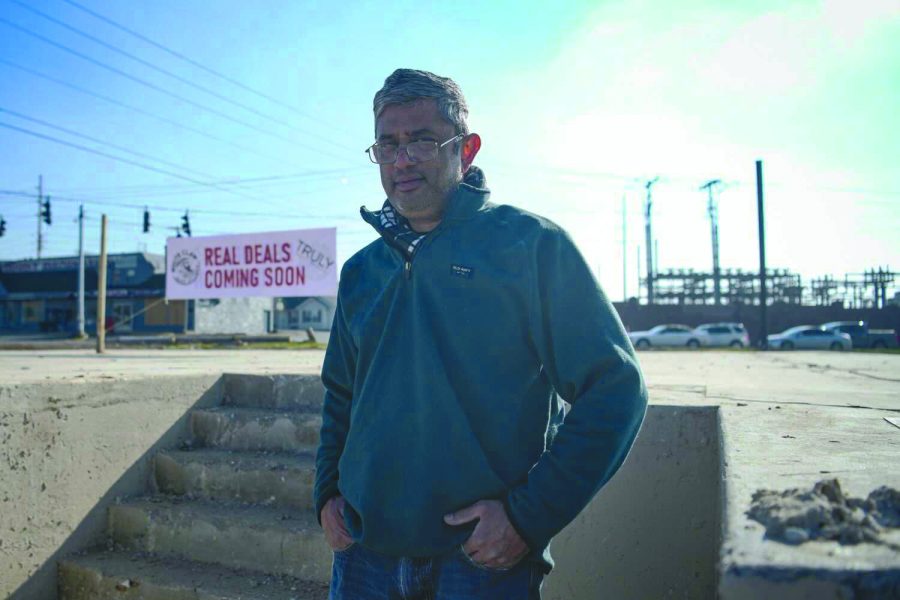 On the afternoon of Friday, Jan.14, Manojkumar Patel stands on the leveled ground where his store, WK Liquors, was destroyed by a tornado that damaged many buildings along the US 31W Bypass in Bowling Green. (Photo by Arthur Trickett-Wile)

After tornadoes traveled through Bowling Green and down the US 31W Bypass on Dec. 11, almost the entirety of WK Liquors was gone. Unlike any liquor store in Bowling Green, WK Liquors had photos of WKU students on the walls and the owner’s friendly face behind the register.

Manojkumar Patel, the owner of WK Liquors, opened the store in 2019. He received a photo of the store at 3:13 a.m. Dec. 11 from one of his salesmen showing the rubble of the store.

“It came as a total shock,” Patel said. “It was kind of difficult to accept that everything is gone.”

WKU alumna Natalie Kelley describes Patel as “a pillar of the community.” Kelley started a GoFundMe for Patel after hearing about the destruction of the store.

“I did this for Manoj because of the kindness he has shown me and everyone that has come into contact with him since he opened the store,” Kelley said. “Every time I have visited the store, he has made sure to ask me how I am and questions about whatever we have talked about previously. I just wanted to return the kindness he has shown to me and countless others in his time of need.”

Patel said he is grateful for the community efforts and that Kelley’s work shows “goodwill through and through.”

“Manoj couldn’t say ‘thank you’ enough for all the support and donations he received from everyone in the WKU and Bowling Green community,” Kelley said.

Kelley said Patel described the support he received as being part of a bigger family.

“Based on the fact that we have such a healthy community spirit, you have a sense of well-being,” Patel said. “You basically want to step up to the plate and overcome this adversity and actually move on.”

From homecoming queens to Greek council and WKU students stopping in on their 21st birthdays, WK Liquors had many photos of students.

“[The photos] started off very, very slowly because it’s having to gain the trust of the community that you’re actually serving,” Patel said. “It comes with a lot of patience.”

Even after the tornado, Patel was able to salvage many of the photos that were gifted to him by WKU students.

“The photos are still going to go up on the wall because it is just going to be remembered as part of the tornado,” he said. “How can I delete memorabilia that has impacted me personally? So I went back and made sure I tried to get back as much as I could.”

Another piece of “memorabilia” that Patel salvaged from the tornado was a mirror gifted to him by WKU students.

“When I opened the store, there was a group of I think four or five young ladies that came and saw that the bathroom didn’t have a mirror and they all signed their names on the back of the mirror,” Patel said.

While this was a tremendous loss for Patel, he remains positive through the support from his community and plans to reopen eventually in the same location.

“I’m a firm believer [that] if you accept the community as your own in your own need, they will actually come to your rescue,” Patel said. “That’s definitely been the greatest lesson of this entire disaster.”