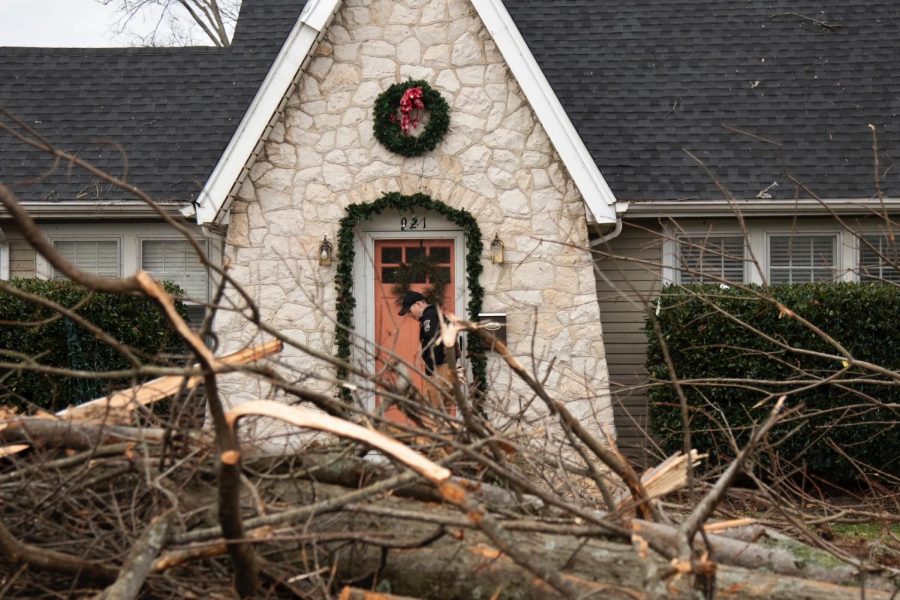 WKU students Mia Botkins and Comfort Gimba huddled inside Regents Hall as the Dec. 11 tornadoes passed less than half a mile away.

Many students were still occupying residence halls when the storm passed.

“We were advised to stay away from windows, and many of our RAs were giving us directions on where to go and where the safe areas were,” Gimba said.

Gimba, a student from Texas, is all too familiar with tornado warnings. Tornadoes touching down close to campus was a shocking and devastating event to see, she said.

“Once we were getting the alerts, I alerted my parents and let them know what was going on down here because we were seeing a lot of damage and fires and people trapped, and at that point I felt that we were next to get hit,” Gimba said.

Students were advised to stay in the residence halls during the storm, many unable to see the extent of the damage.

“We heard a lot of talk of damages from other buildings and restaurants but most of us didn’t believe it until the next day when we went out and saw the damages ourselves,” Botkins said. “I was really shocked to see how it destroyed so much and how there were so many people affected, it was sad.”

Gimba then began to contemplate recovery efforts. She said there were many affected and would need help getting back on their feet.

“I was devastated to see how quickly a community can be standing one minute and destroyed the next,” Gimba said. “The questions of ‘How people are going to go on after this? Will there possibly be another disaster?’ I was more worried about all those things than anything else.”

Trevor Huddleston, a junior at WKU who studies sport management, organized with his fraternity brothers to aid in cleanup. Huddleston was in his apartment near campus the night of the tornado, just a block from where it moved through town.

“That night, I’ll be honest, was probably the scariest night of my life,” Huddleston said. “I’ve been in the hospital before when I was a kid. I’ve had my body hooked up to numerous machines and none of that comes anywhere near as scared as I was that night.”

Huddleston hid in his closet with his dog after receiving the alerts. He said he did not feel secure or safe
in his apartment so he drove to his fraternity house, which was the safest and closest place he could think of.

“I picked up my dog and got in my car, I didn’t even lock my apartment, and I drove over to my fraternity house as quickly as I possibly could,” Huddleston said.

Huddleston and several of his Alpha Tau Omega brothers were still in the Bowling Green area when the disaster struck. Huddleston said the first thing on his mind was how he could help his community.

“The first thing we wanted to do [after the tornado] was, we wanted to help out in the community as soon as we possibly could and wherever they needed us,” Huddleston said.

Originally from Pittsburgh, Huddleston said he is unfamiliar with this type of weather. His desire to give back to the community came in part because of the “southern hospitality” he received when he came to WKU.

“Making that transition, going from high school to a new part of the United States and starting a new chapter in your life is scary for a lot of people, and being a student at Western you just get that southern hospitality,” Huddleston said.

“That’s what makes living here such a blessing, knowing that you’re going to have people here for you that are going to help you in whichever way they possibly can.”

The following Sunday, he was ready and looking for ways to help Bowling Green. He received a text message from one of his fraternity brothers mentioning helping the owner of WK Liquors.

“One of our alumni received a phone call [from the owner of WK Liquors] saying that he needs a lot of help with the store, and so me and several friends all got together and said, ‘Let’s go, let’s help, let’s get over there as soon as we can and start working,’” Huddleston said. “And so for about three-and-a-half to four hours we were picking up the area, the debris, doing whatever we could do to help.”

While there, Huddleston helped collect the unscathed bottles and load them into a trailer for storage. He also aided in cleaning up the destroyed shelves, shattered wine bottles and broken boxes that remained in the remnants of the store.

“It’s really opened my eyes to appreciating your life and saying that you can’t take stuff for granted because just with a snap of a finger you can lose everything,” Huddleston said.