Lady Toppers open their 2022 season with a win over Bellarmine 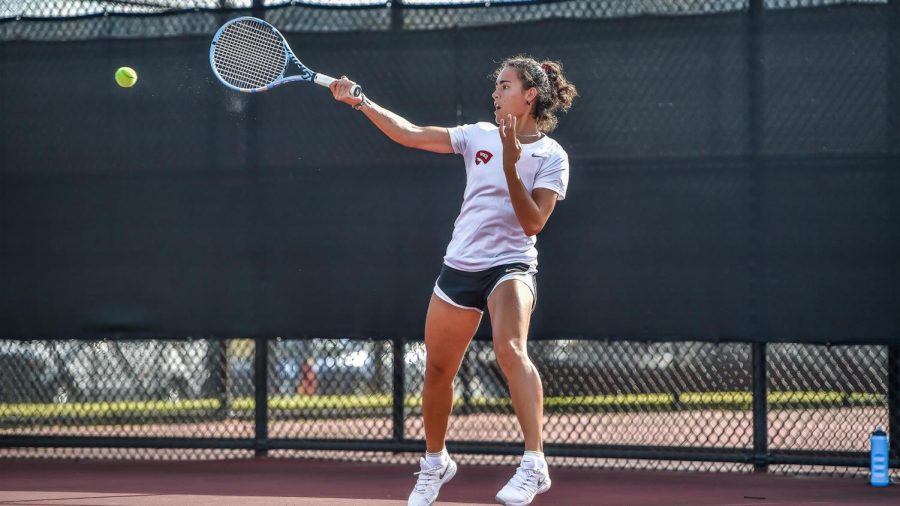 WKU senior Laura Bernardos went 6-7 in singles play and 6-8 in doubles across the 2020 tennis season.

WKU Tennis opened its 2022 season with a 5-2 win against Bellarmine Monday afternoon, improving its record to 8-0 all-time against Knights.

“I thought the team played well,” WKU head coach Greg Davis said in a press release. “Bellarmine has a much-improved team, and we knew going into this match that it wouldn’t be easy. Our freshmen Sofia, Rachel and Mariana did a great job in their first college match.”

The Lady Toppers started the match off hot, jumping out to a 2-0 lead. The No. 1 doubles pair for WKU, redshirt sophomore Paola Cortez and redshirt junior Cora-Lynn Von Dungern, won a 6-2 decision before the No. 3 duo of freshmen Mariana Zegada and Sofia Blanco took a 6-4 victory, giving WKU the opening point.

The Lady Toppers won the second point after redshirt senior Laura Bernardos dominated singles play with a 6-4, 6-0 in before the Knights came roaring back to tie the match at 2-2.

Up next, WKU will host its next six matches in Bowling Green, beginning with UT Martin on Jan. 23 at 2 p.m.