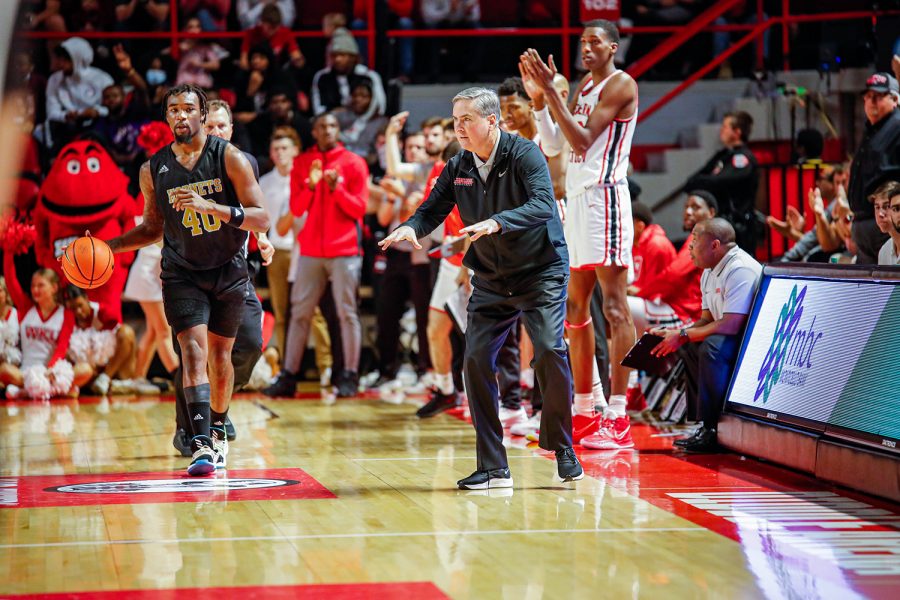 Hilltoppers’ head coach Rick Stansbury makes a calming motion to his players during the final seconds of their game against the Alabama State University Hornets at Diddle Arena on Nov. 9, 2021.

The WKU Men’s Basketball team will be without the services of newcomers Keith Williams and Zion Harmon.

According to the Bowling Green Daily News, head coach Rick Stansbury said Williams, who transferred in from Cincinnati, had his appeal for immediate eligibility denied by the NCAA. Meanwhile, Harmon is no longer enrolled at WKU due to personal reasons.

“Keith Williams, his appeal has been denied and he will be ineligible,” Stansbury told the Bowling Green Daily News on Tuesday. “We’re highly disappointed in the decision from the NCAA, not just for us but for the kid. Keith’s been a terrific young man. He’s worked hard this fall and stayed engaged… This is where it is. I hate it for the young man as much as us.”

Williams initially declared for the NBA Draft in April but ended up going into the transfer portal in late June.

For his career, Williams averaged 9.6 points, 3.2 rebounds and 1.3 assists in 22.5 minutes while finishing 35th on Cincinnati’s all-time scoring list with 1,156 career points. During his tenure as a Bearcat, he contributed to American Athletic Conference Tournament titles and NCAA Tournament appearances in 2018 and 2019, and to two AAC regular-season titles in 2018 and 2020.

“He was a terrific player. There’s no doubt he could’ve helped us in all areas,” Stansbury said to the Daily News. “It says a lot about who he is as a person to hang in here and continue to fight through all of this when he had his college degree already and he didn’t have to, but he did well in school and he worked hard and he was ready to go for us. I hate it for everybody, most importantly for him.”

Zion Harmon signed on the dotted line to become a Hilltopper on Nov. 11, 2020. Now he’s left the program and the school for the time being.

“Zion is not enrolled this semester for personal reasons,” Stansbury told the Daily News. “We continue to support and help in any way that we can.”

Prior to WKU’s exhibition against Campbellsville on Nov. 1, Stansbury announced that Harmon would not be playing any time soon due to personal issues and there was no time frame on his debut with the team.

Two weeks later, it was announced that graduate guard Camron Justice was granted an extra year of eligibility after not seeing the Diddle Arena court since 2019, adding another backcourt option while the program waited for Harmon to come back, ultimately to no avail.

Harmon was a true freshman out of Marshall County High School, where he averaged 22.3 points per game in his senior year. Harmon was a consensus four-star recruit and a top-50 prospect in the country according to ESPN.

Harmon removed all of his WKU related posts from his Instagram and does not follow the team’s official page or any of the players.

WKU will turn its focus to its annual Florida road trip, starting with Florida Atlantic. That matchup in Boca Raton will be played on Thursday evening at 6 p.m. CT. The game will be broadcast on the CBS Sports Network.