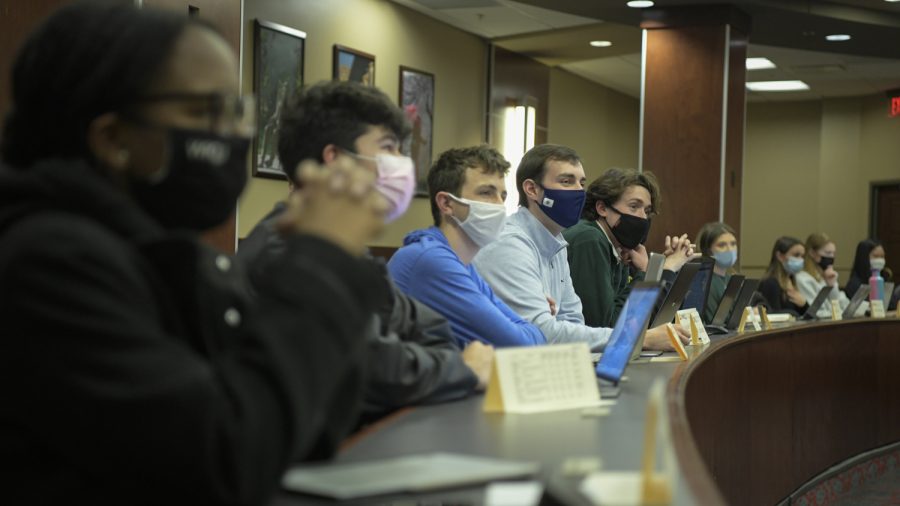 Members of WKU’s Student Government Association meet on the evening of Tuesday, Jan. 18 2022, at the Student Senate Chambers on the second floor of Downing Student Union. Here, members listen as a member of the executive branch speaks from the podium.

Editor’s note: A previous version of this article incorrectly stated SGA’s sign-up dates for the spring election season. The Herald regrets the error.

The Student Government Association met for the first time in 2022 on Tuesday to discuss a bill regarding the tornado relief effort within the WKU community and to welcome a pair of guest speakers.

The start of the meeting was marked by a guest appearance by Dean of Potter College Terrance Brown. Brown had an inspirational message to share within the walls of the senate chamber to kick off the new semester.

“Go out and talk to your fellow peers,” Brown said. “Find out what people really need and really want.”

Brown was also questioned on the status of the WKU Commons at Helm Library’s construction.

“Although I am not at liberty to say for sure, it will most likely open during the fall,” Brown said. “However, when the building is done, it will be a stunning building.”

The second guest speaker of the evening was Bella Mukonyora, a religious studies professor at WKU. She emphasized the importance of the religious studies department and told senators what they could personally do to help the community regarding religious services in the Bowling Green area.

“Just reach out to the churches in town,” Mukonyora said. “Just say you are a WKU student. You can help.”

SGA President Matthew Wininger kicked off the bulk of the meeting’s business by welcoming all senators back after winter break. He announced an initiative to create a student resource handbook for students, particularly underclassmen. He encouraged all committees to pitch in on the project.

Speaker of the Senate Tess Welch officially announced dates for the spring election season for SGA. Sign-ups end on April 8 and elections will be held April 18-19.

The last order of business was voting on bill 1.22s, which sought to increase relief funding for the food pantry in the WKU Office of Sustainability. The tornado recovery effort has drained many of the pantry’s resources, including food and toiletries, and bill 1.22s would provide $1,000 for restocking. The senate held a vote and bill 1.22s passed with unanimous consent.

News reporter Jake Jones can be reached at [email protected].