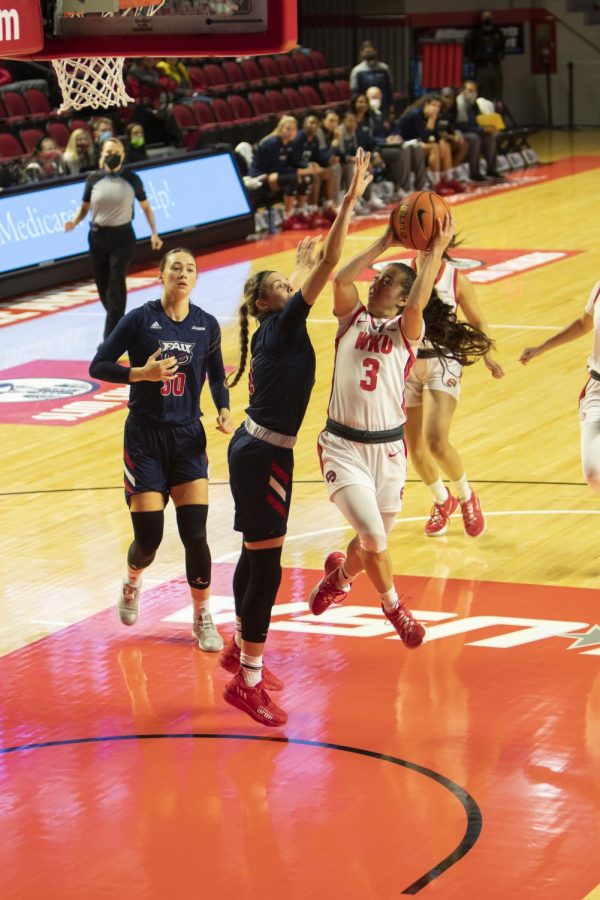 WKU guard Alexis Mead attempts a layup during the game against FAU on Jan. 20.

The Lady Toppers (13-4, 6-0 C-USA) improved to an eight-game win streak after defeating the Florida Atlantic Owls (4-12, 0-5 C-USA) 73-49 Thursday afternoon at Diddle Arena. This was the first game of the season the Lady Toppers held an opponent to under 50 points.

The WKU offense was efficient all afternoon. The Lady Toppers dominated the Owls 32-16 in the paint. WKU shot 29-of-67 (43.3%) from the field and 9-of-20 (45%) from behind the three-point line and played at an incredible pace, despite only scoring nine fast break points.

“We’re pretty hard to stop in transition and that wears teams down,” WKU head coach Greg Collins said. “It wore out FAU today. I think in the first quarter, they were pretty good at getting back. Second quarter, not quite as good. By the time we got to the third quarter it was hard. So I was really proud of how we were initiating in transition with solid team defense.”

The Lady Toppers defense was stellar Thursday afternoon. They held the Owls to a horrendous shooting performance, as their opponents shot 16-of-49 (32.7%) from the field and just 5-of-21 (23.8%) from behind the arc.

WKU was dominant defensively in the interior, only allowing 18 points in the paint and taking the ball from FAU 13 times. The Lady Toppers also held the Owls to just four fast break points. It was the fourth time in the last five games WKU has held an opponent under 60 points.

“As a coach, it’s more of a sigh of relief, because now I know that they have that confidence to do that in a game again next time,” Collins said. “They work hard. They work hard individually. So I’m thrilled for them to do that, but I know they can do it again”

Kulo started the second quarter sizzling, scoring eight straight points to give life to the DIddle Arena crowd. Mead also got going in the second quarter. She scored six points in the quarter all via layups. The Lady Toppers exploited the Owls’ lack of interior defense, a 2-3 zone in the first half. Senior forward Meral Abdelagwad hit a three-pointer at the buzzer to send the game to the break, with WKU up at halftime 41-32.

The Lady Toppers held the Owls to six points in the third quarter. They scored 15 of their own while freshman Macey Blevins got going in the second half with three three-pointers. The home team’s lead swelled all the way to 14 before the final ten minutes rolled around.

WKU maintained momentum in the fourth quarter, refusing to let up defensive pressure. The Lady Toppers did not allow the Owls to get into a rhythm the entire second half, mustering jus 17 points in the final twenty minutes of the game.

The Lady Toppers will look to continue their eight-game win streak against the Florida International Panthers Saturday, Jan. 22 at noon at Diddle Arena.