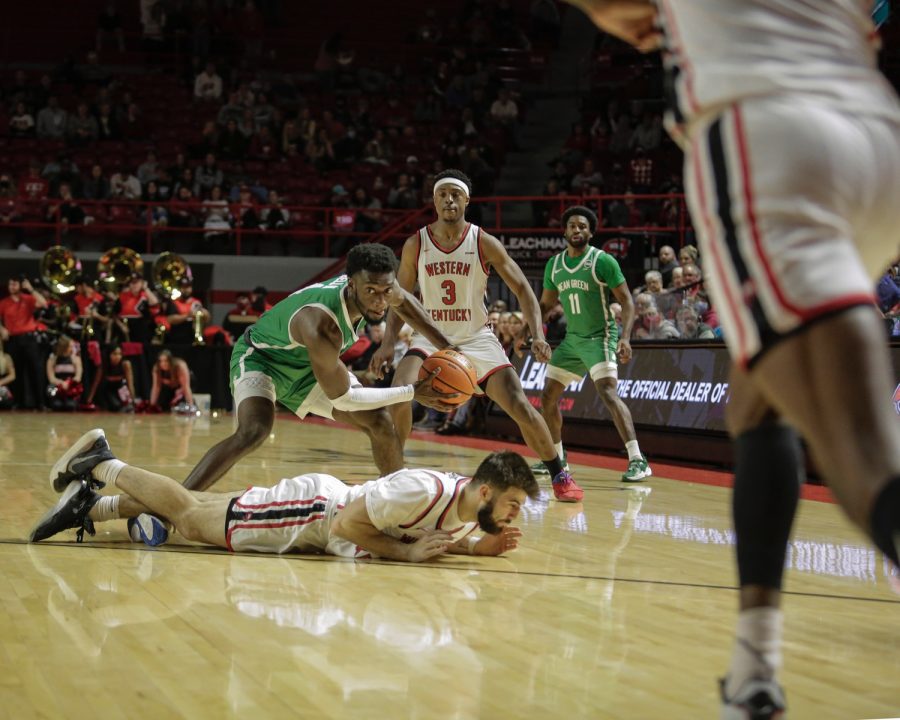 “Any time you go on the road it’s never easy,” WKU head coach Rick Stansbury said. “The margin for winning and losing is zero and give them some credit, they made some plays.”

The married graduate started off the game on fire, scoring WKU’s first seven points. Justice hit a three-pointer during that stretch, extending WKU’s streak of at least one made three in 1,087 straight games, the third longest streak in the country.

It definitely was a shooter’s gym in Boca Raton., because both offenses shot the lights out with WKU shooting 63% to FAU’s 52% in the first half.

The Owls were able to keep it close going into the locker room, in part due to their ability to get rebounds over the Hilltoppers. FAU outrebounded WKU 14-7 and 6-to-0 on the offensive boards, leading to eight second chance points while WKU had zero.

The Owls’ big man Vladislav Goldin was able to get into the body of the Hilltoppers’ big man Jamarion Sharp, getting easy shots at the rim and creating space for his teammates to get to the paint easily. FAU scored 20 points in the paint in the first half. His play ultimately kept Sharp off the scoreboard for the whole game.

The Hilltoppers came out of the second half flatfooted, turning the ball over twice in the first two minutes when they only had three for the entire first half. Fortunately for WKU, FAU was not able to take advantage as the Hilltoppers kept the lead early.

McKnight proceeded to get hot, turning his mid-range hall of fame badge on and knocking in baskets from the mid-range and at the rim. His play opened up lanes for him to pass when needed and his teammates knocked down open shots.

The turnovers and three-pointers came back to bite the Hilltoppers as the Owls took the lead, with 6:01 left, off of back-to-back threes to cap off a 7-0 run in 40 seconds. FAU didn’t slow down, raising their lead up to nine points.

“We had some defensive lapses; guys not rotating, missing box outs, stuff like that,” Justice said. “It’s something we have to check ourselves.”

WKU didn’t quit, starting to be aggressive again and brought itself back to a one-possession game after a made three from senior Josh Anderson with 2:01 left. The Hilltoppers had multiple chances from multiple players to tie the game, but the shots just didn’t fall.

The Owls finished the game on a 8-0 run, slamming the door shut for any chance of a Hilltopper comeback.

WKU will conclude its Florida trip Saturday evening, this time in Miami to take on Florida International. The Hilltoppers defeated FIU 84-71 in Diddle Arena earlier this season on Jan 8. Tip off for Saturday’s game is set for 6 p.m. CT.