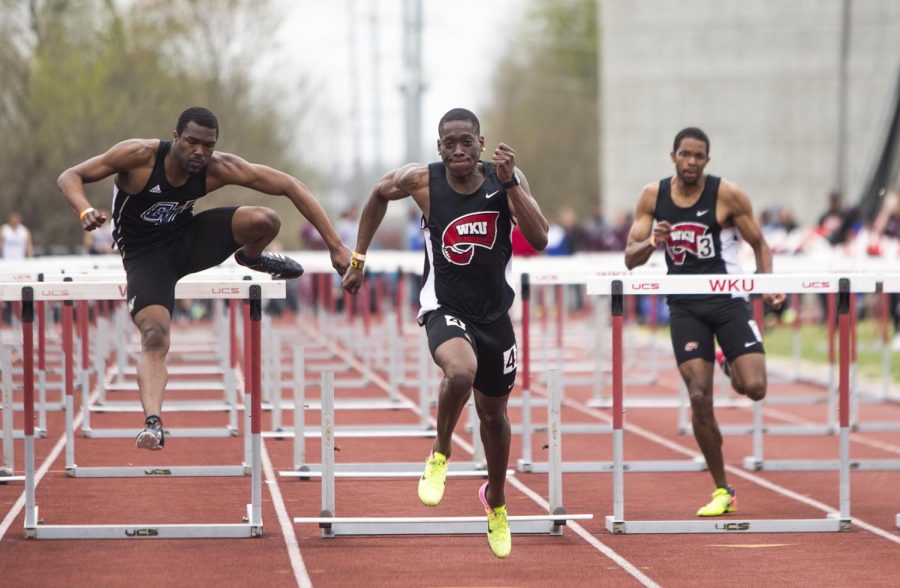 Johnathan Hayden (center) runs toward the finish line after toppling the last hurdle during the Hilltopper Relay event which took place on Friday, April 6 at the Charles M. Rueter Track and Field Complex. Hayden took first place in the 110m hurdles.

The WKU Track and Field team brought back 13 top-10 finishes this weekend at the Vanderbilt Invitational.

Senior Savannah Heckman took home the 5,000-meter title after beating the rest of the field by 50 seconds with a personal best of 17:04.66.

“I’m very pleased with the effort across the board,” Director of Cross Country/Track & Field Brent Chumbley said in a press release. “We had a lot of improvements from last weekend. Savannah had a great meet again and we had several PRs throughout the team this week.”

The men’s team placed fifth in the 4×400-meter relay and the distance medley relay. Many personal records were set during the invitational, including juniors Cedric Johnson in the 60-meter hurdles, Rafael Teodoro Da Silva the 400, freshmen Jordan Eddy the 800 meter and Keegan Barnette the mile.

“The meet went about as well as it could when it’s all put into perspective,” assistant coach Brooks LeCompte said in a press release. “We had a hard week of training and got back into the weight room, so they felt it a little. However, I feel today was a solid step forward for freshmen Barnette, Eddy, and [Trey] Kraimer. I thought Elyssa [Toal] started her career as a Hilltopper very strong in the DMR and mile. We still have a ways to go overall, but right now we are just in grind mode.”

The Hilltoppers will compete in the Louisville Invitational Saturday.