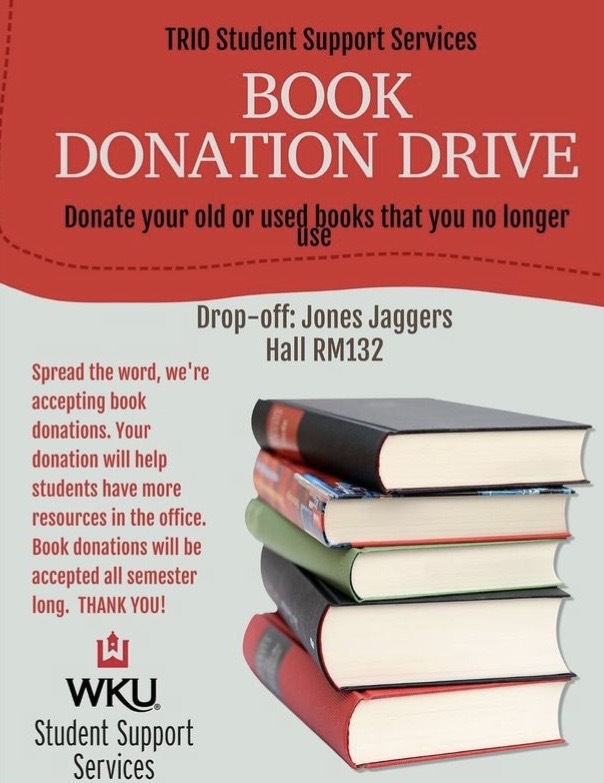 The TRIO Student Support Services Program is hosting a used book donation drive for the entire semester to expand textbook resources for students who may need help acquiring necessary materials.

“We are asking some of our upperclassmen students who have been here for a while if they have old books they want to donate to SSS students,” Niasha Shaw, academic and outreach coordinator for SSS, said.

“We will take books for as long as students continue to donate,” Shaw said. “Books can be dropped off at Jones Jaggers Hall room 132.”

The book drive is primarily looking for textbooks in order to alleviate costs for low income students in the program, but other books are also accepted.

According to Shaw,  the program offers resources to a select number of students who are first generation, income eligible or students with disabilities.

“Students come to us within the first two years, primarily their freshman year, and we help support them academically and socially,” Shaw said. “As they go on to the upperclassmen years, we ask that they give back to the office in ways such as mentoring. The book donation is another example.”

Students in the SSS program are always looking for ways to help one another, whether that be through tutoring, study sessions, or donating resources to one another, Kiara Braxton-Davis, TRIO SSS student coordinator, said.

Noticing that students were struggling to find textbooks and manage the extra cost, Braxton-Davis suggested her idea for the book drive to the office in hopes that textbooks might become more accessible to students in the program.

“I didn’t do too hot my freshman year,” Braxton-Davis said. “I started coming down to the office and started to get productive doing work. I’m pretty sure if I didn’t have the office, I wouldn’t have held on as long and I might have dropped out.”

After spending a considerable amount of time with SSS, Braxton-Davis was offered a job position at the office and was eventually promoted to student coordinator.

“I am a first generation and low income student, so it’s been a blessing to be down here and I just hope a lot of other people who are like me can come down and benefit from our office,”  Braxton-Davis said.