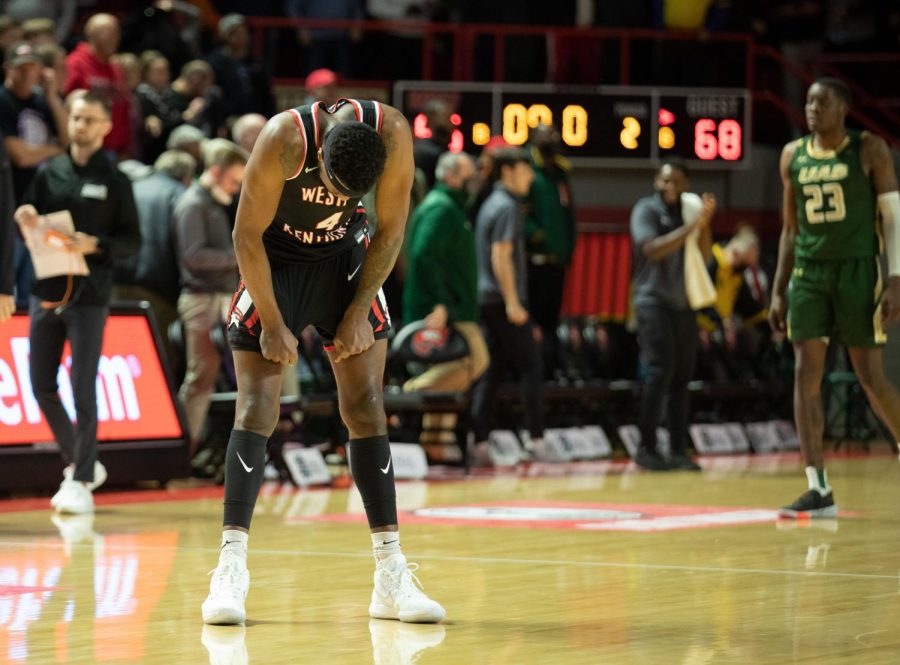 WKU senior Josh Anderson (4) hangs his head inside Diddle Arena after UAB's junior Jordan Walker hits a game winning three-pointer with under five seconds left in the game, giving the Blazers a 68-65 win over the Hilltoppers on Jan. 27, 2022.

Junior Jordan Walker led UAB with 21 points including the game winning three-point bucket that gave the Blazers the win.

“We didn’t win the game, but I couldn’t have been more proud of the way our guys battled and fought,” WKU head coach Rick Stansbury said. “You can point to a lot of things but effort wasn’t one of them.”

It was all about defense early in the game with both teams combining for only eight points in the first five minutes of the game with UAB having six of those eight. WKU started 1-of-7 from the field with three turnovers.

Whatever coach Stansbury said during the first media timeout got through to the team. The Hilltoppers immediately went on a 8-2 run to close the early gap. The Blazer defense gathered itself to bring the Hilltoppers back under control.

The fourth leading scorer in Conference USA decided to take over the game for the Blazer offense. Walker scored all of his 14 first half points in the last seven minutes and scored 14 of UAB’s last 16 points in the half.

WKU had trouble creating offense with the suffocating UAB defense, shooting 34% for the half but hitting three three-pointers while holding the Blazers to three three-pointers too. UAB was able to create seven turnovers including four steals which helped make a difference in the 34-27 halftime score.

The Hiilloppers got off to a better start in the second half, making four of its first six baskets including a no-look pass from Justice to Hamitlon for a dunk to force a Blazer timeout. WKU continued on to a double digit run despite only four Hilltoppers on the floor, due to no official timeout for an injury to sophomore Dayvion McKnight.

A thrilling last 11 minutes of the game saw both teams trading baskets, battling for the momentum of the game. WKU had many chances to take the lead but missed free throws and turnovers kept UAB ahead for most of the second half.

“You can point to one stat and when you’re in a grind game, a one possession game, no one misses them on purpose,” Stansbury said. “We go 7-of-13 in the second half and they go 6-of-7. You can chop it up in a lot of different ways. You can ask a lot of different questions, what ifs, but it comes back to one more free throw.”

With 44 seconds left, Justice was fouled from behind the arc leading him to make all three free throws to give WKU its first lead of the game. UAB’s graduate Justin Brown splashed a three on the other side to give the Blazers the lead back. Mcknight came back with a lob to Sharp to tie the game up at 65 with 12 seconds left.

With Diddle Arena up on its feet, loud as ever, heartbreak ensued. Walker was MIA for nearly 20 minutes of the second half before hitting the game-winner to give UAB the lead with five seconds left. McKnight came back down the court and put up a three to no avail.

WKU had the advantage in almost every important category but going 11-of-17 from the free throw line and starting 0-of-5 from the line in the second half ultimately made a big difference along with UAB winning the second chance points battle 12-7. Turnovers once again played a role with the Hilltoppers committing 15 to the Blazers’ 11.

WKU will return to Diddle for a Saturday matinee against ‘100 Miles of Hate’ rival, Middle Tennessee at 2 p.m. that will be broadcast on PBS and ESPN+.