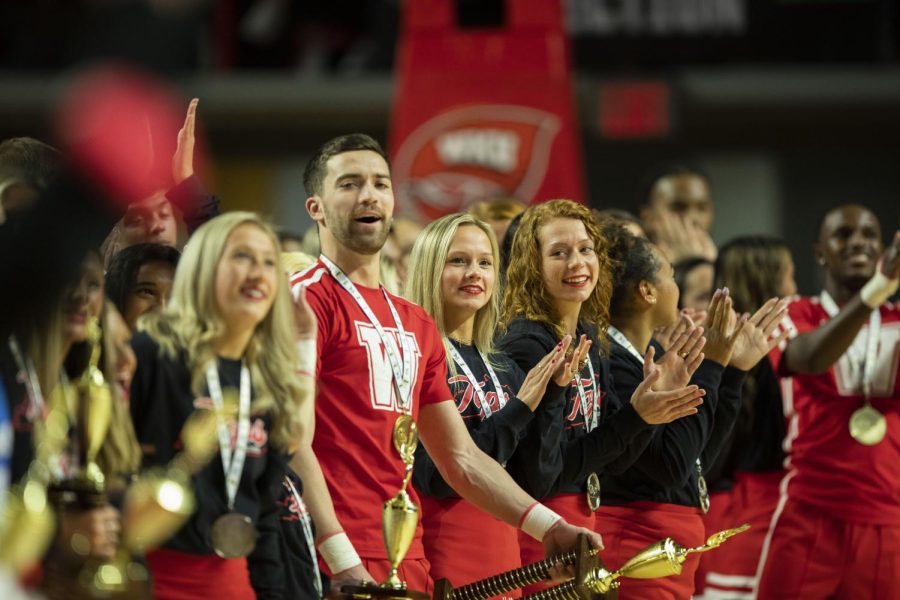 WKU cheerleaders cheer on the Hilltoppers during a basketball game on Jan. 27, 2022.

The WKU Coed Cheer team earned first place in the Small Coed D1A National Championship on Jan. 16. After hard work and a strenuous routine, they are national champions for the first time ever.
Winning a championship
WKU Cheer head coach Alli Lumpkin knew that her team had to push to earn respect as a program. Her squad has surely earned the respect they were seeking.

“We like to think that if we hit, that’s all that’s in our control,” Lumpkin said. “The athletes that are on the floor, all they can control is hitting, and the rest is in the judges’ hand.”

The Hilltoppers’ Cheer team did just that at the final competition, earning an event score of 92.7 and zero deductions.

“For me, it wasn’t so much about going there and winning the championship, it was about each individual stunt going out there and doing that as best as they could,” senior cheerleader Austin Harne said. “We probably spend over 2,000-3,000 hours just practicing the stunts all for two minutes and 30 seconds. You don’t want to let those hours go to waste by just losing your focus for one second. … That could be the difference between winning and losing.”

“Whenever we went out there, we knew that we had the ability to hit. We hit it eight times more.” Harne continued. “We wanted to showcase that we could do these skills and hit them perfectly.”

With lighter COVID restrictions for this year’s competition, fans were allowed in the arena to cheer WKU to victory.

“As a coach, I had a lot of people [at finals] that were excited to be there and watch both of our teams, so I can only imagine what that energy felt like on stage,” Lumpkin continued.

Senior team captain Gracie McCloud said the crowd is the least of her concern. She put her focus on the All Girl team, the coach and her mom. She knew her squad was doing well once her teammates got excited.

“It’s almost like a trance. You just get in the zone and block everything out,” Harne said. “I didn’t really take in the crowd until afterwards, and whenever I did, it was overwhelming. It wasn’t just our fans cheering for us, it was the people we were competing against that were also cheering for us, because that’s the product that we put out. They were happy for us. Feeling that from the crowd and having it surround us was something really special.”

The WKU cheer team gets recognized for the Co-ed team winning its first national championship and the all-girls team finishing as the national runner up. pic.twitter.com/Zt7no6WdGC

The workload
With winning comes sacrifice, and the WKU cheerleaders have sacrificed countless hours to become a national championship program. They spend their time preparing for game days on top of curating their routine for finals.

“We’ll spend maybe two hours focusing on the basics that we’re going to perform at games, and maybe 30 minutes to an hour working on our routine [for finals],” Harne said. “A lot of the early season prep goes into game day, and nationals comes later in the season.”

Being a senior, Harne has seen this program through its ups and downs. He hoped to leave his stamp on the program’s history.

“I wanted to make sure it ended on that high note,” Harne said. “Bringing back Coed’s first title was something really special for me.”

The WKU All-Girl team also placed second in the All Girl Division 1A finals with an event score of 91.3, just four tenths of a point behind national champion Alabama.

“I’ve also cheered all four years,” McCloud said. “I’ve been lucky enough to be on Coed and All Girl so I’ve been able to watch both teams grow. To see All Girl be so successful this year and last year and for Coed to start joining with that, it’s just amazing.”

As student athletes, Harne and McCloud both deal with heavy school loads, and as seniors, their work becomes much more tedious and stressful. They balance their school load with “20-30 hours” of practice each week.

“For me, cheer was my escape,” McCloud explained. “School is so demanding and so time consuming, so I use cheer as my escape. I’d bring my notes to practice and study between reps, but I still used [cheer] as a mental break.”


Lumpkin building a legacy on the Hill
Lumpkin has been on this stage before and knew what it took to get there, especially in a state that has seen a lot of success in the cheer world. The Kentucky Wildcat Cheer team has won 24 national championships, Lumpkin was part of three of those.

“There are a lot of very successful colleges that compete in the state of Kentucky and that typically bring home a title,” Lumpkin said. “To be in that company and being able to do that is where a lot of the pride comes in, too. To allow WKU to be represented like that and to be up there with all the other D1A programs in the country, it was good to bring it home to Bowling Green.”

Lumpkin has a very high standard and doesn’t like to lose. In her coaching career, she implemented things she learned throughout her cheerleading career that she knew her athletes could resonate with.

“It’s just getting [the athletes] to buy in,” Lumpkin said. “I was very lucky to have the respect coming out of the gate.”

Lumpkin understands that mental preparation is just as important as physical preparation, especially leading up to finals.

“About a month before [finals], they’re feeling comfortable in their skills, they feel physically prepared, now it’s a mental game at that point,” Lumpkin said.

“It started with attitude, persistence, absolute responsibility and then winning,” Lumpkin continued. “Those are things that they’re going to be able to take with them after cheerleading as well. Focusing on things like character development and mental toughness is the epitome of what we do and why we’re successful.”

Lumpkin believes implementing these tactics will allow the program to flourish and create a legacy they can be proud of.

“If we want to be respected as a program, we have to earn it,” Lumpkin said. “We’re going to push until that respect is earned.”