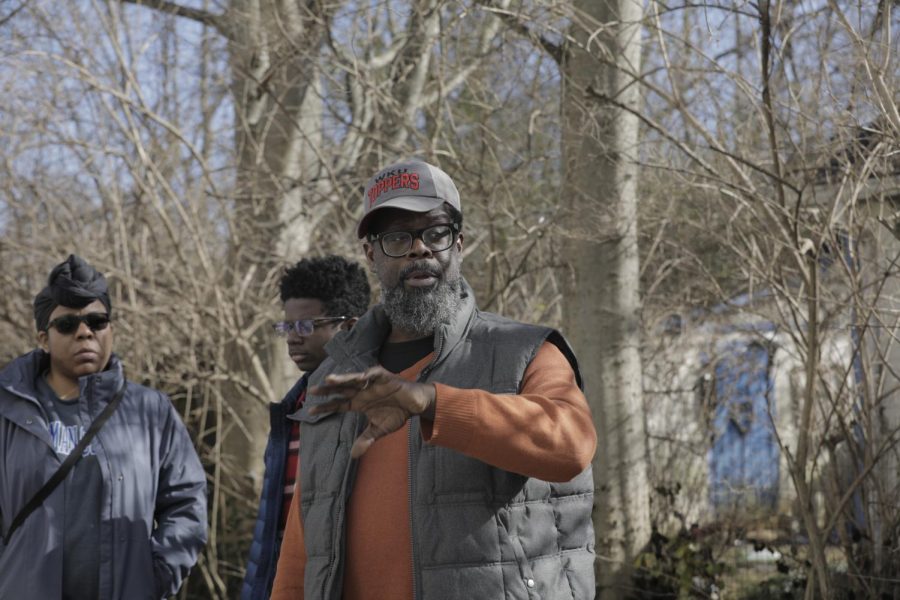 Lamont Jack Pearley, husband to Denise (left) and father of Lamont Jr. (center), sets the scene of what happened to his family's neighborhood on Dec. 11.

Stuffed animals, a book about the show “Friends” and a favorite K-pop album. These were some of the things 13-year-old Samara Pearley tossed into her emergency bag as an EF3 tornado churned towards her neighborhood on a dark December morning.

Thankfully, Samara wouldn’t need her emergency bag after all. The Pearley family home, located on Cabell Drive, was spared destruction by a matter of yards. The storms of Dec. 11 served as a turbulent baptism to the Bluegrass for Samara’s Bronx Folks.

“Wow, we’re really in Kentucky,” her father, Lamont Jack Pearley, says. “I took it as a welcome.”

Lamont and his crew, composed of his wife Denise along with Samara and her brother Lamont Jr., moved to Bowling Green from New York City in July of 2020. The Pearleys were well accustomed to blackouts and snowstorms, but nothing like what transpired that fateful night.

“I came home, Denise didn’t have such a great day,” Lamont recalls. “So I said ‘I’ll go get some pizza – a storm is coming through, we need anything?’”

The family ate an early dinner and retired to their rooms shortly after nine. A neighbor’s phone call a little later broke through the post-meal peace.

“Our neighbor calls Denise and says ‘tornados are coming’,” Lamont says. Their neighbor was correct – at that moment, a multi-state tornado was tracking its way through Mayfield, and the system it hailed from was firing off twisters in every which way.

The family remained glued to the TV until the news anchor told the Pearleys and the city at large that it was time to get to a safe spot. Their home had no basement, so the quartet piled into their kitchen pantry at the center of the house and prayed.

Outside the pantry, the monster crept closer.

Robert Ellis lived catty-corner to the Pearleys. A veteran of many Wyoming blizzards and no stranger to Kentucky storms, Ellis approached the night’s activity with curiosity.

“We’ve dealt with tornados ever since we moved here, when I was about nine years old,” Ellis says. “Never had one so close, I’ve always been lucky that they were a town over.”

While the Pearleys huddled under couch cushions behind the pantry door, Ellis went out on his porch to get a glance at the tornado. He had an estimate of where it was heading, but it only took half a cigarette to prove his theory wrong.

“What I think happened was, it probably hit the hill and kicked around to the other side of the hill, but there was only one way to find out,” Ellis says. “I could see swirling green lightning in the sky, and that’s when I was like, ‘I had it wrong.’”

The tornado barged down the 31W Bypass, flattening the liquor store a football field away from Ellis and the Pearleys. Ellis’ girlfriend, a sufferer of Hydrocephalus, felt the atmospheric pressure drop and could hardly hear. The Pearley’s ears popped over in the pantry.

“The house shook,” Lamont recalls. Ellis theorized the shaking was the arm of the twister attempting to pry the family’s roof away.

The storm came and went, and it was time for the Pearleys to assess the damage. They feared the kitchen windows had shattered, but were apprehensive to go check.

“They didn’t want me to go check, they were saying ‘no daddy, no!’” Lamont recalls with a laugh. “It was like a movie.”

The family kept an eye out for what Lamont called “unscrupulous behavior” in the following days. The storm had passed, but the family unit was wary of those wanting to prey on folks affected by the tragedy.

“We watch a lot of Walking Dead, and it looked like the Walking Dead,” Lamont says. “So any time we had to leave, we stayed together.”

Lamont Jr. accompanied his father on patrols of the neighborhood. The 14-year-old handled the event well, but remained on high alert for the remainder of the week.

“It was scary at first – I tried to stay calm, it took about a week for me to normalize it,” the younger Lamont says. “I was in battle mode, I guess you could put it that way.”

The family was without power, prompting Lamont to use his gas grill as their main way to cook. On his many trips to the store to stock up on gas, he recalled an eerie feeling while driving through the parts of town that took the brunt of the impact.

“Driving down Smith [Way], driving down Russellville Road, you could feel the spirits,” Lamont says.

Within a week, the family received an opportunity to move to an apartment while reconstruction of the neighborhood continued. The Pearleys packed up and left in a few day’s time, but their home wasn’t to remain vacant for long.

“Oddly enough, friends of ours moved into our place because their home was totally demolished,” Lamont says.

The new apartment gave the family a chance to breathe, unpack and start fresh, a blessing the Pearleys did not take for granted.

“When we got there, it felt almost like having a new start – we got past something traumatic and scary, and then as we’re unpacking we’re finding things we haven’t even seen since we moved to Bowling Green,” Lamont says. “Mentally and spiritually, it was good to see the kids pick out their rooms and decorate, step into their independence… that reminds you of what’s really important.”

Even though the storm is in the rearview, the Pearleys were reminded of that night when an AMBER alert lit up their phones just a few days ago.

“I will say there’s still a sense of PTSD,” Lamont says. “We were eating a couple of evenings ago, watching something and hysterically laughing, then our phones started going off – that’s the same sound. We didn’t want to look at our phones, we had to pause the TV to breathe and relax.”

Despite this, life goes on for Lamont at the new apartment. His work as the editor of The ​​African American Folklorist continues, albeit in his new office.

“We have a room that’s really my office, but I kind of made it a study for everyone and I haven’t been able to go in there because everybody’s using it,” Lamont says with a chuckle. “As for The African American Folklorist… the latest magazine is printed and we’re working on the next one, and all that other good stuff.”

Life goes on for Denise and Lamont’s kids as well. Samara kept her eyes on the bright side throughout the entire ordeal.

“We have power now, we have shelter; I just thought of the best. I didn’t think of the worst.”