Charlotte hands Lady Toppers their worst loss of the season 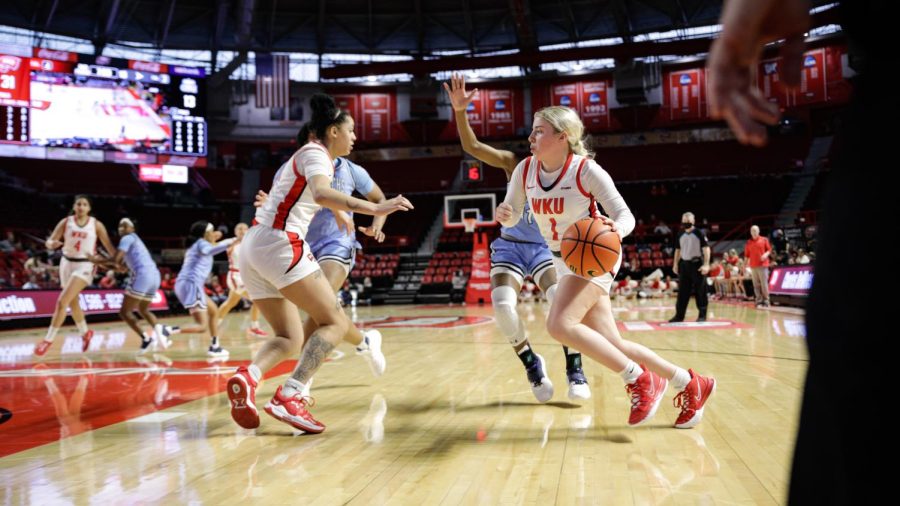 Lady Topper's sophomore guard Hope Sivori (1) , runs around freshman forward Jaylin Foster (11) to get a shot up in during their matchup agaisnt the Old Dominion Lady Monarchs on Feb. 5th in Diddle Arena.

The Lady Toppers did a poor job sharing the ball against the 49ers with only seven assists while not getting in a steady rhythm during the game. WKU was completely taken out of its style of play by the 49ers’ defense, only scoring 11 points in transition and zero points off turnovers.

“Honestly, we were holding the ball too long,” WKU head coach Greg Collins said. “We work on ball movement, we talk about ball movement. That ball was sticking in the player’s hands.We tried to solve that by dribbling, and we were dribbling right into turnovers or into bad shots.”

The Lady Toppers’ defense had no answer for the 49ers’ offense. Charlotte shot 31-of-70 (44.3%) from the field and 7-of-21 (33.3) from the three-point line. WKU was outrebounded severely in their matchup, losing the battle 52-40. The Lady Toppers only forced nine turnovers and had seven steals for the entire game. WKU was also dominated in the paint 36-14.

“Just about everything that could have gone wrong or we could have done wrong, we did,” Collins said. “They shot the ball well, part of that’s our defense, but they just shot the ball really well in the first half. It was just one turnover, one mistake after another.”

The 49ers controlled the game from the opening tip. Charlotte started the game on a 16-6 run and never looked back. They won the first quarter 21-6. The 49ers scored 20-plus points in all four quarters.

Sivori was the only bright spot for the Lady Toppers in the first half; she had 11 of WKU’s 18 first-half points. The score was 46-18 at halftime.

The Lady Toppers offensive struggles continued out of halftime. They shot 1-of-16 (6.3%) from the field in the third quarter and committed four turnovers in the quarter. WKU was severely out played by the 49ers and were out of sync with each other. The 49ers destroyed the Lady Toppers 89-41.

The Lady Toppers’ next game is Saturday at 1 p.m. against Old Dominion at Chartway Arena.

“If we don’t move that ball and get open shots, it’ll be another tough night,” Collins said. “We have to make sure that we do a better job. We need to be better and play better interior defense, and we have to score the ball. You just can’t win the 43 points.”