Missouri baseball midterms: Grading the first half of the season 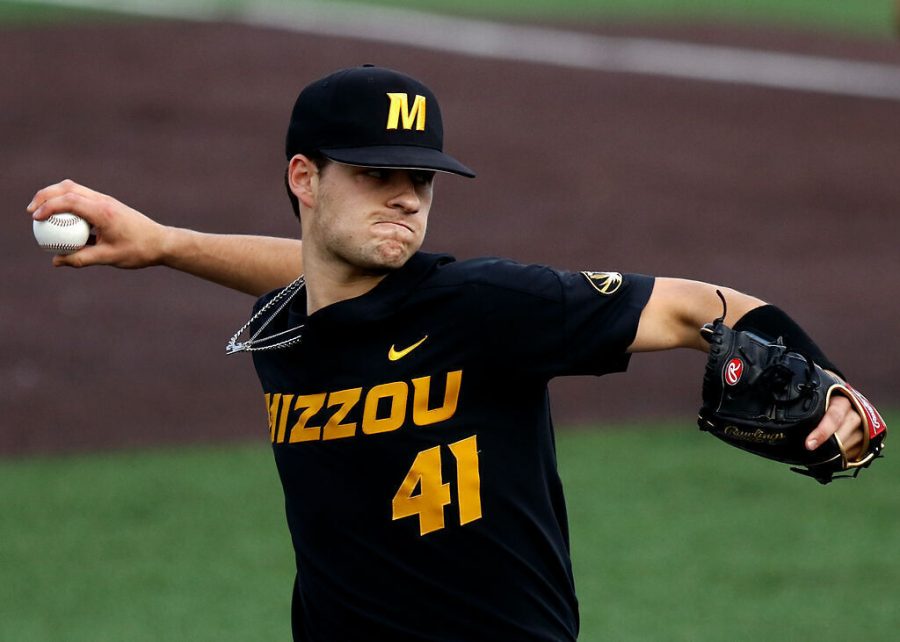 Missouri starting pitcher Zach Hise deals a pitch during a game March 27 at Taylor Stadium in Columbia. Missouri pitchers carries a 7.15 ERA through the season.

Missouri baseball is not where the team planned to be before the season. The Tigers are 10-17 and halfway through their 53 scheduled regular-season games. There have been winning streaks and losing streaks, but, in all, the team has underperformed.

With half of the season gone, here are the Missourian’s midterm grades for the Tigers’ season so far:

The performance of Missouri’s hitters has been acceptable, but it leaves a lot to be desired.

The Tigers are at the back of the Southeastern Conference in a lot of stats, but they have scored when they need to. Missouri averages 5.33 runs and has scored in double digits five times this season. When they win, they beat their opponents by an average of 4.8 runs.

The team has done well not striking out, ranking in the dead middle of the SEC standings, and the Tigers also have drawn the eighth-most walks in the conference.

One of Missouri’s batting problems is that the top of its lineup carries the team. Only two hitters with more than 10 at-bats have an average higher than .300 — a mark that is far more common in the college game than in the majors. Conversely, 10 Tigers have an average below .250. As a team, Missouri bats .242.

Most of the RBI are concentrated at the top of the order as well. Almost 30% of the team’s RBI this year come from three of its 21 players with a plate appearance — Andrew Keefer, Josh Day and Mark Vierling. With so many athletes stepping into the box, the stat really shows where the production is coming from.

Injuries have taken away some pop from Missouri’s lineup. Designated hitter Chad McDaniel, shortstop Day and second baseman Dalton McNamara all have spent some time on the injury list, with McDaniel and Day still out and McNamara just returning to the lineup in the past week.

Because of the injuries, Missouri coach Steve Bieser has had to experiment with guys who are not usually in the lineup. Only eight Missouri hitters with a plate appearance have more than 50 at-bats,  including McDaniel and Day. As the lineup gets healthier, it hopes to find more consistency.

The staff has shown brief flashes of its potential, but the occasional effectiveness has only made its overall performance seem even worse.

Take for instance Seth Halvorsen’s seven-inning shutout start against Texas A&M on Friday. It was a brilliant performance that gave the Tigers the momentum to capture their first SEC series win this season. The night before that, though, the Aggies detonated on the staff for 16 runs. And in the midweek game just two days prior, Missouri relievers blew a 9-2 lead in the seventh inning, giving up eight runs in the seventh inning to hated rival Kansas. The Jayhawks won 10-9.

Every pitcher who has started a game this season has an ERA over five save for one. The outlier, Lukas Veinbergs, comes in at 4.56. Veinbergs started the season out of the bullpen, but he worked his way into the midweek starting role and may make the jump to a weekend role against South Carolina.

Perhaps the biggest struggle in the first half has been walks. Tiger pitchers give up just under seven free passes per game, the most in the SEC by far. Missouri pitchers give up 1.86 walks and hits per inning on average. Of course, baserunners lead to runs, and Missouri has given up 201 of them this season. That mark is 59 more than the next SEC team, LSU.

The staff has not been free from injury problems. Konnor Ash and Zach Hise are fresh off the IL, but Trey Dillard has remained there all season. Freshman standout Ian Lohse gave Missouri fans and coaches a scare when he exited after just two outs in his last appearance in relief of Halvorsen on Friday, but Bieser said the change was out of an abundance of caution and that Lohse will continue to be available out of the bullpen.

Missouri had high expectations going into the season. The Tigers have been on the cusp of a regional appearance for years, and there was some speculation that this would be the year. Seven games under .500 is the opposite of where Steve Bieser and his coaching staff wanted to be halfway through 2021.

Recently, Missouri showed some fight and resilience in its series win over Texas A&M. Both pitching and hitting played way above their season averages. The Tigers will hope to build on the strong weekend moving into the back half of their 2021 season.