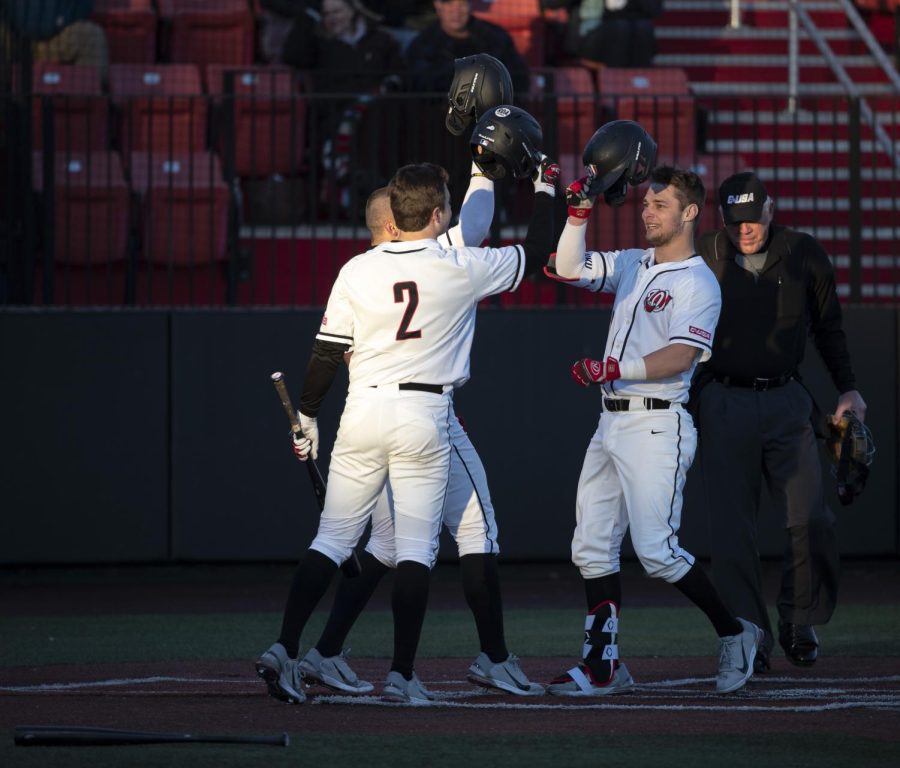 “I thought our guys competed really hard and that’s what we talked about, and we had a lot of energy in the dugout,” WKU head coach John Pawlowski said. “I thought they were ready to play… but I really liked the way that we played a game of baseball. We did a lot of positive things to put us in a position to win a game, and we were fortunate that we ended up winning a really close ballgame here on opening day.”

“Throughout the course of a year, you’re going to have some outings where everything seems like it’s working and other outings where just everything you throw gets hit,” Kates said. “This was kind of one that was in between, which is how most of them go. I feel like I battled, and I gave out a good quality outing.”

Sophomore first baseman Aidan Gilroy led the way for WKU. Gilroy reached base four times, going 3-for-3 with a home run. Freshman designated hitter Ty Batusich hit a home run of his own and knocked in two runs.

“It was unbelievable, It’s something a lot of people dream of,” Gilroy said.

Kates retired Western Illinois in order to start off the game, striking out one in the top of the first. Redshirt sophomore Ty Crittenberger walked on four pitches to start the bottom of the first for the Hilltoppers. Crittenberger stole second base later in the inning. Carberry retired the next three batters, stranding Crittenberger at second.

Kates opened up the second inning by hitting Leathernecks junior Adam Juran. Juran then swiped second and third base on wild pitches. Junior Chase VanDerGinst knocked him in with an RBI single to right field. VanDerGinst stole second and scored shortly after by a single to left center field by senior Kory Olsen. Kates retired the next two batters to end the inning.

Junior Matthew Meyer walked and swiped second on a passed ball to start the bottom of the second. Gilroy batted in Meyer with a single to right field. Sophomore Hunter Evans reached on an error, moving Gilroy over to third. Gilroy then scored on a wild pitch before Carberry struck out junior Jackson Gray to end the inning.

Senior Dillion Sears recorded a bloop single in the top of third but was later thrown out on a steal attempt in a strike em’ out, throw em’ out double play. The Hilltoppers’ third baseman Matthew Meyer walked in the bottom of the third but was stranded at first.

Kates retired the Leathernecks in order to start the fourth inning. Aidan Gilroy led off the bottom of the fourth with a deep home run to right field to give the Hilltoppers a 3-2 lead. WKU didn’t muster a rally after taking the lead.

Kates maintained the Hilltoppers’ one run lead in the top of the fifth, leaving a Leatherneck stranded on base. WKU went three up and three down to end the inning with Western Illinois reliever Brian Raymond on the mound.

Jake Kates recorded his fifth and sixth strikeouts of the game in the top of the sixth while forcing a three and down. Gilroy continued his strong performance, reaching base for the third time. Evans followed him with a double. Freshman Brodie Mackay then knocked Gilroy in with a sacrifice flyout, giving WKU a 4-2 lead.

Freshman Cooper Hellman came in to relieve Jake Kates to start off the seventh. Hellman retired the side in order, striking out two in his first appearance with the Hilltoppers. Senior Justin Carlin doubled off Raymond in the bottom of the inning. Batusich followed up the double with an opposite field home run giving the Hilltoppers a 6-2 lead.

Hellman walked senior Toby Allred to start off the eighth inning and hit the following batter, putting runners at first and second. Western Illinois’ Nick Mitchell launched a single to deep left field, but Allred was gunned down at home plate, keeping the score at 6-2.

Hellman was relieved by junior Mason Vinyard with one out in the eighth, leaving runners on first and second. Vinyard allowed a two-run double to Western Illinois’ junior Derek Botaletto, cutting the Hilltopper lead to two.

WKU’s Aidan Gilroy led off the bottom of the eighth with a single to left center, giving him three hits on the day. He attempted to steal second but was called out as he overslid the bag. The Hilltoppers failed to score, keeping their lead at 6-4.

Pawlowski decided to stick with Vinyard in the ninth to close out the game. Vinyard proved Pawlowski made the right decision, retiring the Leathernecks in order to give WKU the 6-4 victory.

“Mason had a tremendous year for us last year, and he’s our closer,” Pawlowski said. “He made one mistake, and they put a good swing on it but I’m very confident [in him]. We have all the confidence in Mason, and he found a way to get it done. He’s off to a great start for us.”

Up next, the Hilltoppers will take on Western Illinois once more tomorrow at 3 p.m. Senior pitcher Sean Bergeron will start on the mound for WKU.