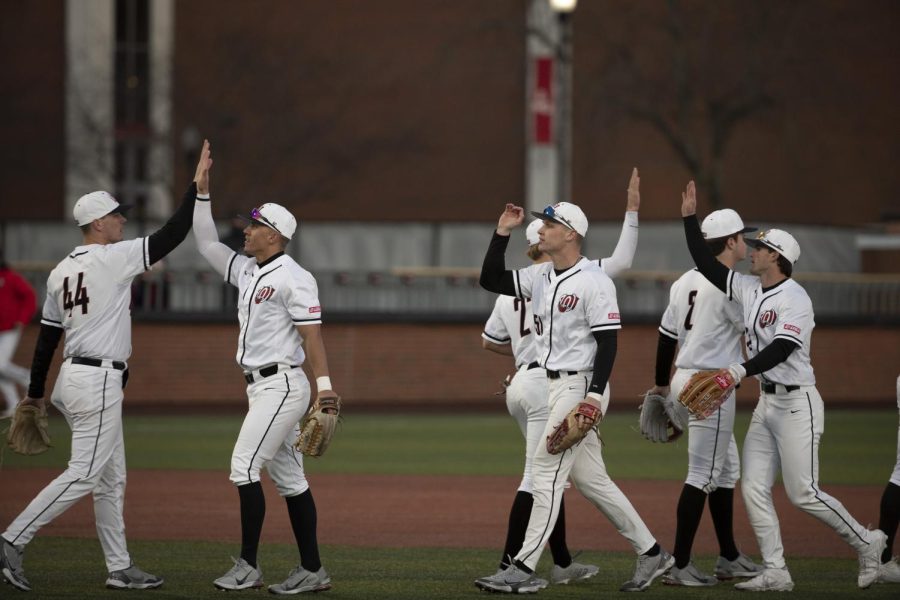 The Baseball team celebrates a win against Western Illinois on the opening day of the 2022 season on Friday, Feb 18. WKU won 6-4.

WKU Baseball (2-1) came out on top of a back-and-forth battle against Western Illinois (1-2) 9-6 Sunday afternoon at Nick Denes Field, taking its opening series of the 2022 season.

“We played well,” Pawlowski said. “We just made it tough on ourselves sometimes, but I like the way our team responded today, especially after what happened yesterday.”

Western Illinois junior Chandler Fochs had a solid outing but could not record the win. He went six innings, allowing three runs, one earned, on six hits with three strikeouts.

The Hilltoppers were once again led by sophomore Aidan Gilroy who had three hits. Freshman Brett Blomquist and junior Tristin Garcia also added two big hits each. Sophomore Andrew Delaney was the hero for WKU as he blasted a three-run go ahead double in the eighth.

“It was definitely one of the coolest baseball moments of my life,” Delaney said. “It’s my sophomore year here, last year with COVID and everything we had a lot of guys coming back so I haven’t really had my opportunity to really show out here, really fight for my team. So it was definitely a very cool moment coming out here in a big game like this to open up the year. We want to start hot so definitely a huge win for us and a very cool moment.

Western Illinois freshman Nick Mitchell started the game off with a single. Mitchell stole second base later in the inning. Terbrak forced a ground out to end the top of the first, stranding Mitchell at third.

Fochs allowed a one-out double by Gilroy, his fifth hit in seven at bats. Gilroy was picked off by Fochs in the next at bat. Fochs recorded his first strikeout to end the inning.

Terbrak retired the first two Leathernecks he faced to start the second inning before senior Toby Allred singled. Senior Dillion Sears reached first in the next at bat due to an error by WKU shortstop Brodie Mackay. Terbrak forced another groundout to end the inning.

Fochs made quick work of the first two Hilltoppers before Tristin Garcia laced a triple into the right center field gap. On the throw into third, the ball bounced out of play allowing Garcia to take home giving the Hilltoppers an early 1-0 lead. Fochs ended the inning, retiring the next batter.

Terbrak sat down the first batters in the third before junior Derek Botaletto drove a double to left field. Terbrak ended the inning in the next at bat. Freshman Brett Blomquist led off the bottom of the third with a single in his second at bat of the season. Mackay grounded into a 6-4-3 double play in the next at bat. Fochs struck out sophomore Ty Crittenberger to end the inning.

The Leathernecks went down in order in the fourth as Terbrak struck out his third batter of the day. In the bottom of the inning, Gilroy reached third on an error by the right fielder. Gilroy scored on a wild pitch giving WKU a 2-0 lead.

Terbrak hit Sears to start the fifth, and Sears moved over to second on a fielder’s choice. Later in the inning, senior Kory Olsen knocked him in with a single cutting their deficit 2-1. The Hilltoppers got a leadoff hit from junior Matthew Meyer but were unable to score in the fifth.

The Leathernecks started the top of the sixth with a one-out double from junior Adam Juran, followed by junior Chase VanDerGinst being hit by a pitch. Senior Aristotle Peter replaced Terbrak with the bases loaded and one out in the sixth. Allred quickly gave the Leathernecks the lead with a two-run RBI single to right field. Sears then knocked in another on an RBI groundout, giving the Leathernecks a 4-2 lead.

The Hilltoppers cut the deficit to one in the bottom of the sixth thanks to a single and stolen base by Gilroy followed by an RBI double from Batusich making the score 4-3.

Peter allowed a leadoff single to Mitchell to start the seventh. Mitchell moved over to third on a couple groundouts and scored on a wild pitch, extending the Western Illinois lead 5-3.

Sophomore Jacob Greenan came in to relieve Fochs in the seventh and walked the first two batters he faced. Blomquist ripped an RBI double to left cutting the WKU deficit to 5-4 and prompting a pitching change. Senior Brian Raymond relieved Greenan and allowed a two-run RBI single over the first baseman’s head by Crittenberger, giving the Hilltoppers a 6-5 lead.

Freshman Cooper Hellman started the eighth inning for the Hilltoppers. Hellman hit the first batter he faced and then allowed a ground rule double by freshman CJ Richmond. Hellman made a throwing error on a bunt, tying the game 6-6. Junior Mason Vinyard relieved Hellman with no outs and runners on the corners. Vinyard came up huge for the Hilltoppers, striking out three in a row to end the inning and keeping the score tied.

Sophomore Kyle Rosenfeld started the eighth inning on the mound for the Leathernecks. He quickly walked Carlin, and allowed a single to Garcia before walking Meyer to load the bases with no outs. WKU pinch hitter sophomore Andrew Delaney l drilled a huge go-ahead three-run RBI double to give WKU a 9-6 lead.

“I like to think, ‘Go for the strikeout at all times,’” Vinyard said. “But whatever happens happens, it’s baseball, but when your stuff’s going, you really want to go for the strikeout, especially in those kinds of situations with runners in scoring position.”

Up next the Hilltoppers will travel to Nashville, Tenn., to take on Lipscomb Tuesday at 3 p.m.