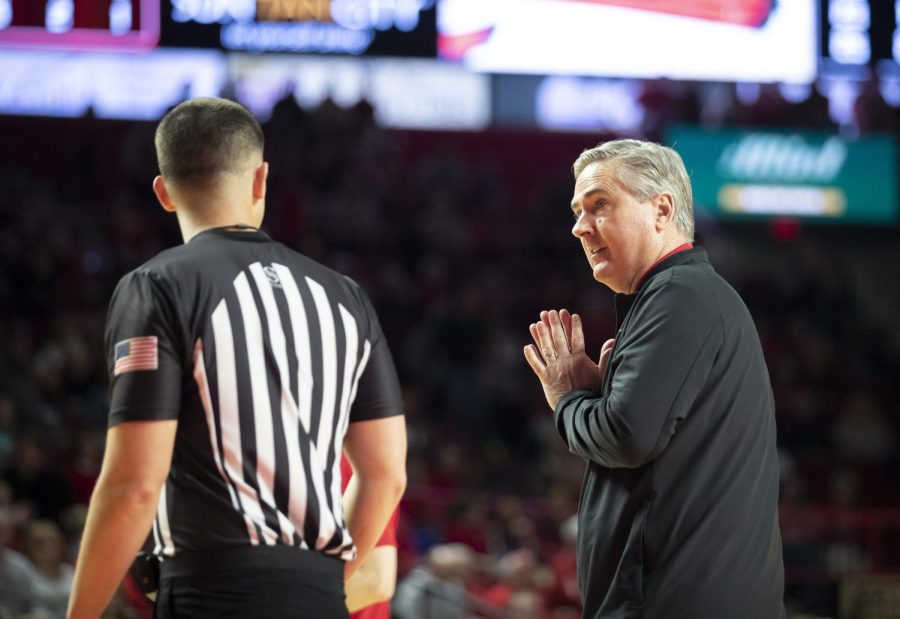 WKU Coach Rick Stansbury makes his feelings about a call known during the WKU, Old Dominion matchup on Saturday, Feb. 19. WKU went on to win 73-64.

WKU Basketball had its longest break from the court since before conference play started. The Hilltoppers will end up with a full week of rest before heading south of the border to finish this year’s chapter of the ‘100 Miles of Hate’ rivalry with Middle Tennessee on Saturday.

“Since they left here, including our game – I think it’s been eight games – I know they’re shooting 45% from the 3-point line as a team,” Stansbury said. “That’s a pretty good stat, and again, they’re undefeated at home. No one’s beaten them there and they’re playing really well. Coach [Nick McDevitt] has done a really good job with his team, and they’re playing really well.”

The rivalry is on a different level compared to the last few years, as these two teams are at the top of the Conference USA East Division just 12 days away from the conference tournament.

Both of these teams are on seven-game winning streaks with MTSU defeating Marshall on Thursday. The last team to beat WKU was the Blue Raiders, at the end of January.

In that first matchup, MTSU came into Diddle Arena and shot the lights out, hitting 15 threes and leaving with a 95-83 victory.

There was a lot of offense in the first game, but for this one, defense will be a big part of the game on both sides. Since giving up those 15 threes, WKU’s defense has stepped up tremendously behind the three-point line, holding teams well below their average.

“As much as the focus is about them, really it’s about us,” Justice said. “We’re playing as well as anybody in the conference right now so it’s important for us to stick to what we’re doing and playing with our principles and our concepts and stuff like that and just try to come out of there with a win.”

A big part of the winning streak for WKU is their ability to knock down the long range ball at a consistent rate. The Hilltoppers are making their shots at the charity stripe count. In that first game, WKU shot 42% from three but shot 16-of-27 from the free throw line.

MTSU is the second best defensive team in the conference when guarding the three-point line, only allowing opponents to hit at a 32% rate. The Blue Raiders went 32-of-35 from the free throw line in their most recent matchup to close out Marshall.

“I think our focus is defensively,” Justice said. “They run a chaotic offensive where they pass it and let their five man dictate a lot, set a lot of screens, a lot of movement. So communication has to be good, focus has to be high.”

Senior Jairus Hamilton injured his patella against Old Dominion and his status is still unknown for the upcoming game. He hasn’t practiced all week but has done individual work.

“It’s nothing for certain either way but for sure it will be a game time decision at best,” Stansbury said.

With Florida Atlantic dropping to fourth place in the division, a win for WKU would move them one step closer to locking up the two seed in the east division, giving them a double-bye heading into the conference tournament. MTSU is undefeated at home for the 2021-22 season.

WKU will play Middle Tennessee in Murfreesboro, Tenn., Saturday evening at 6 p.m. The game will be broadcast on ESPN+.