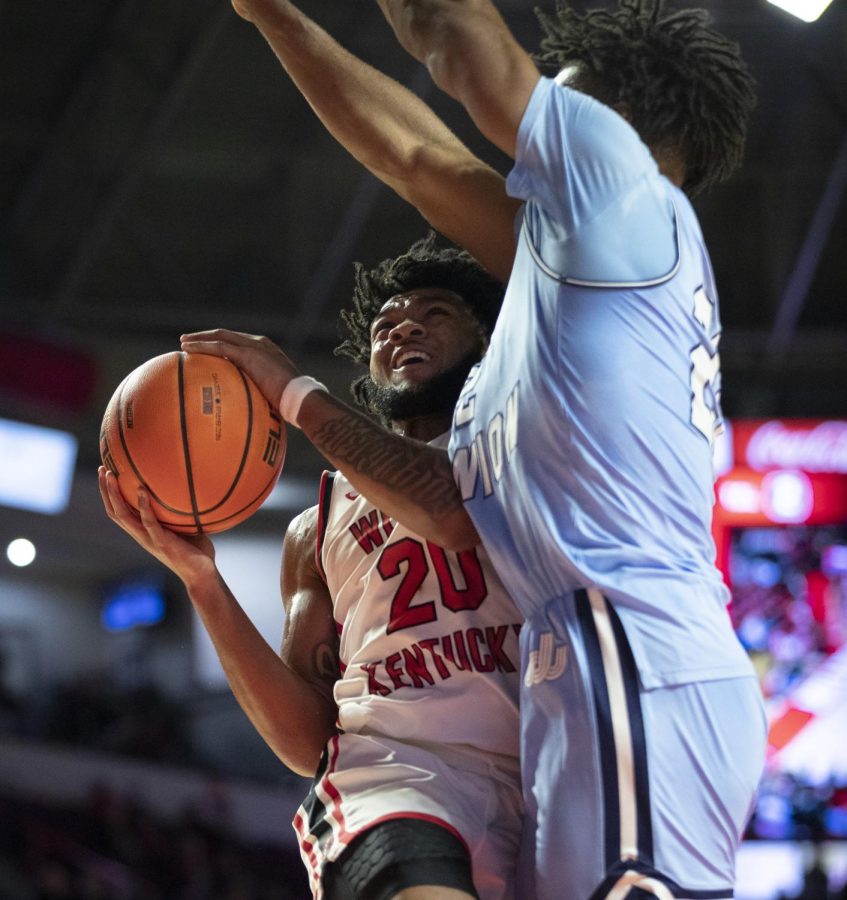 Guard Dayvion McKnight drives in for a layup against Old Dominion on Saturday, Feb. 19. WKU won 73-64.

“As a coach, as a player, as a teammate, all you ask of each other is to make sure you give everything you got,” WKU head coach Rick Stansbury said. “I can’t remember one play anywhere where we didn’t try to play with effort. We knew it wasn’t going to be easy coming in here, but again, our guys fought.”

It was announced before the game that seniors Jairus Hamilton and Luke Frampton were not available due to Hamilton’s patella injury and a non-COVID illness for Frampton. Jaylen Butz was available after missing the last couple games with a foot injury.

Sherman Brashear stepped into the starting lineup for his third start of the season.

With an even shorter bench than normal, it was going to be a tough task for WKU to go into Murfreesboro and pull out the win against a team that’s undefeated at home. WKU made its first substitution halfway through the first half.

It was an action packed, back-and-forth affair in the first half. Arguably the two hottest shooting teams in the conference traded blows for what seemed like forever. WKU connected with shots at the rim while the Blue Raiders continued their hot shooting from behind the arc.

McKnight played aggressive early with his trademark mid-range and high percentage makes at the rim. His play allowed players like Brashear and Anderson to knock down a couple threes early. Brashear knocked down two threes on back-to-back possessions, keeping the game within one score.

“Sherm came in and he had a great game,” Anderson said. “[He] had a couple big shots, and he just played good for us.”

What WKU lacked in depth, it didn’t lack in heart and effort. The Hilltoppers dove for loose balls, making defensive efforts that led to multiple blocks and extending plays.

With the inexperience on the floor, MTSU took advantage, finding the holes in the zone and doing what it does best: shooting from deep. MTSU made seven first half threes and was plus-nine for the half, which ended up being the difference.

WKU struggled with seven turnovers with McKnight and Justice combining for just 11 points on 5-of-20 shooting in the first half. MTSU led 39-30 going into the intermission.

WKU came out of the locker room with a quick seven points that brought the deficit down to two possessions, but MTSU calmed down and went on a 7-0 run that saw the Blue Raiders take their biggest lead of the night at 12 points.

WKU crawled itself back in the game, bringing the deficit to six, but with 5:03 left in the game junior Jamarion Sharp picked up his fifth foul, ending his night. After Sharp left, the Blue Raiders were able to get to the rim easier and put the game away after graduate Josh Jefferson hit a three to put them up 14 with two minutes left.

“When [Jamarion] got out of the game, it kind of offset our offensive game plan,” Anderson said. “We weren’t able to throw lobs up, get the inside pick-and-roll game going, stuff like that. When he’s in the game, he has a big impact on offense and defense and when he left the game it kind of showed.”

After a few days of rest, WKU will head on the road to West Virginia to take on Marshall for the next chapter of the Moonshine Throwdown. The game is set for Wednesday night at 6 p.m.