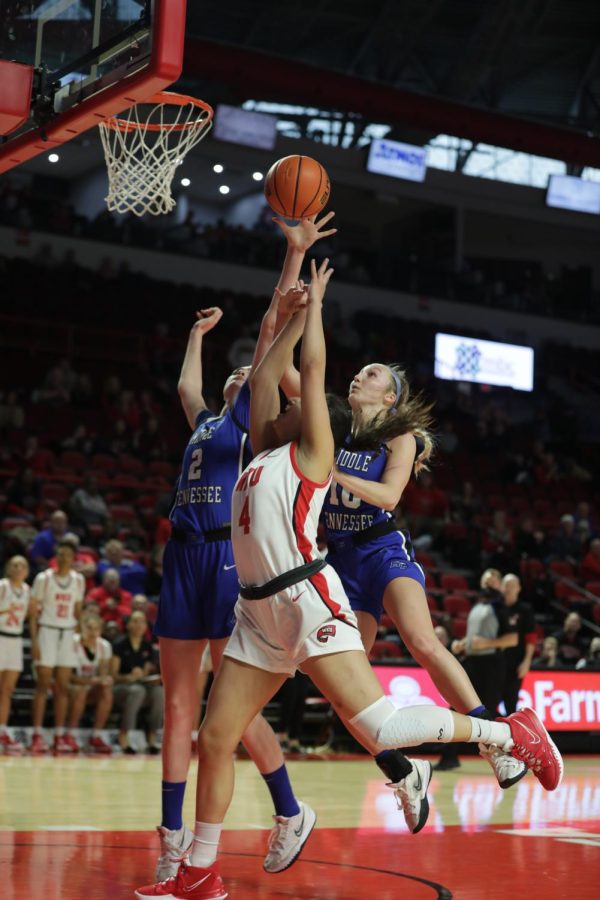 “[Abdelgawad] has brought a great energy from day one,” WKU head coach Greg Collins said. “Especially, when she wasn’t necessarily the best basketball player on the team, but I recognized that she brought the energy and the passion that we needed on the floor.”

The Lady Toppers had a mediocre offensive performance on senior night. They shot a 20-of-55 (36%) from the field and 9-of-29 (31%) from behind the three-point line. They missed a lot of wide-open shots and easy layups and turned the ball over 15  times. Marshall got back in transition the entire night. making it hard for WKU to get easy buckets. The Lady Toppers only scored seven points in transition and five points off the bench.

“On the offensive end, the ball was sticking,” Collins said. “Everybody was dribbling too much in one spot, trying to create by themselves instead of keeping that ball moving and consequently we didn’t get good shots.”

WKU had trouble guarding Marshall the entire game. Marshall shot 31-of-66 (47%) from the field and 8-of-24 (33.3%) from behind the three-point line. WKU lost the rebound battle 39-36 and only forced seven turnovers. Marshall’s seniors stole the show away from Abdelgawad.

“We were either gambling or we were opening up too much, allowing a drive right to the paint,” Collins said. “They just continued to drive the ball to the paint. It forced us to rotate, and they would drop it off or put their players in the rebounding position. We’ve got to do a better job of staying for the ball.”

The Lady Toppers won the tip and Abdelgawad instantly found the ball but airballed the first shot of her senior night. WKU freshman Alexis Mead scored the first points of the game with a three pointer. WKU struggled guarding Marshall on the perimeter in the first quarter. Marshall shot 9-of-15 (60%) from the field and 3-of-6 (50%) from deep. Marshall led 22-19 at the end of the first quarter.

The Lady Toppers opened the second quarter way more disciplined defensively. Sophomore Teresa Faustino provided the defensive spark WKU was missing. She did a little bit of everything in the quarter, making a steal on defense then converting a great pass to freshman Jaylin Foster.

Marshall began the second half on a 10-0 run. WKU went ice cold from the field until halfway in the quarter. WKU’s first points came at the 4:30 mark when Abdelgawad nailed a three.

Marshall dominated WKU in the third quarter. The Lady Toppers were outscored 27-8 in the quarter and shot 2-of-13 (15.4%) from the field.

WKU began the fourth quarter on a 11-4 run, but they faced too big of a deficit for the comeback. WKU outscored the Thundering Herd in the fourth 21-12, but the damage was already done. WKU fell 62-80.

The Lady Toppers will seek revenge against Marshall Saturday at noon at Cam Henderson Center in Huntington, West Virginia.