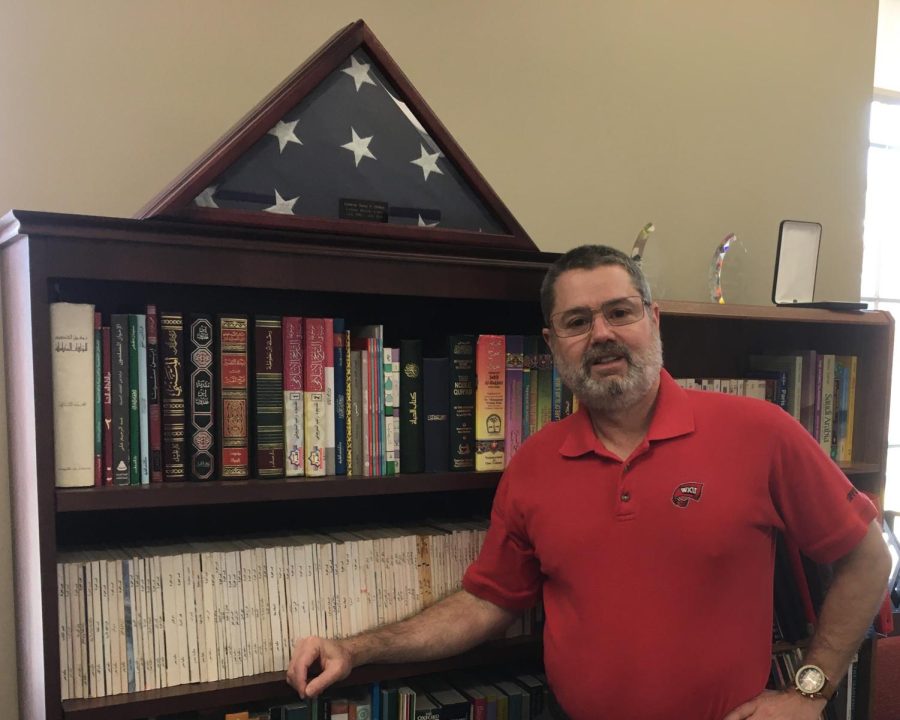 David DiMeo, director of WKU's Arabic program, will be retiring at the end of the school year. "It's been a great experience for me. I say the main thing is the students, they're the fountain of youth," DiMeo said.

The Arabic program at WKU began in early 2014 and has since grown to be an important part of the Modern Languages Department. This was in large part due to the work of David DiMeo.

DiMeo, associate professor of Arabic and the director of the Arabic program, is retiring after working with the program for 10 years. He first arrived in 2012 to help establish the Arabic major program as part of internationalization initiatives by WKU.

DiMeo served in the army for 26 years before coming to the Hill with the purpose to share his knowledge and experience with students. DiMeo reflected on his time with the Arabic program at WKU and explained his decision to retire at the end of this year.

“I said I would stay here as long as it was the right thing to do, because it’s about the students,” DiMeo said. “That’s why I’m here. I came here because I wanted to teach and share and particularly prepare the students for the future…. a lot of things have happened in the past few years that have made that difficult, and we have been trying to bounce back for a long time. Based on that, that’s why I’m leaving. I believe that this is the right thing.”

DiMeo deeply values the work that he has seen those in the Arabic program accomplish and dedicated his performance as a professor to providing them the resources they need.

“Most of the students we have coming here are looking to do something important in the world,” DiMeo said. “I have a lot of students who come here wanting to work with refugees, a lot want to work for the government, want to work for the military. They want to make contributions to society and that’s a great thing. It’s the enthusiasm right there. As long as we can provide them what they need, then that’s why I’m here.”

The advice DiMeo leaves for his students is that it is vital for them to continually learn within all fields.

“I think the main thing I tell them is never, never stop learning,” DiMeo said. “No matter how old you get – I mean, I’m old, but I still take courses – I’m still studying things outside my comfort zone, because to be human means to keep learning. That’s what separates us from any other life form out there. Never stop learning and never stop moving outside of your comfort zone to learn about new people in new perspectives.”

DiMeo is one of two Arabic instructors within the Modern Languages department and his retirement raises concerns about the future of the Arabic program. He explained that there are many factors that will affect the upkeep of the program.

“I think it’s very important to establish that this is no one’s fault,” DiMeo said. “The university is very dependent on the external support it can get, and we know we’ve been going through a budget crisis, which is because a lot of things have changed in the country and in the world. They’re just not able to do everything that they want to do and what we used to do five years ago, and I totally understand that. It happens though, that particularly the Arabic language program, is very heavily dependent on that external support.”

DiMeo explained that Arabic is one of the hardest languages to learn, and three hours a week of classroom learning simply is not enough to become  fluent in the language. In the past, the program used to work with Saudi students at the university and there would be several hours of language training, often one-on-one, outside of the classroom. However, this resource was lost, so it has become much more difficult to achieve this personalized training.

“All of these things come together and have had a huge impact, particularly losing the language requirements at WKU had a huge impact on us, on Arabic in particular, because it’s not a language students take in high school,” DiMeo said. “They take Chinese, they take Spanish, so they will continue when they come here. The language requirement was basically the only way we recruited people in. All that has really changed our ability to provide, and again, it’s nobody’s fault. The world has changed, the country has changed, the economy has changed, and so forth. So it’s based on a consideration of all those factors. That’s why I am retiring.”

DiMeo deeply values the experience he has had at WKU and is thankful to have seen the enthusiasm for learning within his students. DiMeo is not going to another job, but he will continue other projects, such as writing and working on his podcast titled The Golden Age of Islam.

“It’s been a great experience for me. I say the main thing is the students, they’re the fountain of youth,” DiMeo said. “In this world, where most of the world is very cynical, pessimistic and complaining, this is one of the few places where you find people who are looking to the future, who are excited, who want to do good things. This is not the attitude you find in the general public or on TV or on the radio or anything like that. That is something that’s very, very special. I will definitely miss that. I’m not going to another job in another place, but I’m going to continue working on Arabic. I have two books right now that are under contract, and I’m a series editor for another series of books that we’ll be working on. And I want to work on my podcast.”

Alexander Poole, head of the Department of Modern Languages, spoke on the impact that DiMeo has had on the department and on the Arabic program in particular.

“He really built the infrastructure of the Arabic program, and he put the curriculum together,” Poole said. “He has such a unique perspective. Because not only does he have an academic background in Arabic, but he has years of government service experience. So using that, not only to teach students of language but to really help foster careers for them, I think it’s been an extraordinary part of what he’s done…it’s great to have a faculty member who can not only do scholarship, but is interested in curriculum development, with an eye on professional opportunities for students.”

Poole explained his hopes for the Arabic program going forward, focusing on growing the program through recruitment of more students after the pandemic made recruitment opportunities difficult.

“The Arabic program will continue at WKU,” Poole said. “We have Professor Guerwane, who is excellent, and we’re looking to grow the program, to get more students in it, especially after COVID, which has been difficult on the university. We really think that we can grow the program and get lots of good students, and especially since we have border scholarships, we can attract a broad range of students, because this program is very unique, and there are very few Arabic programs at all in the area.”

Poole understands that DiMeo’s retirement is a loss for the department and explained how it will be challenging to move forward without such a respected and knowledgeable faculty member.

“As far as having a faculty member here, who is knowledgeable, who is steady, who understands the infrastructure and understands the language, it is a loss, it’s a great loss,” Poole said. “Because he is someone who’s very dependable, who is competent, who does the right thing and who is very knowledgeable, and I think whenever a person like that retires, even though retirement is normal, it’s a bit of a shock. Because with all these things going forward, you’re going to miss those things, but you probably won’t feel them until they’re actually gone. I think that having someone like him is not very common in the world, someone with so much experience and knowledge. It’s very rare.”

Poole was most complimentary of DiMeo’s vast array of skills inside and outside the classroom. He explained DiMeo’s unique skill set as a professor and how he used this to truly serve WKU students.

Aurora Speltz, a sophomore Arabic, Spanish and international affairs major, spoke on her experience with DiMeo and the influence he has had on her studies.

“Dr. DiMeo has been one of the most influential professors at Western for me,” Speltz said. “I came to WKU for the Arabic program, and I’m so thankful that I did. Dr. DiMeo recommended that I study abroad in Jordan last semester, which has been the most rewarding experience I have had so far at WKU. I met my best friends in an Arabic Lit class he taught. I’m going to miss him so much.”